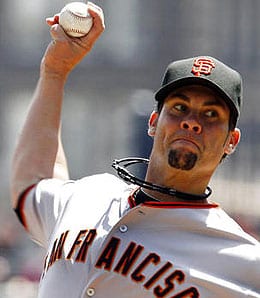 Ryan Vogelsong will likely head back to Nowheresville this year.

The 2012 RotoRob MLB Draft Kit continues today with Buck checking in to tell us who to avoid. So while you wonder if Yoenis Cespedes will live up to his hype (don’t worry — he didn’t make this list), let’s take a closer look at this year’s Top 10 Busts.

“Bust” is a strange word indeed; in one connotation, it elicits nearly universal good feelings among Fantasy owners — at least those with a “Y” chromosome. In fact, some legendary busts have been known to inspire song, prose or random acts of Pavlovian foolishness. But that’s not the type of bust we’re here to talk about — though we’re not ones to miss a chance for a random gratuitous off-site link. No, the topic of the day is the kind of bust that is the bane of Fantasy owners everywhere: players who are not likely to duplicate their breakout 2011 numbers. The terms “bust” and “overvalued” are sometimes used interchangeably, but we tend to think of overvalued players as those who fetch more than their potential return due to outside or subjective factors; Derek Jeter and Jason Varitek were good examples in years past.

Our list of potential busts should not be construed as a “do not draft” list; rather as a caution flag. Most of these players will carry significant Fantasy value in 2012, but if you draft them based on their lofty 2011 performances, you’re probably going to be disappointed.

Ryan Vogelsong, SP, San Francisco Giants: Vogelsong’s outstanding 2011 season came out of nowhere, and we’re betting that his 2012 campaign will head back toward nowhere. His BAA jumped from .226 in the first half to .262 after the break, and his lofty 80.4 per cent strand rate is probably not repeatable. Vogelsong struggled to a 3.57 ERA and 1.39 WHIP away from San Francisco’s pitcher-friendly confines, and his 3.06 BB/9 rate last season was a far cry from his career standard of 3.91. Want more? Okay, 2011 marked the first time the 34-year-old had won more than six games in a season, posted an ERA below 4.43 or tossed more than 133 innings. He’s battled a back problem all spring, and might open the season on the DL. Let someone else take the chance; the clock looks to be striking midnight on this Cinderella story… good luck getting home in that pumpkin, Cindy.

Curtis Granderson, OF, New York Yankee$: The Grandy Man handled southpaws like never before in 2011, smacking out an absurd 24.6 HR/FB rate. While he’s only a career .226 hitter against lefties (with an equally underwhelming 685 OPS), he somehow managed to post a .272/.347/.597 slash line against portsiders in 2011. Granderson obliterated his career highs in runs (136 – previous best 122), homers (41, up from 30) and RBIs (119, from his old high of 73) last year, and it’s tough to buy in on the sustainability of that kind of breakout. Granderson should be very good again, especially in the potent Yankee lineup, but be careful not to expect a repeat of his gaudy 2011 numbers.

Aramis Ramirez, 3B, Milwaukee Brewers: There’s no cooking like home cooking: Over the last three seasons at Wrigley Field, Ramirez has batted .329 with 35 homers and 138 RBI and 85 strikeouts. Outside the Friendly Confines, though, A-Ram has managed just .246 with 31 bombs, 103 RBI and 117 strikeouts. He enjoyed a fine season in 2011, but his .306 batting average was buoyed by both a career-high 23.6 line drive rate and a beefy .332 BA at Wrigley (remember that whole “home cooking” thing?). “Home” is now Miller Park, where Ramirez has posted a rather pedestrian .270-15-62 line in 300 career at-bats. Ramirez should again be a solid source of power at third base this year, but expecting a batting average very far north of .280 would be a mistake.

Derek Holland, SP, Texas Rangers: Holland was 8-1 with a 2.53 ERA and 1.01 WHIP during July and September, but he offset those two torrid months with four months’ worth of mediocrity — or worse. Holland’s 2011 effort included 16 wins, but keep in mind that he enjoyed the most run support of any regular starting pitcher in baseball. Now, the Rangers figure to provide plenty of runs again in 2012, but be careful: Holland’s 3.95 ERA and 1.35 WHIP last season was a hefty price tag for those 16 tallies. His strikeout pitch is serviceable, but Holland’s increasing susceptibility to the long ball is troubling given his hitter-friendly home yard. Oh, by the way — he served up a 4.69 ERA, 1.56 WHIP and .292 at Rangers Ballpark last year, so he’s far from a “pencil him in” Fantasy option.

Ricky Romero, SP, Toronto Blue Jays: Some think that Romero could be on the cusp of Fantasy stardom, and it’s easy to see why given his stellar season in 2011, but a closer look at the numbers gives us cause for pause. First stop is the .242 BABIP he posted a season ago — which rendered him as one of the game’s luckiest starting pitchers. It’s doubtful that Lady Luck will smile so broadly again in 2012, or that Romero will duplicate the 79.2 per cent strand rate he logged in 2011. Romero has had an exceptional spring, and he should be owned in every Fantasy league… but don’t expect a repeat of his stellar 2011 season.

Asdrubal Cabrera, SS, Cleveland Indians: Cabrera’s power spiked in a big way last season, as he more than quadrupled his previous career high in dingers and tacked 24 ribbies onto his former career best. Such a breakout from a veteran player, however, always raises a due degree of doubt as to whether those lofty numbers can be repeated — and in this case, the internal numbers say “no.” For example, after batting .330 in May, Cabrera saw his average drop each month thereafter, and he managed a lackluster .244 in the second half. There is a school of thought that Cabrera’s power surge may have gotten into his head a bit, and he started trying to jerk everything out of the park — and his 19.3 per cent strikeout rate after the break seems to support that. Look for a regression towards normal for Cabrera this season: think .275-12-70 with about 15 steals and you should be in the neighborhood.

Jeremy Hellickson, SP, Tampa Bay Rays: Hellboy must have been carrying a pocketful of shamrocks last season, as his .223 BABIP was the lowest among starting pitchers by a considerable margin. He was an elite strikeout artist during his career in the minors, but his K-rate fell to just north of five during the second half of the 2011 campaign. What’s more, his walk rate — which was just 2.1 per 9 in the minors — ballooned to 3.43 last season. Those shamrocks had to work overtime to keep Hellickson’s numbers under control, and we’re betting that his luck runs out in 2012. Don’t overreact; Hellboy still has a fine future in this game, but don’t draft him expecting another sub-3.00 ERA. We think his walk rate will recover, but it’s hard to imagine him striking out more than about 6.5 or 7 batters per nine innings.

Michael Bourn, OF, Atlanta Braves: No one doubts that Bourn can absolutely fly; he’s averaged 58 stolen bases over his last three seasons. Unfortunately, there have been occasions where he runs like Hayes, but hits like s***. (RIP James Gammon). Willie Mays Hayes… errr… Bourn lacks pop, but his batting average has been about as consistent as Lady Gaga’s hairstyle over the past few seasons. He posted a career-high .294 last season, but that number was buoyed by an exceptionally high .369 BABIP. Keep in mind that Bourn’s low contact rate (19.4 per cent strikeout rate in ’11) should moderate his average in 2012; without a strong BA, Bourn is just another one-trick Fantasy pony.

James Shields, SP, Tampa Bay Rays: Boy, you think you know a guy, and he goes and does something like this. Shields had struggled through a pair of subpar seasons (with 2010 being an unmitigated disaster), and then he proceeded to destroy just about all of his career marks in virtually every category last year. Shields had just five career complete games and two shutouts before logging 11 and four, respectively, last season. He eclipsed 200 strikeouts for the first time, and his ERA was over a full run below his career norm. Will Shields fall back in 2012? Undoubtedly; it’s how far he’ll fall that’s the point of debate. Believers will say that he tweaked his delivery over the 2010-11 offseason, and that made all the difference, while doubters will point to his .258 BABIP, and say that he’s bound to bounce back to something closer to his career standard of .299. We think that Shields should be a solid part of any Fantasy rotation in 2012, but prospective owners should not pay for his elite 2011 numbers.

Hunter Pence, OF, Philadelphia Phillies: Up until last season, Pence was what he was: a solid five-category guy that did everything fairly well, but didn’t produce elite numbers in any one category. That was before he laid a .314 batting average on the board in 2012, prompting some Fantasy owners to think that he had taken the next step toward superstardom. Not so fast, fan boy: Pence reaped the benefit of a lofty .361 BABIP last season, and a regression toward his career norm of .328 should be expected in 2012. Remember that whole “does everything pretty well” thing we started out with? Last year, not so much for Pence — he all but stopped running after arriving in Philly, attempting just two stolen bases in 54 games, and dropped below 11 steals for the first time in his career. Pence is a nice hitter who should once again provide solid four-category support in 2012, but if he’s not running, Fantasy owners need to count on Pence landing another date with Lady Luck in order to justify his draft-day price.

By Buck Davidson
This entry was posted on Tuesday, March 27th, 2012 at 1:07 pm and is filed under 2012 RotoRob MLB Draft Kit, BASEBALL, Buck Davidson, Busts, Cheat sheets. You can follow any responses to this entry through the RSS 2.0 feed. Responses are currently closed, but you can trackback from your own site.