The Wire Troll: The Emergence of Jake Locker 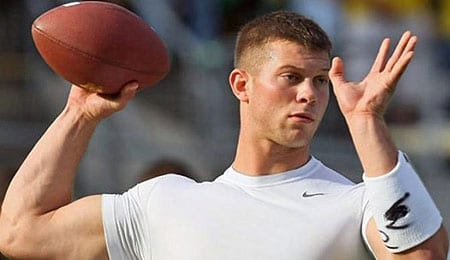 With Jake Locker, the future is now in Tennessee.

Welcome to the Week 15 edition of the Wire Troll. Well, if you’re still with us, it must mean that your playoff run is still steaming along; welcome to the semis, you Fantasy monster, you. Congratulations on your 2011 season; hopefully the Troll’s sage advice has helped you through a few of the rough patches every great campaign has to overcome.

A couple of big pieces of injury news top the Fantasy headlines this week: Cowboys running back DeMarco Murray’s fractured ankle cost many a Fantasy owner (sadly, the Troll was among them) a victory in Week 14, and Felix Jones is in line for an enormous workload as Dallas’ feature back. Out on the wing, Green Bay wideout Greg Jennings is probably done for the rest of the regular season after suffering a sprained MCL in the Packers’ win over Oakland. While the Jennings injury is a devastating blow to Fantasy owners, perhaps some savvy work on the wire can overcome this adversity.

There is some good news to report, as Adrian Peterson is expected to return to the Minnesota backfield Sunday, and AP’s arrival could not have come at a batter time for his forlorn Fantasy owners.

Good luck in Week 15 and for all of the latest waiver wire-worthy updates, don’t forget to follow the Troll and I on Twitter.

Reminder: There is a Thursday night game (Jacksonville at Atlanta), and a Saturday night game (Dallas at Tampa Bay). Be sure to get your lineups in on time.

Jake Locker, Tennessee Titans: Locker took over for Matt Hasselbeck after the starter suffered a calf injury Sunday, and completed 13 of 29 passes for 282 yards and a touchdown. Though Locker came up five yards short of a victory, his performance was impressive enough that he may earn the start Sunday against the woeful Indianapolis Colts. Locker has a cannon for an arm, and the rookie should be able to amass some decent numbers against Indy’s soft secondary. Consider adding him in two-quarterback formats and he’s a must-add in dynasty leagues.

Andy Dalton, Cincinnati Bengals: Dalton has really settled into the starting role in Cincinnati, and has tossed at least one touchdown pass in 10 straight games. He’s faced a pair of tough defenses in Pittsburgh and Houston the past two weeks, but he draws the Rams’ patchwork secondary in Week 15. If you choose to rotate your quarterbacks based on their match ups, you’ll find few tastier pairings than Dalton vs. the Rams; roll him out there with confidence.

Felix Jones, Dallas Cowboys: With Murray sidelined, Jones came up big — logging 16 carries for 106 yards and adding 31 yards on six receptions. Jones has had a disappointing season, but with Murray out of the picture, he should be the focus of the Cowboys’ ground attack for the rest of the season. Jones has always been a fine receiver, but nagging injuries and ineffectiveness at the goal line have limited his Fantasy value. He’ll have every opportunity to prove himself in the coming weeks, though, so add Jones immediately — unless you already have him thanks to being one of our Twitter followers.

Donald Driver, Green Bay Packers: With Jennings on the sidelines for 2-to-3 weeks, Driver’s role in the offense is bound to expand. While that won’t make him a weekly Fantasy option, it could sneak him onto the radar as a flex play in deeper leagues. The veteran snagged four receptions for 75 yards Sunday, and he was targeted six times.
James Jones will also see more targets, but the Troll likes Driver’s experience and consistency — especially at playoff time.

Demaryius Thomas, Tim Tebow (featuring the Denver Broncos): Thomas looks to be establishing a solid rapport with The Tim, snagging 11 receptions for 222 yards and three touchdowns over the past two games. Thomas is beginning to fulfill his vast potential, but with The Tim under centre, it’s hard to count on any receiver to put up big numbers in any given week. If you’re suffering from the Greg Jennings Blues, though, perhaps a shot of Thomas Tonic will soothe your GameDay ills.

Evan Moore, Cleveland Browns: Yes, Evan Moore. If your league is deep enough, Moore could be a nice play Sunday if he stands in for starter Ben Watson, who suffered his third concussion of the season in Week 14. The Browns love to throw to their tight ends, and Moore could see a steady stream of footballs heading his way if he indeed earns the start. Keep an eye on Watson’s status, but given the scrutiny on the Browns’ concussion policy lately, it would not be at all surprising to see Watson sit out Week 15.

Arizona Cardinals: The Cards are on a roll, having won five of their last six games while allowing an average of just 15.2 points per game during that period. Cleveland, meanwhile, has averaged just less than 11 points per game over its last eight outings. The Browns’ quarterback situation is dicey at best, so this looks like an offense that should struggle against Arizona’s improving D. The Cards might be worth rolling out in deeper leagues if your regular defensive unit has a tough matchup this week.

Jason Worilds, LB, Pittsburgh Steelers: Worilds was nothing short of spectacular whilst filling in for the injured LaMarr Woodley last week — racking up nine total tackles and a pair of sacks. Woodley will probably be back in Week 15, but now that James Harrison is facing a suspension, all eyes turn to Worilds to fill his big shoes. Worilds makes a fine plug-in for deeper IDP formats, and dynasty league owners should definitely give the Pittsburgh rookie a very long look.

By Buck Davidson
This entry was posted on Wednesday, December 14th, 2011 at 2:05 pm and is filed under Buck Davidson, FOOTBALL, The Wire Troll. You can follow any responses to this entry through the RSS 2.0 feed. You can skip to the end and leave a response. Pinging is currently not allowed.