The Wire Troll: The Return of Kevin Kolb 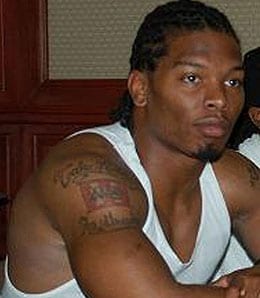 Marion Barber will shed his wife beater and step into a full-time role for Da Bears.

Welcome to the Week 14 edition of the Wire Troll. If you’re reading this article for some reason other than the random gratuitous cheerleader photos we’ve been slipping in over the past few weeks, congratulations and welcome to the playoffs. Most Fantasy leagues start their second seasons this week, so big ups for still being in the hunt; hopefully the Troll has helped to make it all possible.

Now that the backslapping is out of the way, let’s get to work. We have yet another major injury to deal with, as Fantasy bellwether Matt Forte will miss two-to-six weeks with a sprained knee. The Troll sent his Twitter followers to the wire not long after Forte went down; backup Marion Barber was the recommended pickup. We’ll have more on him later. There’s more bad news than usual from D.C. this week, as Redskins tight end Fred Davis will be suspended for the next four games due to a failed drug test. Unfortunately, there’s no clear substitute for Davis on the Redskins’ depth chart, so his Fantasy owners will have to look elsewhere to replace their missing stud.

Not all of the news is bad, though: Michael Vick is expected back Sunday, and his return comes not a moment too soon for Vince Young’s Fantasy owners. Dallas wideout Miles Austin should be back in action Sunday night, and the word from Vikings coach Leslie Frazier is that Adrian Peterson is “very close” to returning from his high ankle sprain. You can of course keep up with all of the latest waiver-wire Fantasy news by following the Wire Troll and Buck on Twitter.

Reminder: There is a Thursday night game: Cleveland at Pittsburgh… be sure to get your lineups in on time.

Kevin Kolb, Arizona Cardinals: John Skelton played more like Red Skelton in Week 12, thus opening the door for Kolb to reclaim his starting job. Though he was seeing his first game action since suffering a toe injury in Week Eight, Kolb passed for 247 yards and a touch to lead the Cards to a victory over Dallas in Week 13. He faces a tough matchup against San Francisco Sunday, but Kolb could provide a decent insurance policy should your starting signal-caller go down during the playoffs.

Marion Barber, Chicago Bears: With Forte on the shelf and the Bears’ passing attack lethargic at best, Barber figures to see a fairly heavy workload for at least the near future. That may not translate into big Fantasy points, though, as Chicago will face plenty of eight-man fronts if it can’t get the aerial game going. Barber is a capable back, though, and should be a decent flex option as long as Forte is sidelined. Kahlil Bell will see plenty of action, mainly on passing downs, but he’s probably not worth a look at this point.

Ryan Grant, Green Bay Packers: James Starks suffered a sprained ankle in Week 13, and it would behoove the Packers, who have already locked up the NFC North title, to allow him plenty of time to heal. Grant was unimpressive after Starks departed, and has suffered through a disappointing year, but he would be in line for a heavy workload as the Packers’ feature back. Add Grant in most leagues, but don’t slot him into your lineup until you’ve verified Starks’ Week 14 status.

Ricky Williams, Baltimore Ravens: Ricky handled the rock 16 times for 76 rushing yards and a touchdown in Week 13’s blowout against the Browns, and similar garbage-time goodness could be in store Sunday against the defensively-deficient Indianapolis Colts. Williams is far from a sure thing, but if you’re in a deeper league or your backfield is riddled with injuries, he could pay some big dividends.

Golden Tate, Seattle Seahawks: Sidney Rice’s concussion will sideline him for the remainder of the season, leaving Tate as the No. 1A (with Doug Baldwin) wideout in Seattle. That’s fine, but remember that with Tarvaris Jackson under centre, it’s hard to get too excited about any Seahawk receivers. Even so, in Week 14 the ‘Hawks face a patchwork Rams’ secondary that may again be without starting safety Darian Stewart. Tate’s 4-47-1 line in Week 13 was encouraging, but he’s still no more than a flex play in deeper leagues until he better establishes himself in the Seattle offense.

Malcolm Floyd, San Diego Chargers: Floyd returned to the lineup In Week 13 after a four-game absence, and announced his presence with authority by posting 108 receiving yards and a 52-yard touchdown against Jacksonville. When healthy, he is a dangerous deep threat who serves as a fine complement to top wideout Vincent Jackson; while Floyd won’t pile up the receptions, his quick-strike ability makes him a fine Fantasy option in leagues that reward long scores. The downside of his return is that it severely deflates the Fantasy value of Vincent Brown, who had enjoyed some nice moments as the Chargers’ No. 2 wideout. Floyd is available in about 55 per cent of Yahoo! leagues, and he is a solid option as roster depth or as a flex option going forward.

Seattle Seahawks: Seattle completely shut down the Eagles’ passing game in Week 13, and the ‘Hawks have been solid defensively over the past four games. In Week 14, they host the reeling St. Louis Rams, whose offense ranks last in points and next-to-last in yardage. While Seattle probably isn’t start-worthy in most formats, it is definitely worth a look if your main defense is facing a touch matchup in Week 14.

D.J. Williams and Von Miller, LBs, Team Tim Tebow (featuring the Denver Broncos): Williams has quietly (which is the way non Tim Tebow-related things happen in Denver these days) racked up 36 total tackles, one sack and two forced fumbles over his last four games. Keep in mind that Williams has amassed at least 119 total tackles in each of his last three full seasons, so he definitely has a nose for the football. Miller, meanwhile, has accounted for 19 total tackles and three sacks over his last two games, but he was inactive in Week 13 due to surgery to repair torn ligaments in his right thumb. If he’s back in the mix in Week 14, Miller makes a great add if you need a play-making linebacker.

By Buck Davidson
Tags: Kevin Kolb
This entry was posted on Wednesday, December 7th, 2011 at 1:03 pm and is filed under Buck Davidson, FOOTBALL, The Wire Troll. You can follow any responses to this entry through the RSS 2.0 feed. Both comments and pings are currently closed.