The Wire Troll: Chris Paddack Aims to Turn Things Around on Twins 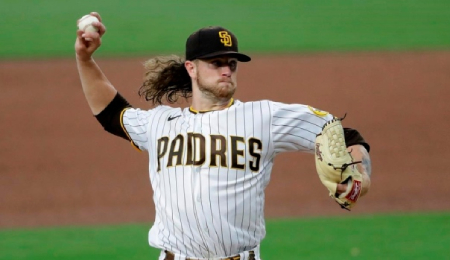 Chris Paddack could be a major steal for the Twins. (The Canadian Press)

Welcome back to another season of Fantasy baseball. By now you know the drill: we never pimp anyone with more than 50 per cent ownership in either ESPN or CBS leagues, because we want to only recommend players that you can actually add to your team. What a concept! At any rate, best of luck in the 2022 Fantasy baseball season.

This week, the Mariners locked up their defensive whiz shortstop J.P. Crawford for five years; Shohei Ohtani brought early heat in pitching the Halos’ opener, racking up nine punchouts in just 4 2/3 innings; and Ronald Acuna Jr. opened up about his rift with Freddie Freeman.

And now, let’s get to the season’s first batch of…

Chris Paddack, SP, Minnesota Twins (ESPN: 7.2 per cent; CBS: 22 per cent): Paddack was a top 30 prospect in 2019, graduating from our Top Prospects list in 2020, so we know the pedigree is great and the potential upside high — possibly even ace high. He’s been dealt to Minnesota, giving him a glorious opportunity to get his career back on track as he’s been regressing since his superb rookie effort with the Padres in 2019. Yes, last year was a struggle for Paddack to stay healthy, but he has the type of body that should make him a serious workhorse capable of gobbling up innings, so assuming he’s back to 100 per cent, he’s a major sleeper. Check out the video below for a reminder of what he can do when he’s on.

Reiver Sanmartin, SP, Cincinnati Reds (ESPN: 6.2 per cent; CBS: 11 per cent): Sanmartin showed enough promise in his brief taste of the bigs last year that he’s now the No. 2 man in the Reds rotation. The southpaw went undefeated in two very impressive starts last season, making him another serious sleeper worthy of grabbing early to see how things play out. Yes, Sanmartin had a rough debut Friday, but we expect much better from him going forward.

Connor Joe, OF, Colorado Rockies (ESPN: 4.6 per cent; CBS: 28 per cent): In August we recommended Joe because of his raw power and, while he was getting on base like mad in the first days of September, a hammy woe shortly thereafter cost him the rest of the season. We’re giving him more love now because the Rox really want to get more power from their OF, so he should be a regular in the lineup (either at DH or OF) and he’s already proved he can be an above average player (105 wRC+ last year). Joe got off to a nice start with a single, walk and run on Friday.

Greg Holland, RP, Texas Rangers (ESPN: 0.4 per cent; CBS: 11 per cent): We last recommended Holland in mid-September 2020 when he took over KC’s closer after Trevor Rosenthal was dealt. Holland was spectacular over the final month, but really regressed last year. Now, we’re back to give him another look as the possible closer in Texas after he made the team and the Rangers seem reluctant to keep Joe Barlow in the role. It doesn’t hurt that another strong contender in Jose LeClerc (elbow) may not be back until early June, so Holland could provide early-season saves, although for what it’s worth he did give up a dinger in his season debut on Friday.

David Robertson, RP, Chicago Cubs (ESPN: 6.9 per cent: CBS: 32 per cent): It’s been several years since Robertson was last closing regularly, but he shut the door with a pretty clean ninth inning on Thursday (his first save since 2018), so perhaps it’s his job — not Rowan Wick‘s (who struggled in the eighth). Pick up Robertson and see how this plays out.

Albert Pujols, 1B, St. Louis Cardinals (ESPN: 3.7 per cent; CBS: 4 per cent): Pujols’ return to the Cards didn’t exactly get off to a great start (0-for-5), but he still proved very productive in a part-time role last year, so consider him an deep NL-only league option.

Sean Murphy, C, Oakland Athletics (ESPN: 49.3 per cent; CBS: 34 per cent): Murphy got stuck in a timeshare last year for a while, and his hitting regressed for a second straight season. However, his counting cat totals all rose and after Oakland’s big sell-off, he finds himself batting third to start this season, so is primed to be a highly productive catcher (he doubled and scored in the opener on Friday). Someone has to hit for Oakland, right?

Adam Frazier, 2B, Seattle Mariners (ESPN: 33.9 per cent; CBS: 30 per cent): Frazier was dealt to the Padres in late-July and in November was sent to Seattle in a low key move that could pay big dividends. He’s going to hit leadoff in a vastly improved batting order and given the dramatic improvements he made in his strike zone judgment last year, he could score a ton of runs. Ignore Friday’s tough start and grab Frazier.

Andrew Vaughn, OF, Chicago White Sox (ESPN: 12.5 per cent; CBS: 46 per cent): How about a post-hype sleeper? Vaughn was No. 7 in our rankings before graduating from our Top 100 Prospects list this year. He had a hip issue early in camp but is healthy now and ready to rock (going yard in the season opener), and given his power potential, his sophomore season is definitely one to track. Food for thought: Vaughn’s exit velocity last year matched that of Pete Alonso.

Here’s yet another track from The Last Waltz, The Band‘s farewell concert album. This is “Out of the Blue,” from “The Last Waltz Suite” by The Band.

By RotoRob
This entry was posted on Saturday, April 9th, 2022 at 11:17 am and is filed under BASEBALL, RotoRob, The Wire Troll. You can follow any responses to this entry through the RSS 2.0 feed. Both comments and pings are currently closed.