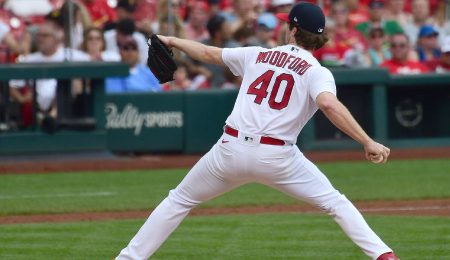 Jake Woodford could be a useful asset down the stretch. (Viva El Birdos)

Welcome back to another week of Fantasy baseball. We’re now in the season’s final stretch and your playoffs have likely begun. This is your last chance to pick up something useful from the wire!

This week, the Jays laid a beat down on the Yankees, massively tightening up the AL Wild Card race; former big league Mike Montgomery lost his shit while pitching in the KBO; and MLB has adamantly shot down Hunter Renfroe‘s allegations that the Red Sox were instructed by the league to stop doing Covid-19 testing during its current outbreak.

Jake Woodford, RP/SP, St. Louis Cardinals (ESPN: 1 per cent; CBS: 1 per cent): A relative unknown, Woodford shifted into the injury-ravaged Cardinal rotation in mid-July and had a solid first start before struggling the rest of the month and getting farmed out. However, he’s looked like a different pitcher since being recalled last week. Woodford tossed 5 1/3 shutout innings at a very good Brewers’ squad and followed that up on Thursday with four sharp frames against the Dodgers (including three punchouts, as you can see in the video below), giving him a 0.96 ERA in September. That’s some impressive opposition to look good against, so consider giving him a chance down the stretch. Woodford has managed to reduce his medium-hit contact while raising his soft-hit contact, so he’s clearly made strides since his debut last season. It’s been a slow rise up the system for the 24-year-old righty, but remember that this dude was a first round supplemental pick (39th overall) back in 2015.

Lucas Luetge, RP, New York Yankees (ESPN: 0.5 per cent; CBS: 1 per cent): The Yanks suffered another bullpen loss when Jonathan Loaisiga (rotator cuff) landed on the IL. Considering how effective he’s been this year, this leaves a substantial hole in the bullpen, giving Luetge an opportunity for more responsibility for the rest of the season. Luetge has been around for some time, but has never really been a Fantasy factor — especially considering that before this season, he hadn’t pitched in the bigs since 2015. So no, he’s obviously not exactly a future Hall of Famer, but he’s been really strong this season, taking a workhorse role and proving tough to hit. Luetge has managed to lower his exit velocity since he last pitched in the majors and has put up a career-best line drive rate. He could prove useful in AL-only leagues this month.

By RotoRob
This entry was posted on Friday, September 10th, 2021 at 6:54 pm and is filed under BASEBALL, RotoRob, The Wire Troll. You can follow any responses to this entry through the RSS 2.0 feed. Both comments and pings are currently closed.