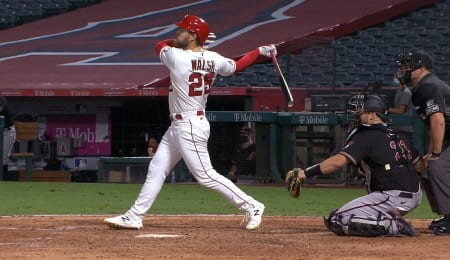 Jared Walsh has come out of nowhere to mash for the Halos. (Yahoo Sports Canada)

This week, air quality issues in Washington forced the Padres-Mariners series to get shifted from Seattle to San Diego; the Dodgers became the first team to clinch a spot in the postseason, earning an eighth straight playoff berth; and Jacob deGrom‘s chances for a third straight Cy Young award took a hit as his hammy acted up on Wednesday.

And now, let’s get to the season finale of the 2020 MLB Wire Troll…

Matt Carpenter, 3B/1B, St. Louis Cardinals (ESPN: 27.5 per cent; CBS: 20 per cent): Just over two years ago, we marveled at Carpenter’s in-season turnaround and power development. Well, he really slowed down at the end of 2018, batting just .170 in September, and last year, he lost a whopping 100 points of ISO as he was unable to come anywhere near duplicating his effort. This season, Carpenter’s offensive regression has continued, and — albeit, in a much smaller sample size — his extra-base pop has kept sliding. However, St. Louis has a ton of games left, and much of them are against pitching-weak teams, making him an intriguing late-season add. The well-respected veteran is dealing with the lowest BABIP of his career (.260 compared to a .313 lifetime mark), so perhaps a little correction is in order that will positively affect his BA down the stretch. Yes, Carpenter is currently slumping and may not play every day as a result, but given all the makeup games the Cards have left, he’s a sneaky play. BTW, in case you’ve ever wondered how he would look going down swinging as a Colorado Rockie, here you go…

Jared Walsh, 1B, Los Angeles Angels (ESPN: 32.6 per cent; CBS: 25 per cent): Every year, a certain amount of dudes come out of nowhere to have a major Fantasy impact. Walsh has been a bright light for the Halos, hitting extremely well and earning a place in redraft leagues as well as being a DFS force. He’s riding a nine-game hit streak, scoring and driving in at least one in every game over this stretch. After going 0-for-13 in July and August, he’s put up an OPS of 1405 in September, having already surpassed his 2019 hit total in much fewer at-bats. Another potential two-way player, Walsh is proving too valuable as a hitter to earn any time as a pitcher as he did last year. A stretch of six homers in seven games will do that!

Sean Murphy, C, Oakland Athletics (ESPN: 18.8 per cent; CBS: 50 per cent): Need some pop? No. 52 on our 2020 Top Prospects Rankings, Murphy has three dingers to go along with a lofty .350 BA over the last week. He’s seen an uptick in PT this season, and is positioning himself for a ton more in 2021 as the main man behind the plate in Oakland.

Dean Kremer, SP, Baltimore Orioles (ESPN: 29.7 per cent; CBS: 27 per cent): Brought up for his MLB debut less than two weeks ago, Kremer just keeps putting up solid starts (against some strong competition, too). How about a K/9 rate of 11.3? Grab this kid; he looks like he’ll be a solid middle of the rotation arm.

DJ Stewart, OF, Baltimore Orioles (ESPN: 28 per cent; CBS: 29 per cent): Stewart first caught our attention when he broke out at Double-A in 2017. Three years later, he’s mashing in the bigs with seven jacks and a BA of almost .300 this month. This is another great pickup for those seeking a power boost down the stretch.

Brusdar Graterol, RP/SP, Los Angeles Dodgers (ESPN: 3.3 per cent; CBS: 11 per cent): Our No. 67 prospect heading into the season, Graterol has seen his value as a dynasty asset slip with him looking like a reliever more than a starter now, but he’s getting a chance to act as an as opener with Walker Buehler out. Don’t expect wins or saves, but Graterol can help in other areas for NL-only league owners.

John Curtiss, RP/SP, Tampa Bay Rays (ESPN: 2 per cent; CBS: 2 per cent): Curtiss has really excelled as an opener/long reliever in his first season in Tampa Bay. His control is off the charts good, and he’s even vultured a few wins along the way, making him an asset in deep AL-only leagues.

Greg Holland, RP, Kansas City Royals (ESPN: 42.4 per cent; CBS: 48 per cent): With Trevor Rosenthal getting dealt to the Padres, Holland has earned another chance to close, and he’s run with the job. Holland is enjoying his lowest ERA since 2014, when he was a lights-out closer in his first tour with the Royals.

Jaime Barria, SP, Los Angeles Angels (ESPN: 8.7 per cent; CBS: 7 per cent): Barria turned in a solid rookie season in 2018 before the losses piled up last year. Well, he’s been better than ever this season since moving into the rotation at the end of August, going undefeated and not giving up more than three earned runs in any of his starts. Barria looks like more than simply a streaming option now.

Daniel Ponce de Leon, SP, St. Louis Cardinals (ESPN: 0.8 per cent; CBS: 4 per cent): Ponce de Leon has whiffed nine in back-to-back starts and with Dakota Hudson hurting, he’s likely to stick in the rotation the rest of the way.

We were lucky enough to see the late, great Peter Tosh at the Police Picnic in 1982. The Jamaican reggae legend was a key member of Bob Marley‘s backing band, The Wailers, before embarking on a successful solo career. Tosh’s 1976 debut solo album, Legalize It, included “What’cha Gonna Do?”

By RotoRob
This entry was posted on Saturday, September 19th, 2020 at 1:09 pm and is filed under BASEBALL, RotoRob, The Wire Troll. You can follow any responses to this entry through the RSS 2.0 feed. Both comments and pings are currently closed.