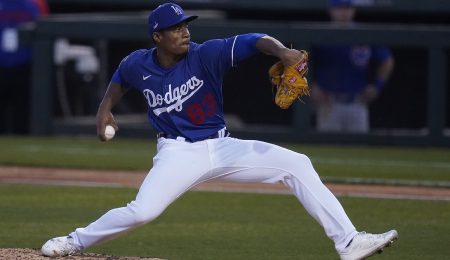 Josiah Gray has been set free from the Dodgers. (Ross D. Franklin/Associated Press)

Welcome back to another week of Fantasy baseball. We’ve reached the end of July and are now nearly two-thirds of the way through the season. Milk that waiver wire!

This week, Starlin Castro received a 30-game suspension for violating the league’s domestic violence policy; the Dodgers finalized a deal that nets them Max Scherzer and Trea Turner; and Washington’s sell-off continued as it peddled Kyle Schwarber to Boston.

Josiah Gray, SP/RP, Washington Nationals (ESPN: 13.9 per cent; CBS: 47 per cent): Gray, who ranked No. 85 on this year’s Top 100 Prospects list, has been shipped to Washington in the Scherzer-Turner trade. Escaping L.A. is a boon for young righty Gray, who looked much better in his second MLB outing (and first career start) last weekend. He’s going to need to improve his control, but as the former Dodgers’ top pitching prospect, he should get plenty of rope on the Nationals. Gray dealt with a shoulder injury earlier in the season, but definitely seems past that issue now, so consider him a nice upside asset for the second half. Check out the video below for a brief look at his stuff.

Rodolfo Castro, 2B, Pittsburgh Pirates (ESPN: 2.3 per cent; CBS: 4 per cent): Castro is another kid that benefits from the trade deadline as he’s taken over second base now that Adam Frazier has been dealt to the Padres. Castro has wasted no time making his mark, becoming the first major leaguer ever to have his first five career hits leave the yard, thereby buoying hopes for Pirate fans. On Friday, he got his sixth hit, but it was just a measly double (what a stiff, right?); still, the power potential this young switch-hitter has flashed has to garner some attention. Castro had actually spent more time at third base in the minors this season, but has plenty of experience at the keystone corner, so you have to figure at the very least he has the floor of a utility man. However, given the .300 stick he was wielding at Double-A before being recalled, the ceiling could be much higher.

Harrison Bader, OF, St. Louis Cardinals (ESPN: 47.5 per cent; CBS: 50 per cent): Bader has been red hot this month, and after taking a rare 0-for-4 on Thursday, he was right back at it on Friday with a single, run and ribbie, taking his season BA up to .294. A graduate of our 2018 Top Prospect Rankings, he showed promise with his hitting as a rookie before enduring a sophomore slump in 2019. Despite an injury which delayed the start of his season, Bader is hitting better than ever in 2021, reminding us that not long ago he was one of the team’s top prospects.

Rex Brothers, RP, Chicago Cubs (ESPN: 0.5 per cent; CBS: 1 per cent): It’s now been over six years since we considered Brothers a top 70 reliever who was still a closer in waiting. Well, with Andrew Chafin dealt to Oakland, and then Craig Kimbrel sent to the south side of Chicago, there’s a great opportunity for Brothers to take over as the ninth inning man for the Cubs. Brothers still brings 95 mph heat, and after a rough patch beginning a couple of weeks ago, he seemed to right the ship in his last outing with two perfect innings in which he had two Ks. Better still, after some injury issues, he seems back to the workhorse tendencies he showed early in his career and he’s really bounced back nicely after a nightmarish 2020 season. Back in May, Brothers bagged his first save in eight years; we think there’s a very good chance he gets plenty more before this season ends.

Kool and the Gang is from Jersey City, New Jersey of all places, so we don’t want to hear about how nothing good ever came from that state. In 1974, they released their fifth album, Light of Worlds, featuring the track “Rhyme Tyme People,” a tune sampled by Young Murder Squad in its 1996 tune, “Whatcha Wanna Do.”

By RotoRob
This entry was posted on Saturday, July 31st, 2021 at 12:11 pm and is filed under BASEBALL, RotoRob, The Wire Troll. You can follow any responses to this entry through the RSS 2.0 feed. Both comments and pings are currently closed.