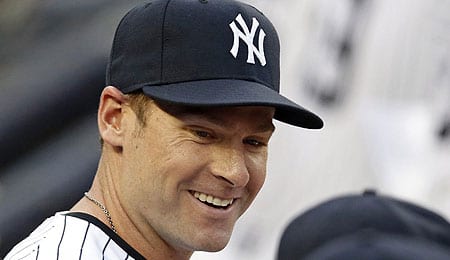 Welcome back to another week of Fantasy baseball. With July nearing an end, we are just around the corner from the dreaded dog days of August and — with them — the home stretch. Can you believe it? Tempus fugit, my peeps.

This week, Aaron Judge ended his dingerless drought in a big way; Yoenis Cespedes said he’d like to wrap up his career back in Oakland; and Kris Bryant dodged a serious injury after spraining his finger on Wednesday.

Chase Headley, 3B, New York Yankees (ESPN: 7.8 per cent; CBS: 16 per cent): With news that Greg Bird is likely out for the season, Headley has shifted over from third base to first base, and has probably guaranteed himself everyday playing time in the second half. Headley has responded with back-to-back multi-hit efforts and, after a solid June (.296 BA, .410 OBP), he’s remained hot this month, batting over .300. More power would be nice, but with his improvements in BA and OBP — and soon with multi-position eligibility — Headley has made himself a must-own AL-only league asset, and a possible target in mixed leagues (just keep him away from Craig Kimbrel — see video below). Do note that if the Yankees add a first baseman, Headley could lose PT, so monitor the situation going forward.

Danny Valencia, 1B, Seattle Mariners (ESPN: 18.9 per cent; CBS: 29 per cent): Notwithstanding a stinker Friday, Valencia has been getting it done lately, delivering three hits over the previous two days, and going yard on back-to-back days last weekend. He’s actually cooled off a bit this month after a very nice June, but given his gap power and decent BA, he seems a tad underowned, so if you need corner infield help in a mixed league, give him a look.

Zack Littell, SP, New York Yankees (ESPN: NA: CBS: unowned): Quietly, the Yankees have another pitching prospect on the way in Littell. After dominating at High-A, he was promoted to Double-A last month, and hasn’t skipped a beat, going 5-0 while posting the highest K/9 of his career (10.8). An 11th round pick in 2013 by Seattle, Littell is definitely exceeding expectations and it looks like the Yanks may have gotten a steal here after acquiring him for reliever James Pazos in the offseason.

Tyler Clippard, RP, Chicago White Sox (ESPN: 9.9 per cent; CBS: 17 per cent): With the Pale Hose dealing away David Robertson, Clippard — acquired from the Yanks in the trade — has taken over the closer job in Chicago. Clippard’s debut didn’t go well, but if you’re desperate for saves, you need to add him and see how this plays out because Anthony Swarzak still looms as a possibility to seize the job.

Daniel Robertson, 2B, Tampa Bay Rays (ESPN: 0.2 per cent; CBS: 2 per cent): Robertson (neck) is making progress, and should start a rehab assignment shortly. He’s no stud, but is one of those super-utility types that is valuable because he can cover your ass in the event of any of your infielders getting hurt. The rookie was getting a fair amount of action before he got hurt, and he even flashed some developing power. We like this kid’s potential as a sneaky useful asset in AL-only leagues.

Ryan Yarbrough, SP, Tampa Bay Rays (ESPN: NA; CBS: unowned): Just what the Rays need — another pitching prospect establishing himself as a major league option. Yarbrough has done just that lately, hurling six straight outings with two or fewer earned runs allowed at Triple-A. On Friday, he crafted an absolute gem of six goose egg innings with 13 Ks and no walks for his 10th win of the season to tie for the International League lead. Yarbrough has a frame built to log innings and he’s enjoyed a nice hit rate in his first season at Triple-A. Tuck this name away, keeper league owners.

Gerardo Parra, OF, Colorado Rockies (ESPN: 37 per cent; CBS: 37 per cent): Finally… a National League option. Parra has been on fire since the All-Star break with a ridiculous 1341 OPS and he’s even upped his modest walk rate this year. He’s slugging a whopping .540 on the season and is enjoying a career-best wRC+ of 120. If you need help in the outfield, add Parra while he’s available.

Ty Blach, SP/RP, San Francisco Giants (ESPN: 10.3 per cent; CBS: 26 per cent): Blach’s groundball rates aren’t as extreme this season, but his results lately have been excellent. Just be wary of that xFIP which suggests a slight regression may be coming in his ERA.

Byron Buxton, OF, Minnesota Twins (ESPN: 11.8 per cent; CBS: 33 per cent): Buxton’s counting cats have been a disappointment this season, but he’s expected to come off the DL on Tuesday after his groin injury. If he can stop popping it up so much, maybe he can finish strong just as he did last year. It’s worth taking the shot.

Jose Reyes, 3B/SS, New York Mets (ESPN: 29 per cent; CBS: 43 per cent): Reyes is on an absolute tear right now, and has been assured the Mets’ shortstop job going forward. Go old school and pluck him up like it’s 2011.

Adam Frazier, OF, Pittsburgh Pirates (ESPN: 5.3 per cent; CBS: 17 per cent): With Gregory Polanco (hamstring) landing on the DL, expect Frazier to play pretty much every day for the next week and a half or more. The Pirates 2013 sixth rounder can hit for average, putting together a .300 career BA in the minors and flirting with .280 in 140 career big league games.

By RotoRob
Tags: Chase Headley
This entry was posted on Sunday, July 23rd, 2017 at 11:18 am and is filed under BASEBALL, RotoRob, The Wire Troll. You can follow any responses to this entry through the RSS 2.0 feed. Both comments and pings are currently closed.