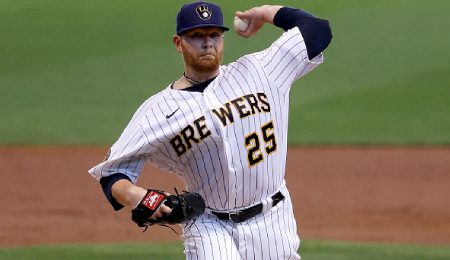 Brett Anderson is on a nice roll. (Last Word on Sports)

Welcome back to another week of Fantasy baseball. As August reaches its midway point, there’s less than 30 per cent of the schedule remaining, so you really need to mine the waiver wire.

This week, Trevor Bauer‘s leave has been extended again, this time to August 20; The Pale Hose earned a dramatic win in the Field of Dreams game; and the Cubs have said goodbye to struggling Jake Arrieta, who could be just about done like dinner.

A quick note to our readers that subscribe to the site through our RSS feed: We’ve been using Feedburner for years, but Google has decided to discontinue this product for these purposes, forcing us to shift to a different platform. Starting very soon, you will get an email through Mailchimp from us every Sunday morning to inform you of our latest posts. Please keep an eye out for this (and check your spam folder if need be). Thanks for your patience as we work through this technical detail.

Brett Anderson, SP, Milwaukee Brewers (ESPN: 24.2 per cent; CBS: 19 per cent): It’s been nearly three years since we last recommended Anderson, during his second tour of duty with Oakland. He enjoyed a career year in 2019, and — amazingly — has been relatively healthy since. Since the beginning of July, Anderson has been on a nice roll, giving up two or fewer runs in five straight starts, winning twice, and lowering his ERA by over a run to 3.54. He still has a losing record, but he hasn’t been getting hit hard lately and continues to generate plenty of groundballs with his sinker (see video below). You could do much worse than Anderson as a back of your rotation option.

Victor Reyes, OF, Detroit Tigers (ESPN: 6.9 per cent; CBS: 2 per cent): Reyes is someone we suggested as a possible option for Joc Pederson owners in September, and it was a decent pick as he did a pretty good job of getting on base down the stretch last year. However, despite better extra-base sock, Reyes has mostly struggled this year and lost PT as a result. But with both Akil Baddoo and Derek Hill out after a nasty collision earlier this week, Reyes has found himself back in the lineup, delivering back-to-back multi-hit games and going yard on Thursday. Beware that Reyes also showed life early last month before disappearing, but the fact he’s likely going to stick in the lineup for a little while makes him an attractive AL-only option.

Vladimir Gutierrez, SP, Cincinnati Reds (ESPN: 32.4 per cent; CBS: 42 per cent): When Gutierrez earned his first MLB win in early June, it seemed unclear if he was going to stick in the rotation given the options the Reds had. But after throwing his fourth straight quality start on Thursday, it’s now obvious his job is secure. Gutierrez has been dynamite so far in August (1.42 ERA) to lower his season mark to a much more palatable 3.95. Grab him in all formats for the stretch run, especially with a two-start week on tap.

Trevor Williams, SP, New York Mets (ESPN: 4.8 per cent; CBS: 8 per cent): Three years ago, Williams was one of the top waiver wire hurlers of the season, but things went downhill for him in 2019, and were even worse last year. This season, he recovered slightly with the Cubs and was deemed useful enough for the Mets to acquire him, and he was solid in his New York debut on Thursday. While Williams has done a good job this season limiting barrels, when he does give up contact it’s generally been hard, with the highest average exit velocity of his career. Still, with news that Jacob deGrom will be out even longer, Williams — despite being sent back to Triple-A — should be in line for more starts down the stretch.

Yan Gomes, C, Oakland Athletics (ESPN: 12.5 per cent; CBS: 33 per cent): Back in 2017, Gomes earned consideration for our Wire Troll All-Star Team, and while he was even better in 2018, he slipped in 2019. However, he bounced back nicely last year and was putting up some sweet counting cat totals in Washington before landing in Oakland, where he’s excelled in a timeshare with Sean Murphy. Gomes has hit safely in each of his last three games, with a double, a homer, four runs and four ribbies, and he’s now seen almost as much action in August as he did in the entire month of July. He’s enjoying a career-best xwOBA of .351, so he’s actually been even better than his numbers suggest (.333 wOBA).

New York singing group Odyssey has been at it since 1977. In 1981, the band released I Got the Melody (Expanded Version), which includes the classic “Going Back to My Roots,” originally recorded in 1977 by Lamont Dozier, who was instrumental in creating much of the Motown sound.

By RotoRob
This entry was posted on Saturday, August 14th, 2021 at 11:38 am and is filed under BASEBALL, RotoRob, The Wire Troll. You can follow any responses to this entry through the RSS 2.0 feed. Both comments and pings are currently closed.