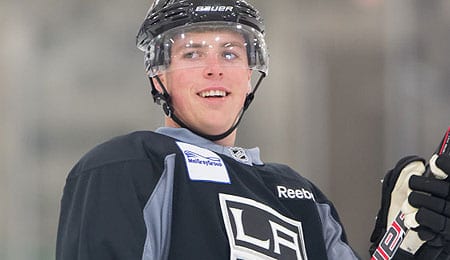 Tanner Pearson is as hot as anyone over the last couple of weeks. (Kingsfandaily.com)

As far as NHL trade deadlines go, last Monday’s was a dud. With many teams in or close to playoff contention, there were lots of buyers and very few sellers. Big names that were reportedly on the move (Jonathan Drouin, Loui Eriksson and Radim Vrbata among others) went nowhere, and organizations are going to have some difficult decisions to make if they choose not to re-sign players they could have swapped for picks and prospects at the deadline. That’s the risk you take when you decide to play hard ball, or puck, in this case.

Let’s get to this week’s picks. Some of them may surprise you.

Tanner Pearson, LW, Los Angeles Kings (ESPN: 3.7 per cent; CBS: 20 per cent): Only three players have more goals over the past 15 days than Pearson, and they’ve done it in one more game. In his last six games, the Kings’ 2012 first rounder has five goals, six points, a plus-5 rating, 12 shots on goal, nine hits and two blocked shots. Pearson is currently riding a three-game goal streak, and is scoring on more shots than he is missing.

Everyone goes on a hot streak at one point or another, so be careful. However, he has proven himself to be a fairly consistent Fantasy player with 12 goals, 28 points, a plus-11 rating and 109 shots on goal in 61 games played. He’s a depth player, on both the Kings roster and yours, but that doesn’t mean he can’t or doesn’t play a vital role. If Pearson can keep up his current pace, you’ll do well to make sure he’s contributing to your team and not your buddy’s. It’s now been nearly two and a half years since Pearson potted his first NHL goal (see video below), and he now finds himself just three shy of reaching 30 for his career.

Jamie McGinn, LW, Anaheim Ducks (ESPN: 1.7 per cent; CBS: 10 per cent): Pearson isn’t the only winger thriving in sunny SoCal – Anaheim’s newest celebrity citizen, McGinn, has also been solid. In his last seven games between cold Buffalo and Disneyland utopia (we seriously love Anaheim), McGinn has four goals, five points, a plus-3 rating, two penalty minutes, a power play goal, 15 shots on goal, nine hits and seven blocks. He has 16 goals, 30 points, a minus-8 rating and 115 shots through 65 games played this season. Look for McGinn’s numbers to improve significantly with the move to the surging Ducks.

Nino Niederreiter, RW, Minnesota Wild (ESPN: 11.6 per cent; CBS: 27 per cent): There may be no hotter line in the NHL right now than Minnesota’s “third” line of Niederreiter, Erik Haula and Jason Pominville. More likely than naught, all three are available on your league’s waiver wire. In his last seven games, Niederreiter has four goals, six points, a plus-4 rating, six penalty minutes, 17 shots on goal, 10 hits and three blocks. The former fifth overall pick has 14 goals, 33 points, a plus-8 rating, 26 penalty minutes and 126 shots on goal in 65 games this season.

Dennis Seidenberg, D, Boston Bruins (ESPN: 0.6 per cent; CBS: 4 per cent): Looking for some defensive depth? Seidenberg is just the man. He doesn’t contribute much in the way of goals and points, but he’ll be a big factor in blocked shots and other miscellaneous categories. A member of the 2011 Stanley Cup champs, he has a goal, 11 points, a plus-6 rating, 22 penalty minutes and 57 shots while averaging 19:44 of ice time through 49 games played.

Dmitry Kulikov, D, Florida Panthers (ESPN: 8.7 per cent; CBS: 8 per cent): A (slightly) more offensive version of Seidenberg, Kulikov has made waves recently with five assists, eight penalty minutes, seven shots on goal, 11 hits and 15 blocks over his last six games. Averaging 21:05 on the ice, Kulikov has a goal, 13 points, a plus-8 rating, 41 penalty minutes and 77 shots on goal through 56 games. Hey, we did say he was slightly better offensively.

Fantasy Tip of the Week: A few of the league’s “cellar dwellers” have written off the season and given over the reins to the youngsters. Not only are they proving themselves to organizational brass, but to you as Fantasy GM, as well. Keep your eyes peeled for kids like William Nylander, Kasperi Kapanen, Sam Bennett, Sam Reinhart and others — they just might lead your team to a league championship in future seasons.

By Dakota Case
Tags: Los Angeles Kings, Tanner Pearson
This entry was posted on Sunday, March 6th, 2016 at 12:27 pm and is filed under Dakota Case, HOCKEY, The Wire Troll. You can follow any responses to this entry through the RSS 2.0 feed. Both comments and pings are currently closed.