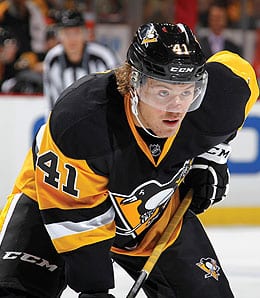 Welcome back to another week of Fantasy hockey. We’re into 2018 now, and in the early phases of the league’s second half, so keep your foot on the gas and continue working that wire to find difference makers for your championship push.

This week, Dallas billionaire Tom Dundon became the majority owner of the Carolina Hurricanes, alleviating concerns the team would be on the move; the struggling Sabres suffered another big blow with the loss of defenseman Zach Bogosian (leg) for the next 4-to-6 weeks; and the U.S. Army has declared war on the Golden Knights’ name and colour scheme.

Daniel Sprong, RW, Pittsburgh Penguins (ESPN: 12.7 per cent; CBS: 37 per cent): Spong now finds himself playing with Sidney Crosby, reason enough for you to consider him. Sprong showed what he’s capable of last Friday, ripping two goals (including the game-winner) on six shots with an assist. While those are his only points through five games, he’s seeing much more ice time than he got last season, and his PT seems to have settled into a decent groove after looking inconsistent for his first few games. This Netherlands-born winger was brought up from the AHL to help kickstart Pittsburgh’s offense (which seems strange). Sprong has the offensive chops to be a top six forward, so he’s definitely worth considering if you are trying to find a second half spark. Hell, he’s already learned how to use Sid as a decoy to get his shot off (see video below).

Nikolay Goldobin, RW, Vancouver Canucks (ESPN: 0.3 per cent; CBS: 4 per cent): Goldobin hasn’t exactly been producing lately, but has seen a big uptick in ice time in recent games and is now playing with the Sedin twins. Sounds like a recipe for success to us. Just 22, Goldobin was the Sharks’ first rounder in 2014 and it looks like he’s finally ready for prime time as he’s started to get more shots on goal. The production will follow. Despite mixed reviews, we think this kid could be something.

Phillipp Grubauer, G, Washington Capitals (ESPN: 14.6 per cent; CBS: 17 per cent): Grubauer isn’t seeing much action, but sure has looked sharp recently when he does play, giving up a total of four goals over his last three starts. To start the streak, he stopped all 37 shots in regulation and overtime as the Caps lost 1-0 in a shootout to the Rangers. Grubauer in on pace to easily break his career high in games played, making him an interesting backup goalie to own. On Friday, he stopped 36 shots to help spark the Caps to a come from behind win in Carolina, and although he isn’t a huge goalie by today’s standards (6’1″, 182), he’s very athletic.

Trevor van Riemsdyk, D, Carolina Hurricanes (ESPN: 1 per cent; CBS: 3 per cent): van Riemsdyk has seen a major boost in PT since Brett Pesce (upper body) got hurt. And while van Riemsdyk’s production hasn’t exactly spiked, he does have eight blocked shots over the last two games, so looks like he’ll provide a boost in that category. All those blocks increase the chances of getting hurt, and sure enough, this stay-at-home defender had to leave Friday’s game briefly, but it’s worth the risk if you need help in this regard.

Linus Ullmark, G, Buffalo Sabres (ESPN: 3.5 per cent; CBS: 4 per cent): The Swedish netminder made his season debut on Thursday in spectacular fashion, stopping a career-high 44 of 45 Blue Jacket shots to backstop the Sabres to victory. Ullmark has been one of the top goalies in the AHL this season, and if the team opts to bring him back after its bye week, he could be in line to get more action — certainly more than last season. Keep your eyes on this kid in very deep formats.

By RotoRob
Tags: Dallas, Daniel Sprong, Fantasy Hockey, Pittsburgh Penguins
This entry was posted on Saturday, January 13th, 2018 at 3:20 pm and is filed under HOCKEY, RotoRob, The Wire Troll. You can follow any responses to this entry through the RSS 2.0 feed. Both comments and pings are currently closed.