The Wire Troll: Jack Studnicka Gets His Shot 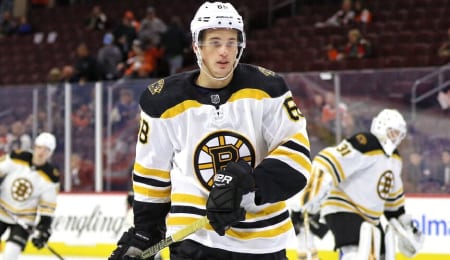 Jack Studnicka will get a lot of responsibility in his first NHL trial. (Amy Irvin/The Hockey Writers)

Welcome back to another week of Fantasy hockey. November is just about in the books; how are you teams doing so far? Use the wire to get help where you need it!

This week, Duncan Keith was knocked out early on Friday with a groin injury, and it’s unclear how much time he’ll miss; Brad Marchand wasn’t impressed it took the concussion spotter so much time to determine Marchand needed checking out on Friday; and Bill Peters resigned as coach of the Flames after it was revealed that he made racial comments to a player a decade ago.

Jack Studnicka, C, Boston Bruins (ESPN: unowned; CBS: 3 per cent): With Patrice Bergeron out, Studnicka has been summoned from the AHL to slide into the 2C role in Boston. Studnicka has already shown off his explosive speed (see video below), and managed to log an assist in his debut, going +1 in both games so far. Note that his prospect status was slipping a bit heading into the season, but he’d been playing so well in his first full AHL season, potting nine goals with nine assists through 21 games. Studnicka doesn’t have a ton of offensive upside, but in time he should settle in as a very dependable two-way forward.

Jesse Puljujarvi, RW, Edmonton Oilers (ESPN: 1.2 per cent; 8 per cent): Things haven’t worked out so well for Puljujarvi at the NHL level. The fourth overall pick from 2016 has really struggled to carve out a significant role for himself with the Oilers, and to make matters worse, last season he went down early with a hip injury. Puljujarvi was disillusioned enough to head to Finland to play this season, and if he’s going to play in the NHL this season, the deadline to re-sign or trade him is coming very soon (December 1). Even though they’ve said the door is open for him to return, it’s doubtful the Oilers will be able to get him back in the fold, which means his rights could be traded this weekend. Puljujarvi is playing extremely well in the Finnish league, so if he decides to return, he could provide a nice boost, but at this point he’s just a stash candidate while we see how this plays out. Keep in mind that this kid is still just 21.

Brett Connolly, RW, Florida Panthers (ESPN: 16.9 per cent; CBS: 36 per cent): Connolly enjoyed a breakout effort with the Caps last season, but after signing with the Panthers this season, he’s taking it to the next level. He has five goals and an assist over the last five games, giving him 19 points through 25 games, putting him on pace to flirt with 40 goals this season. Not many expected this dude to be leading the Cats in goals nearly a third of the way through the season, but here we are, so grab Connolly while you can.

American Rudy Ray Moore did a bit of everything, but was perhaps most famous for creating the Blaxploitation movie character Dolemite and doing many a film score over the years. From the soundtrack to the 1975 movie Dolemite, this is “Mayor’s Get-Away,” which he recorded with his band, the Soul Rebellion Orchestra.

By RotoRob
Tags: Jack Studnicka
This entry was posted on Saturday, November 30th, 2019 at 2:06 pm and is filed under HOCKEY, RotoRob, The Wire Troll. You can follow any responses to this entry through the RSS 2.0 feed. Both comments and pings are currently closed.