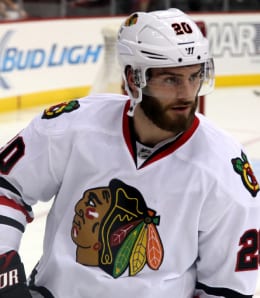 Brandon Saad is lighting it up lately. (Wikipedia)

Welcome back to another week of Fantasy hockey. We’re nearing the end of February now, so are clearly in the home stretch. Don’t ease up now, peeps!

This week, Alex Ovechkin snapped a drought with career goal No. 699; the Capitals have dropped out of the Metro division lead, prompting a deal for defenseman Brenden Dillon; and Vegas also made a move to shore up its blueline, acquiring Alec Martinez from the Kings for draft picks.

Brandon Saad, LW, Chicago Blackhawks (ESPN: 26.4 per cent; CBS: 25 per cent): After spending a couple of seasons in Columbus where he put up some solid numbers playing with Alexander Wennberg and Scott Hartnell, Saad returned to Chicago in 2017-18 and his results have been mixed. In his first season back, Saad only managed 35 points, but he had better numbers last season. This season has been a mixed bag; he’s scoring more goals but hasn’t been getting nearly as many helpers, hurting his point total. Still, since returning from an ankle woe, Saad has been lighting it up with seven goals in the last 11 games (see video below for one of them, commented on in a rather bizarre fashion). He’s playing with Patrick Kane, and that’s always good news for a player’s production. Keep in mind that Saad is a trade candidate with the struggling Hawks falling well out of the Wild Card race recently. Still, given his two-way skill and hockey IQ, he’ll be an asset wherever he’s playing.

Josh Manson, D, Anaheim Ducks (ESPN: 1.1 per cent; CBS: 6 per cent): Manson is another player that could be moved by Monday’s trade deadline. Right now, he’s seeing extra minutes with Cam Fowler out day to day, and while Manson doesn’t offer much offensively, he does have a 51.01 CF percentage with 91 hits and 46 blocks. With his increased PT over the last couple of games, Manson has also put up three shots, and given that he’s often received top-pairing minutes, he’s a deep league asset at the very least.

Noel Acciari, RW, Florida Panthers (ESPN: 14.4 per cent; CBS: 16 per cent): We’ve already pimped Acciari this season, but he deserves a second look given what a good campaign he’s having. He picked up an assist on Thursday, was +1 for a third straight game and, with 10 shots over the last four, he’s been generating offense. Acciari ripped back-to-back hat tricks earlier this season, so he’s a dude capable of scoring in bunches. You’ll definitely want him on your team the next time he’s goes on a tear.

Joonas Donskoi, RW, Colorado Avalanche (ESPN: 21.5 per cent; CBS: 36 per cent): With Mikko Rantanen out for the next few weeks, Donskoi will move onto the second line and receive more responsibility. On Wednesday, Donskoi snapped a slump with his 15th goal of the season, so let’s hope this helps get him back on track. He began the season on fire, with 11 goals and 11 assists over the first 26 games, before slowing. At this stage, Donskoi is a solid fourth winger in a 10-team league, with some nice possible upside over the next few weeks.

One of my personal faves, the late great Lou Reed was an American singer who performed from 1958 until his death in 2013. In 1973, he released his third album, the classic Berlin, and from this effort the lead single was “How Do You Think it Feels.”

By RotoRob
Tags: Brandon Saad
This entry was posted on Saturday, February 22nd, 2020 at 1:35 pm and is filed under HOCKEY, RotoRob, The Wire Troll. You can follow any responses to this entry through the RSS 2.0 feed. Both comments and pings are currently closed.