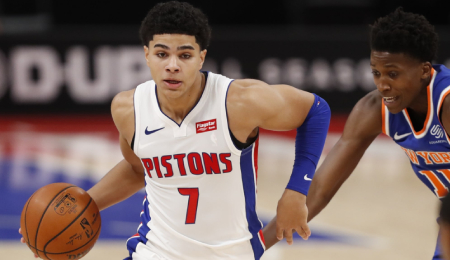 Welcome back to another week of Fantasy basketball. January is nearly done, meaning we’re closing in on the season’s three-fifths mark, so you better scour that wire.

This week, the Nets suggested that they won’t entertain trade offers for James Harden; Kelly Oubre‘s career game spurred the Hornets to an NBA season-high 158-point explosion on Wednesday; and Terence Davis (wrist) is out indefinitely for the struggling Kings.

Killian Hayes, PG, Detroit Pistons (ESPN: 32.1 per cent; CBS: 17 per cent): We recommended Hayes at the very beginning of the season, and he’s shown some improvements until recently. But we still see him as a useful asset if you need help with assists as he’s recorded at least five dimes in every game this month (except January 18, when he was limited to nine minutes with a hip woe). Killian has seen more action this season, but his touches are down and he’s now coming off the bench (as the sixth man). Still, he paced the Pistons with eight dimes on Wednesday and six on Friday, and he intrigues us with his size as a PG even if he’s not the most athletic player (although every now and then he shows off his dunking skills — see video below).

Cody Martin, SF, Charlotte Hornets (ESPN: 5.1 per cent; CBS: 19 per cent): We recommended Martin a few weeks ago, and he vindicated us briefly by shooting amazingly from downtown last month, however, his shooting has crashed this month. Still, he’s been seeing nice PT starting for Gordon Hayward (foot) and got even more on Friday with Oubre Jr. (ankle) out. Martin is sinking more buckets after a disappointing sophomore effort, so consider him an intriguing DFS play for now.

Davion Mitchell, PG, Sacramento Kings (ESPN: 3.7 per cent; CBS: 31 per cent): With both De’Aaron Fox and Davis out, Mitchell has been getting a chance to start, and the rookie has impressed, scoring 20 points with six dimes on Wednesday. Taken ninth overall last year out of Baylor, Mitchell has been inconsistent and has really struggled from the line this month, but his future looks bright — especially given rumours that Fox could be traded.

Furkan Korkmaz, SG, Philadelphia 76ers (ESPN: 3 per cent; CBS: 10 per cent): It’s been nearly two years since we last pimped Korkmaz, and that pick was a nice short-term option as he got tons of touches at the time and shot well down the stretch. Unfortunately, he dealt with a groin woe last season, but this season his FT shooting has never looked better and he’s enjoyed some solid offensive efforts despite his ongoing defensive issues. Korkmaz is fitting in well with the Sixers’ system, making him a decent add in deep leagues.

Bismack Biyombo, C, Phoenix Suns (ESPN: 13.5 per cent; CBS: 23 per cent): Just over a year ago we recommended Biyombo, and it worked out decently as he played a lot in January, shot very well in February and then saw an uptick of PT in March before fading down the stretch. Now, he’s turned a 10-day deal into a contract for the rest of the season and it’s paying off as on Friday he recorded his third double-double in four games. Biyombo is an elite defender, but has always struggled in the post.

Torrey Craig, SF/PF, Indiana Pacers (ESPN: 1.5 per cent; CBS: 6 per cent): Journeyman Craig has never been much of a Fantasy factor, although he did occupy a very useful role for the Suns down the stretch and in the playoffs last season. Now, with Myles Turner out, Craig is getting much more burn in the last week, responding with at least a dozen points in three of the last four games before Friday (when Domantas Sabonis returned). Craig is sinking way more buckets this month, and if his three-point accuracy returns to last season’s level, he’ll be a decent asset in deep leagues going forward.

Donte DiVincenzo, SG/PG, Milwaukee Bucks (ESPN: 35.7 per cent; CBS: 14 per cent): DiVincenzo missed some time early this month with an ankle injury, but he’s rolling now (20 points last Saturday) and was seeing more action while Grayson Allen (hip/suspension) was out. If Divencenzo is moved at the deadline, it could be a boon for his Fantasy value.

Hamidou Diallo, SG, Detroit Pistons (ESPN: 6.6 per cent; CBS: 46 per cent): For most of his career, Diallo has been a bench player, but he’s spent more time starting this season. His bucket count is up, but we’d like to see him take more three-pointers. Deep league special here only, folks.

Matisse Thybulle, SF/SG, Philadelphia 76ers (ESPN: 7.8 per cent; CBS: 18 per cent): Thybulle was dealing with a shoulder sprain earlier this week, but that hasn’t stopped him from nabbing 11 steals over the last three games. Need help in this category? Grab this thieving Aussie.

Dalano Banton, PG, Toronto Raptors (ESPN: 0.1 per cent; CBS: 1 per cent): Banton is forcing his way into the Raptor rotation and he could be a great DFS play with Fred VanVleet (knee) questionable for Saturday.

Nicolas Batum, SF/SG, Los Angeles Clippers (ESPN: 8.6 per cent; CBS: 39 per cent): Batum got off to a big start, then got hurt. But he’s in the starting lineup again now, and even if his production has been inconsistent, he remains a top 100 player with both Kawhi Leonard and Paul George sidelined.

Canadian-American rockers The Band‘s farewell concert on U.S. Thanksgiving in 1976 (The Last Waltz) included a performance of the Junior Parker song “Mystery Train” by Paul Butterfield.

By RotoRob
This entry was posted on Saturday, January 29th, 2022 at 12:19 pm and is filed under BASKETBALL, RotoRob, The Wire Troll. You can follow any responses to this entry through the RSS 2.0 feed. Both comments and pings are currently closed.