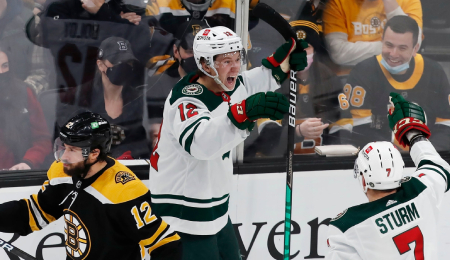 Welcome back to another week of Fantasy hockey. The All-Star break is upon us, making it a perfect time to raid the waiver wire while your league mates are distracted by skills competitions.

This week, Alex Ovechkin got the ‘vid, and will miss the All-Star Game as a result; Philipp Grubauer made 19 saves to backstop Seattle to its first ever shutout; and Semyon Varlamov‘s struggles continued as the Isles have been unable to get back into the playoff race.

Matt Boldy, LW, Minnesota Wild (ESPN: 12 per cent; CBS: 39 per cent): Boldy is making quite an impact since his debut less than a month ago, averaging a point per game through his first 10 NHL tilts. Only three times has this kid been held off the scoresheet so far, and he’s even holding his own in the few faceoffs he’s been tasked with. Boldy is a fantastic dynasty asset, but needs to be owned in all formats as he’s clearly in the NHL to stay and should be a force in the second half. This kid can do it all — score goals, be a playmaker and defend. The Boston native clearly has a flair for the dramatic, scoring the game-winning goal in his first NHL game — in his hometown (see video below).

Jordan Greenway, LW, Minnesota Wild (ESPN: 3.4 per cent; CBS: 11 per cent): What’s this? Another Minnesota left winger? In mid-December, we noted how Greenway’s contributions were helping fuel Minnesota’s strong play. Well, he failed to garner an assist that month, and hasn’t bulged the twine since, but has been racking up helpers from January on. And now that Greenway’s been rewarded with a new three-year contract extension, it’s clear he’s a big part of the Wild’s future plans (thereby clearing up any trade rumours). No, he’s been unable to build on last season’s breakout, but we expect improvements from him while playing on a line with Joel Eriksson Ek and Marcus Foligno. Greenway is a massive kid, and when he uses his advantage in reach, look out. Add him in deep formats.

Brad Lambert, C/RW, Lahti Pelicans (Liiga) (ESPN: NA; CBS: NA): On the off chance that you find yourself buried in your dynasty league standings this season, it may be time to look towards 2022-23. With this in mind, we draw your attention to Lambert, a Finnish prospect who’s expected to be one of the top picks in this year’s NHL Draft. He’s off to a slow start with his new team, and while some believe he’s no longer a lock for the top five, it would be a shock if he’s not a top 10 pick. Lambert’s skill and speed will make him a real offensive force in time.

Joe Snively, LW, Washington Capitals (ESPN: unowned; CBS: unowned): Snively has parlayed a big January in the AHL into another recall to the NHL, and suddenly finds himself playing on the top line with Ovechkin sidelined because of COVID. Sure, in all likelihood, OV will be fine when the Caps return to action after the All-Star break, but Snively has looked good in his limited PT. Snively is barely a deep league option at this point, but is a name to tuck away for the second half.

Kale Clague, D, Montreal Canadiens (ESPN: 0.1 per cent; CBS: 3 per cent): Since being claimed off waivers from the Kings, Clauge has seen more action, and he should continue to get regular PT with David Savard (ankle) out until late-March. Clague missed some time on Covid protocol a few weeks ago, but just before that, he scored his first career goal. Other than that, he hasn’t provided any offense for the Habs, but he did manage five assists in just 11 games for L.A. before getting waived. If you need help on defense in a very deep format, Clague is worth considering.

James Newell Osterberg Jr., better known as Iggy Pop, has been performing since 1960. In 1977, he released his second solo album, Lust for Life, and the first single from this effort was “Success,” one of the disc’s more upbeat tracks.

By RotoRob
This entry was posted on Saturday, February 5th, 2022 at 11:52 am and is filed under HOCKEY, RotoRob, The Wire Troll. You can follow any responses to this entry through the RSS 2.0 feed. Both comments and pings are currently closed.