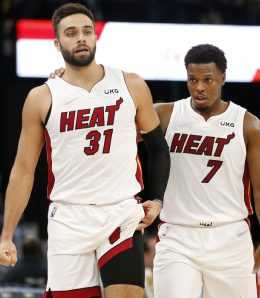 Welcome back to another week of Fantasy basketball. We’re just a week away from Christmas now, putting us nearly two-fifths of the way through the season. Let’s see if we can find you some awesome gifts on the waiver wire, shall we?

This week, Covid continues to ravage through the NBA, with Jordan Poole, Al Horford, Grant Williams and tons of others entering the health and safety protocols; Brooklyn Coach Steve Nash says that Kevin Durant‘s 36.9 MPG (fourth highest in the NBA) is unsustainable and not safe; and the Bulls got clearance to return to practice following their Covid-19 shutdown.

Max Strus, SG, Miami Heat (ESPN: 0.2 per cent; CBS: 2 per cent): Strus has been asked to guard to some key opponents recently, and he’s shown flashes of Fantasy value, but he really got a chance to step up with Tyler Herro (quad) out on Friday. Strus exploded for 32 points on eight treys (see video below for his trey and one), with seven boards and an assist, proving instrumental in the Heat’s win over the Magic. He’s played at least 21 minutes in three of the last four games, snapped a shooting drought (11-for-15) and finally jacked up more three-point attempts than he has recently. Strus has improved his rebounding work this season and since returning from a knee injury in mid-November, has managed to score in double-digits eight times. The DePaul product came out of college known for his athleticism and shooting, especially from downtown, but there were concerns about his ability to get to the hoop. Strus could be a nice DFS play if Herro remains out.

Chuma Okeke, PF, Orlando Magic (ESPN: 1.3 per cent; CBS: 12 per cent): Okeke had already seen a big uptick in minutes this week, but that went through the roof on Friday with Terrence Ross and Mo Bamba added to protocol. Okeke hadn’t done much lately to warrant Fantasy attention, but after he went off for 18 points, 10 boards, six steals, four treys, four assists and a block, he looks very intriguing, especially since his rebounding work has been better this season. With the frontcourt decimated, the PT is there for him.

Gary Harris, SG, Orlando Magic (ESPN: 1.4 per cent; CBS: 10 per cent): We last pimped Harris in mid-March last year when his scoring picked up for Denver. Unfortunately, just as he was heating up, the season was paused because of the pandemic. Last season, Harris’ three-point shooting continued to regress for the Nuggets before he was dealt to the Magic and saw less PT. This season, his offensive game has slipped, but things are picking up, and he exploded for 20 points with five assists, three treys, two steals and a block on Friday with Cole Anthony (ankle) and R.J. Hampton (Covid) out.

Kessler Edwards, SF, Brooklyn Nets (ESPN: 2.3 per cent; CBS: 4 per cent): With DeAndre’ Bembry and Bruce Brown being added to the Covid list, the Nets are now missing seven players in protocol. This has created an opportunity for rookie Edwards, and he stepped up with a double-double on Tuesday and a near miss of a second one on Thursday. He’s impressed in his first taste of big minutes and shown the kind of hustle that could earn him rotation time down the road.

Cody Martin, SF, Charlotte Hornets (ESPN: 16.4 per cent; CBS: 50 per cent): With LaMelo Ball out, Martin has been starting lately but even in his return to the bench Friday he still put up 14 points and five assists, going 5-for-5 from the field. Martin’s PT is way up this month, and while he’s going to be less reliable off the bench, he’s massively outplayed his preseason ranking so far.

Dewayne Dedmon, C, Miami Heat (ESPN: 6.2 per cent; CBS: 38 per cent): Three seasons ago, Dedmon was a Wire Troll All-Star, but the following season after just 10 more games in Atlanta, he was traded to Sacramento, where he mostly came off the bench. Last season, he was exclusively a bench player in Miami, but he’s back to being a Fantasy option now as he’s played at least 23 minutes in four straight, putting up two double-doubles over that stretch. Former USC star Dedmon is worth grabbing while both Bam Adebayo and Jimmy Butler are out.

Larry Nance Jr., PF, Portland Trail Blazers (ESPN: 5.4 per cent; CBS: 41 per cent): Man, it’s been a while since Nance landed on our Fantasy radar, but he was recently moved into the starting lineup, so he’s been flirting with double-doubles while racking up some steals. Perhaps the veteran is setting himself up as a trade chip later this season.

Cameron Johnson, SF, Phoenix Suns (ESPN: 8.8 per cent; CBS: 39 per cent): When we recommended Johnson last season, it took a while for him to pay us back. But he’s now scored a dozen or more points in eight straight games and his FT shooting has gotten better as the season has progressed.

P.J. Tucker, SF/PF, Miami Heat (ESPN: 7.5 per cent; CBS: 25 per cent): Tucker, brought to Milwaukee last season to help spur a championship run, is now with Miami and is another player benefiting from all their injuries. He went off for a season-high 23 points on Monday, and has scored 12 or more in both games since. Tucker has been instrumental in keeping Miami going during its health woes.

Before they were Babe Ruth, they were Shacklock, and other than guitarist Alan Shacklock, original members included Janita Haan (who has one hell of a voice) and Dave Hewitt. In 1976, the band released Kid’s Stuff, which nearly reached the top 50 in Canada. The album included the great song “Oh! Doctor.”

By RotoRob
This entry was posted on Saturday, December 18th, 2021 at 11:44 am and is filed under BASKETBALL, RotoRob, The Wire Troll. You can follow any responses to this entry through the RSS 2.0 feed. Both comments and pings are currently closed.