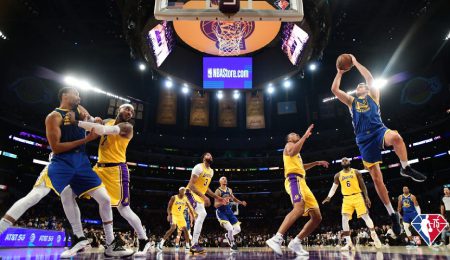 Nemanja Bjelica (right) has been a great addition for the Warriors. (Archysport)

The 2021-22 NBA season tipped off this week which means we’re here to welcome you back for another season of Fantasy basketball waiver wire recommendations. As always, our picks consist solely of players available in 50 per cent or more of ESPN and CBS leagues. Best of luck this season!

This week, Stephen Curry continued to blow everyone away with his shooting; Ben Simmons‘ situation remains murky as the team seeks some sort of resolution; and Lakers’ coach Frank Vogel took responsibility for Russell Westbrook‘s awful debut with the team.

Nemanja Bjelica, PF, Golden State Warriors (ESPN: 4.5 per cent; CBS: 32 per cent): At the beginning of February, we were puzzled by whether Bjelica was worth adding given his inconsistency. Sure enough, he wound up enjoying his best month in February before his bucket count dipped in March and his shooting accuracy kept tanking in April. Well, Bjelica is now with the Warriors, allowing the team to space their offense out more, and he was really impressive in the opener in recording a double-double before seeing less action on Thursday (but still flirting with another double-double). This is a dude that the Warriors have apparently wanted for a while now. He brings toughness on D (see video below), and can clearly score and be an asset on the boards when given enough minutes, so really it’s all about his opportunity, so watch that closely before deciding whether to add him. For now, Bjelica is an intriguing option in deeper formats. He plays a smooth game and is capable of having the offense run through him, so give him a look if you need a playmaking big.

George Hill, PG/SG, Milwaukee Bucks (ESPN: 0.9 per cent; CBS: 2 per cent): Hill dealt with some injury issues last season, dampening what was looking like a solid comeback season for the veteran combo guard. Well, he’s back in Milwaukee this season and could provide some early season value in deeper formats with Jrue Holiday (heel, thigh) a bit beat up right now. The Bucks play four games next week, so consider Hill as a viable short-term add — especially while he’s starting for Holiday (although note that Holiday is listed as probable for Saturday).

Killian Hayes, PG, Detroit Pistons (ESPN: 42.9 per cent; CBS: 41 per cent): Hayes is another player that dealt with health issues last season, and it really hurt his chance of making a bigger impact as a rookie. With Cade Cunningham (ankle) out for at least another week, Hayes got the start in the opener. No, Hayes didn’t exactly take the opportunity and run with it (0 points and just two assists, but five boards), but he did show great promise as a playmaker last season, so let’s see how things play out early on before writing him off.

Trey Murphy III, SG, New Orleans Pelicans (ESPN: 1.2 per cent; CBS: 19 per cent): Murphy didn’t get a ton of action in his first NBA game, but with Josh Hart (quad) out on Friday, he acted as the sixth man on Friday. Taken 17th overall by Memphis and then flipped to New Orleans, Murphy is the only player in Virginia’s history to put up a 50/40/90 season, so he’s definitely someone to track as the campaign progresses, even if the early results aren’t awe inspiring.

Patty Mills, PG, Brooklyn Nets (ESPN: 34.2 per cent; CBS: 45 per cent): Throughout his career, Mills has always been a time-share kind of player, but with Kyrie Irving still refusing to get vaccinated, Mills is in line for significant minutes for the foreseeable future. In 29 minutes in the opener, all Mills did was can all seven of his three-point attempts for 21 points with a couple of boards, a couple of dimes and a steal. On Friday, he played 30, again was perfect from beyond the arc. Grab Mills while you can because we expect him to be scooped off the wire very quickly.

Babe Ruth (the band, not the Yankee) was prolific in the 1970s, and the wound up reforming in 2005 after a 29-year hiatus. In 1975, they released their eponymous third album, and from this effort comes “Turquoise,” produced by Steve Rowland, the man who discovered Peter Frampton.

By RotoRob
This entry was posted on Saturday, October 23rd, 2021 at 11:51 am and is filed under BASKETBALL, RotoRob, The Wire Troll. You can follow any responses to this entry through the RSS 2.0 feed. Both comments and pings are currently closed.