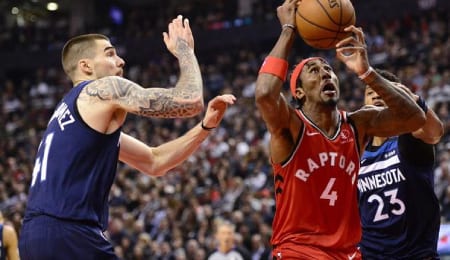 Juan Hernangomez (left) has made an immediate impact in Minnesota. (Frank Gunn/The Canadian Press via AP)

Welcome back to another week of Fantasy basketball analysis. With the NBA All-Star break upon us, now is the time to grab some gems off the wire while the rest of your league is distracted by all the hoopla.

This week, Jayson Tatum vindicated his All-Star selection with a monster game on Thursday; the Clippers are worried about Paul George after he reinjured his hammy; and Devin Booker has been named to his first All-Star Game, replacing the injured Damian Lillard.

Juan Hernangomez, SF/PF, Minnesota Timberwolves (ESPN: 16.8 per cent; CBS: 19 per cent): We last pimped Hernangomez about a year and a half ago, and for two months he proved be an astute pickup, getting plenty of touches and shooting well before his PT decreased in the second half. Now, with Karl Anthony Towns out, the newly acquired Hernangomez is again an intriguing choice as he’s scored at least 14 points in all three games since being dealt to Minny, and on Wednesday added 12 boards, a block and a steal. KAT may not be ready to return immediately after the break, but either way, Minnesota would like to get a chance to see how the two bigs interact down the stretch as the team assesses pending free agent Hernangomez’s future with the Wolves. Last season at this time, Hernangomez was a Fantasy drop; now, the 15th overall pick from 2016 — who may yet develop into a solid NBAer — is an intriguing addition. It’s really impressive how quickly he’s been able to make an impact in Minnesota (see video below).

Landry Shamet, SG, Los Angeles Clippers (ESPN: 24.9 per cent; CBS: 22 per cent): Shamet has been shining with Patrick Beverley out and is likely to see even more PT if George’s injury proves serious. Shamet has been especially effective from downtown lately, canning 19-of-39 from beyond the arc over the last five games. He’s scored at least 11 points in each of the last three as his bucket count has been on the rise since the start of 2020, and is up overall this season. Shamet has been outplaying his projections and looks like a real nice pickup for the short term at the very least.

Duncan Robinson, SF, Miami Heat (ESPN: 44.2 per cent; CBS: 47 per cent): Robinson’s long-distance shooting has garnered enough attention that he’s participating in the Three-Point skills contest this weekend, so why isn’t he on your Fantasy team? He’s put up at least 17 points in four straight games, playing at least 31 minutes and recording at least three assists in each. Robinson’s PT has been rising all season, and he’s morphed into a major three-point asset, averaging 3.5 treys per game. We touted him in late-November, and this is your last chance to grab him before he’s owned in over 50 per cent of leagues.

Furkan Korkmaz, SG, Philadelphia 76ers (ESPN: 14.5 per cent; CBS: 28 per cent): Back-to-back games of at least 31 points earned Korkmaz a ticket to the starting lineup, and while he had a clunker in his first game in the starting five, he’s definitely worth a look. His PT is up to a season best 25.5 MPG this month, and he’s taken a nice step forward with his bucket count this season. Korkmaz has even shown some dunk dazzle, eliciting some serious joy from Joel Embiid and the rest of the Sixers.

Malik Monk, PG/SG, Charlotte Hornets (ESPN: 19.9 per cent; CBS: 22 per cent): Monk has really elevated his game in February, scoring at least 11 points in every game, including Wednesday when he went off for 25 points, four boards, three assists, two blocks and a steal in 32 minutes. Charlotte will always be second guessed for taking him 11th overall in 2017 when Donovan Mitchell was still on the board, but Monk continues to slowly improve season by season. Monk has consistently been a reserve his entire career, but he’s been making his case as a valuable sixth man lately, and that warrants some Fantasy attention.

Daniel Theis, C/PF, Boston Celtics (ESPN: 43.3 per cent; CBS: 41 per cent): Theis continues to be an unsung hero in Boston, but on a team lacking size, he’s playing an important role and doing a tremendous job. He’s scored nine or more points in four straight, putting up one double-double and flirting with others. Theis has been getting to the line more often than usual this month, and after seeing a slight uptick in touches last season, has become a bigger cog in the offense this season. You can do worse when looking for help at centre, and the fact that Boston was unable to add anyone at the deadline cements his role down the stretch.

American rock band Chicago got its start way back in 1967 and has been at it in some form or another since. When it released its debut, self-titled album in 1969, the band was called Chicago Transit Authority. Two tracks from this effort found its way onto a 1971 single, and the A side was “Questions 67 and 68 (English Version).”

By RotoRob
Tags: Juan Hernangomez
This entry was posted on Saturday, February 15th, 2020 at 7:12 pm and is filed under BASKETBALL, RotoRob, The Wire Troll. You can follow any responses to this entry through the RSS 2.0 feed. Both comments and pings are currently closed.