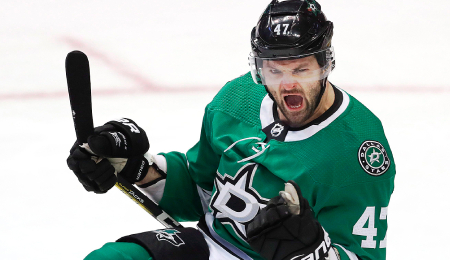 Alexander Radulov has been cleared from the COVID protocol. (LM Otero/AP)

Welcome back to another week of Fantasy hockey. Many teams have hit or even passed the halfway mark of the schedule, so you really need to add some juice to your team through the waiver wire.

This week, Ryan Reaves scored his first two goals of the season as the Rangers moved into first place in the Metro; Dmitry Orlov earned himself a two-game suspension; and the NHL says it’s still on track to end the regular season in late-April.

Alexander Radulov, RW, Dallas Stars (ESPN: 7.5 per cent; CBS: 34 per cent): The last time we checked in on Radulov, he was coming off a career season and tearing it up in the playoffs. Unfortunately, thanks to ineffectiveness and injuries, he’s been mired in a downward spiral since. Still, it’s hard to believe Radulov is done; he was better than a point per game player in limited action last season. He was just removed from the COVID list and, as expected, he suited up Friday (going +1 with three shots), so let’s hope the time off acts as a reset for the second half. Radulov isn’t the dominant force he was once, but at least he has more penalty minutes this season (see video below for a taste of his feisty side), so that’s something. At his best, this is one shifty dude; it could be worth taking a chance on him to see if he can get back to that level, or at least close to it.

Ryan Reaves, RW, New York Rangers (ESPN: 1.9 per cent; CBS: 5 per cent): It’s been over three years since we last recommended Reaves, and he did us proud by putting up a solid half season, but his last two campaigns in Vegas left something to be desired. Well, he’s getting it done on Broadway now, firing home his first two goals of the season on Wednesday before adding a helper on Friday to prove he can offer more than veteran toughness to the Rangers’ fourth line. Reaves is seeing his most ice time since 2018-19, and while no one will confuse him as a major offensive threat, his enforcer-like presence and periodic goals make him a useful asset in deep formats.

Adam Larsson, D, Seattle Kraken (ESPN: 21.4 per cent; CBS: 7 per cent): Not that he ever supplied much offense, but Larsson hasn’t really been the same since breaking his leg early in the 2019-20 season. Having said that, with Jamie Oleksiak out the last couple of games, the Kraken really leaned on Larsson (28:06 TOI on Thursday), and he did manage an assist the game before that. Larsson’s scoring has improved a tad this season, but where he’ll really help you is in hits (among the league leaders with 97), so consider him a solid streaming option in that regard.

Conor Sheary, LW, Washington Capitals (ESPN: 1.6 per cent; CBS: 9 per cent): Sheary had a decent bounce back effort in 2018-19, but has really never come close to duplicating his 2016-17 performance. Still, he’s a useful player in deeper leagues (16 teams or more), and was just removed from COVID protocol. Sheary had actually been rolling before going into protocol, racking up 10 points in his previous 11 games, so don’t sleep on the former Sabre.

Babe Ruth (the band, not the hot dog eating slugger) was originally a trio, but later added Dave Punshon and Dick Powell (not to be confused with this Dick Powell). The band’s debut album, First Base, was released in 1972, and featured “Joker,” one of its signature longer tracks.

By RotoRob
This entry was posted on Saturday, January 22nd, 2022 at 11:52 am and is filed under HOCKEY, RotoRob, The Wire Troll. You can follow any responses to this entry through the RSS 2.0 feed. Both comments and pings are currently closed.