The Wire Troll: De’Andre Hunter Back in Action 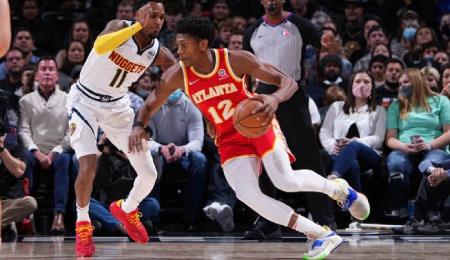 De’Andre Hunter could be very useful for Atlanta. (The Athletic)

Welcome back to another week of Fantasy basketball. We’ve recently passed the season’s halfway point, so you better mine that wire with ferocity, my peeps!

This week, Chicago’s executive team is thrilled that the Bulls have turned things around so quickly; Rudy Gobert (COVID-19) has been cleared to return for the scuffling Jazz; and Milwaukee flexed its muscles again by drubbing the Dubs.

De’Andre Hunter, SF/PF, Atlanta Hawks (ESPN: 8.8 per cent; CBS: 39 per cent): Hunter’s been rather injury prone since entering the league, and this season is no exception as he just returned on Wednesday from a two-month absence because of his wrist. Still, he wasted no time in making his presence felt, scoring 15 points in 24 minutes, with three treys, a block and a steal. On Friday, Hunter was even better, with 20 points and three blocks; he was able to make some nice moves to create space for himself, and even flashed some passing skills (see video below). His bucket count is down so far this season, but with John Collins rumoured to be on the way out of town, big things could be coming. Hunter is a capable defender with great catch and shoot skills, but his upside is probably limited to being the third option on offense (although if Collins does get dealt, that may change).

Ayo Dosunmu, SG, Chicago Bulls (ESPN: 0.7 per cent; CBS: 3 per cent): Dosunmu, who on Thursday became the 34th player in Illinois basketball history to join the Illinois Basketball Honored Jersey Program, has been getting more burn recently with with Alex Caruso (foot/Covid) out. While Dosunmu was quiet offensively on Friday, twice in the past five games he’s scored double digit points as his touches have risen this month and he’s shown flashes of great efficiency. The rookie has been relatively healthy this season, and while his overall minutes remain less than desirable, he’s obviously gaining the team’s trust over time, making him a potential target in deeper formats — especially with Zach LaVine heading for an MRI on his knee.

Grayson Allen, SG, Milwaukee Bucks (ESPN: 8.7 per cent; CBS: 33 per cent): Despite some injury issues early in his career, Allen has gotten better every season, and with him currently seeing tons of action while Jrue Holiday (ankle) has been out, it’s a great time to pounce. Allen got the flu last month and really struggled with his shot when he returned… then, he got COVID and missed more time. Upon his return on Thursday, he shook off his shooting woes to can 6-of-10 from the field and 3-of-7 from downtown for 15 points with five boards, two steals and a block. Allen has shot better this month, and has been hoisting way more long bombs this season.

Amir Coffey, SG, Los Angeles Clippers (ESPN: 4.1 per cent; CBS: 21 per cent): Coffey’s a capable defender, but more recently we’ve also been getting to see what he can do on offense thanks to Paul George being out. Coffey had been percolating this week, but shot poorly on Thursday; even so, he still found a way to flirt with a triple double thanks to six boards and five dimes. He’s sinking more buckets this month and thanks to more PT this season, his three-point production has doubled. It’s clear that even as the Clippers get healthy, Coffey has earned himself more burn going forward, so consider him a right-now and a potential rest-of-season asset.

Lance Stephenson, SF, Indiana Pacers (ESPN: 7.2 per cent; CBS: 25 per cent): It’s been nearly three years since we last suggested Stephenson as a Fantasy option. Well, he didn’t exactly validate our pick at the time, but did finish strong over the final few weeks of the season. Since then, he’s played in China and in the G-League, but returned to the NBA last month on a 10-day deal for Atlanta. He shot poorly and wasn’t re-signed, but did wind up in Indy earlier this month and had been getting some nice burn until Friday. Stephenson earned a second 10-day contract with the Pacers thanks to a 20-point first quarter explosion a week and a half ago that proved he can still ball. His increased usage over the last week makes him an intriguing short-term pickup, with the potential for more if the team signs him for the remainder of the season.

Marvin Bagley III, PF, Sacramento Kings (ESPN: 39.8 per cent; CBS: 50 per cent): In retrospect, it’s been easy to question Bagley going second overall in the 2018 NBA Draft. Hell, just look at what Deandre Ayton and Luka Doncic have accomplished so far. In fact, you could make the argument that Bagley has accomplished less than any of the top seven picks from this draft, but he’s trying to make up for that now. On Friday, he was a force at both ends of the court, reaching a new season-high in points — for the second straight game. Now a fixture in the starting lineup, Bagley isn’t producing as much at the line this month, but his overall work from the stripe has really bounced back this season as he tries to turn things around after a horrid start.

English mod band The Jam got its start in 1979, and despite only sticking around until 1982, left us with a treasure trove of musical goodness. In 1982, the band released The Gift, its sixth and final album, featuring the lead single “Town Called Malice,” which hit No. 1 on the UK Singles Chart.

By RotoRob
This entry was posted on Saturday, January 15th, 2022 at 2:45 pm and is filed under BASKETBALL, RotoRob, The Wire Troll. You can follow any responses to this entry through the RSS 2.0 feed. Both comments and pings are currently closed.