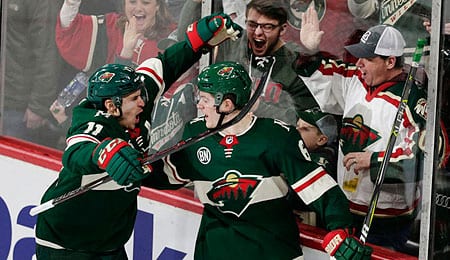 Ryan Donato (right) looks like a new player for the Wild. (The Associated Press)

Welcome back to another week of Fantasy hockey. With February finally finished, we’re clearly into the homestretch of the season now. Don’t let up now!

This week, last-place Ottawa finally relieved Coach Guy Boucher of his duties; in his first game back in his old home, John Tavares was booed mercilessly; and things continue to get worse for the Oilers as they have now lost winger Jesse Puljujarvi to season-ending hip surgery.

Ryan Donato, LW, Minnesota Wild (ESPN: 1.7 per cent; CBS: 27 per cent): We recommended Donato at the end of December, but he never really got that bump in PT we anticipated, so he continued to scuffle. Traded to the Wild (with a conditional 2019 fifth round pick for Charlie Coyle) a few days before the deadline, he’s looked like a different player in Minny, getting points in all four games (1-5-6) while going +3 (the goal being in overtime — see video below). Donato is a kid that displays great awareness in the offensive zone, and while earlier this season he wasn’t getting the same kind of puck luck he had as a rookie, he’s been flashing tremendous playmaking ability since the trade so is worth scooping up to see if this is for real.

Filip Hronek, D, Detroit Red Wings (ESPN: 0.6 per cent; CBS: 12 per cent): With Nick Jensen dealt at the deadline, Hronek has seen a spike in ice time — especially on the penalty kill — and now he’s likely to get even more responsibility with Trevor Daley hurt. Hronek has spent half this season in the AHL, showing tremendous offensive talent (23 points in 28 games), and he’s looked so much better since his latest NHL recall, picking up four assists over the last four games. Detroit is focused on the future, and he’s a huge part of that, so expect him to continue to log heavier minutes down the stretch.

American singer Lionel Richie found great success after leaving the Commodores, where he got his start way back in the late-’60s. In 1983, he released his second solo album, Can’t Slow Down, which sold over 20 million copies. Here’s the title track.

By RotoRob
This entry was posted on Saturday, March 2nd, 2019 at 4:47 pm and is filed under HOCKEY, RotoRob, The Wire Troll. You can follow any responses to this entry through the RSS 2.0 feed. You can skip to the end and leave a response. Pinging is currently not allowed.