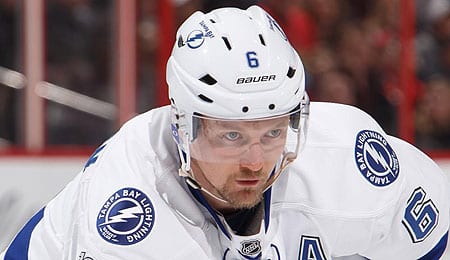 Veteran Anton Stralman will get all the PT he can handle. (NHL.com)

Welcome back to another week of Fantasy hockey. We’re now nearing the end of October, so it’s nearly time to start honestly assessing your team’s strengths and weaknesses.

This week, the NHL lost one of its former leaders in John Ziegler; Tom Wilson‘s 20-game suspension was upheld; and Scott Foster (the Chicago emergency goalie pressed into action last season), will help the Hawks at optional morning skates.

Anton Stralman, D, Tampa Bay Lightning (ESPN: 2.2 per cent: CBS: 11 per cent): With his offensive production in decline the past three seasons, Stralman can’t be counted on for a ton of points, but last season, he stayed healthy for the first time in a while, and enjoyed a career-best +29. Now, with Victor Hedman (upper body injury) out, the defensive pairing of Stralman and Ryan McDonagh will be asked to play some serious minutes. On Friday, Stralman played a season-high 25:05, going +1 with four blocked shots and two takeaways, so the veteran makes for a great short-term pickup. He plays a smooth game, can deliver the occasion massive hit (see video below) and is capable of logging big minutes, so can really help you in a few categories for the time being, or at least as a DFS play on Saturday.

Anthony Duclair, LW, Columbus Blue Jackets (ESPN: 0.9 per cent; CBS: 27 per cent): Injuries have played a role, but Duclair has struggled to rediscover the form he showed in his sophomore season when he potted 20 goals and 44 points for the Coyotes in 2015-16. With two goals on Thursday, he doubled his season output and now has six points through nine games with an even +/- and a whopping 23.5 shooting percentage. Duclair is seeing more ice time than ever before, and he’s getting second unit power play time, scoring half his goals with the man advantage so far. About a week and a half ago, he scored an unbelievable goal against the Flyers, showing some mad skills. It’s time to pick the kid up.

Zdeno Chara, D, Boston Bruins (ESPN: 12.1 per cent; CBS: 36 per cent): Try to find a Habs’ fan that doesn’t hate this guy, but Chara just keeps on rolling at age 41. Yes, he’ll need days off from practice to stay fresh, but he can still bring it come game-time as evidenced by Thursday’s two-goal performance in which he ripped five shots on net. Chara still produces a goodly amount of penalty minutes, too, and if he can stay healthy enough to play 75 or more games this season, he’ll be a nice asset.

Alex Tuch, RW, Vegas Golden Knights (ESPN: 3.6 per cent; CBS: 43 per cent): Tuch missed the start of the season with an injury, but returned to action Wednesday and ripped five shots in 17:39. On Friday, he picked up a helper while adding three shots (and missing two others) in 17:51. Traded to Vegas in 2017 by a Minny squad that needed to protect assets in the expansion draft, Tuch has the potential to develop into a star, so we’d suggest you add him while you can.

Laurent Brossoit, G, Winnipeg Jets (ESPN: 1.8 per cent; CBS: 9 per cent): Brossoit has been one of the better backup goalies early on, earning another win Friday by turning aside 27 of 28 shots against Detroit. Undefeated so far, he’s only surrendered five goals in his first three games, and looks poised to make way more than the mere 10 starts he had last season for the Oilers. Given that starter Connor Hellebuyck was one of the busiest goalies in the league last year (and is looking a bit shaky early on), expect the Jets to give Brossoit plenty of action, especially if he continues to impress.

Trevor Daley, D, Detroit Red Wings (ESPN: 0.5 per cent; CBS: 1 per cent): Such an important part of the Penguins’ recent back-to-back Cups, 35-year-old Daley is now trying to steady a young, rebuilding Detroit defense corps. And while the +/- will hurt (-5 last season, -1 so far this season), if you need blocks, he’s your man. Daley had a half dozen on Friday and is now tied for 32nd in the NHL in this department.

Melker Karlsson, RW, San Jose Sharks (ESPN: 0.4 per cent; CBS: 1 per cent): As the key player on the Sharks’ fourth line, he’s not exactly in a primo spot to produce, but he has helped out with the penalties, with six minutes over the last five games. Around three weeks ago, Karlsson was actually practicing with the top line in the absence of Joe Thornton, so the Sharks must think he has some offensive upside. See how that plays out this season.

Lucas Wallmark, C, Carolina Hurricanes (ESPN: unowned; CBS: 1 per cent): Wallmark tends to make an impact when given the chance to play, and while he only has one goal so far, he’s picked up four minutes in penalties in the last three games.

Philipp Grubauer, G, Colorado Avalanche (ESPN: 15.8 per cent; CBS: 45 per cent): Grubauer is off to a slow start, but should wind up as one of the top backups in the league, as usual.

Ryan Reaves, RW, Vegas Golden Knights (ESPN: 1.1 per cent; CBS: 8 per cent): Reaves is a dude that’s pretty much been off the Fantasy radar, but the veteran potted goals in back-to-back games this week, earning himself extra ice time on Friday. Let’s see how this plays out.

Duke Ellington was one of the most important figures in jazz history, penning the classic “In a Sentimental Mood,” in 1935. Here’s the version from the 1961 album, The Best of Duke Ellington and his Famous Orchestra.

By RotoRob
Tags: Anton Stralman
This entry was posted on Saturday, October 27th, 2018 at 5:13 pm and is filed under HOCKEY, RotoRob, The Wire Troll. You can follow any responses to this entry through the RSS 2.0 feed. Both comments and pings are currently closed.