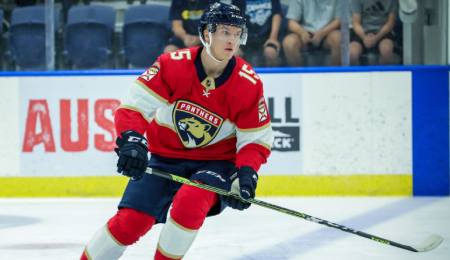 Anton Lundell looks like another star in the making in Florida. (@FlaPanthers)

Welcome back to another week of Fantasy hockey, and the madness that is trying to set your lineup amid daily pandemic losses. We’ll do our best to help you navigate this shit show.

This week, Nikita Kucherov (LBI) finally returned, wasting no time in making his presence felt for the Lightning; Anaheim is the latest team besieged by Covid, putting the kibosh on its Thursday game; and the struggling Kraken has now lost Jaden Schwartz (hand) for a least a month.

Anton Lundell, C, Florida Panthers (ESPN: 4.1 per cent; CBS: 36 per cent): Florida’s 2020 first round pick is enjoying a stellar rookie effort and seemingly getting better by the day. With an assist on Thursday, he’s now scored points in five straight (2-4-6), and other than some struggles in November, he’s been a consistent source of points. Lundell’s value has risen even more now that he’s moved up to the second line with Sam Bennett currently suspended for three games. Hell, Lundell is even getting shootout opportunities recently. Could the Panthers have another Aleksander Barkov on their hands here? Well, Lundell’s numbers compare favourably to what Barkov did in his first season. The Finnish youngster is just one of those players that seems to think the game faster than his opponents, plus he’s a hard worker (see video below).

Damon Severson, D, New Jersey Devils (ESPN: 9.5 per cent; CBS: 33 per cent): It’s been nearly two years since we last recommended Severson, and he justified our faith by scoring well down the stretch (13 points in 19 games). However, last season he wasn’t quite as effective as his power play production decreased. Now, with Dougie Hamilton (jaw surgery/Covid-19) out, Severson is quarterbacking the PP1 unit and really thriving, piling up two goals and three assists over a three-game span before getting shut out on Thursday. December was Severson’s best month so far, and he’s building off that, having already surpassed last season’s goal total. With his size and shot, he’s a real asset — especially when he’s producing consistently like he’s been the past few weeks.

Brett Seney, LW, Toronto Maple Leafs (ESPN: unowned; CBS: unowned): With the Toronto forward corps thinning thanks to Covid, Seney has been recalled to the taxi squad, and there’s a strong chance he’s going to be the 4C based on Friday’s practice. He showed promise as a rookie with the Devils in 2018-19, but has only played three combined NHL games since. Yes, Seney is small, but he’s a strong playmaker and is averaging nearly a point per game in the AHL, so let’s hope he gets more of an opportunity than he did in his last recall in December (one game, 7:10 of ice time).

Marcus Johansson, LW/C, Seattle Kraken (ESPN: 0.1 per cent; CBS: 1 per cent): The last time we checked in on Johansson, he was clicking on the Devils’ second line. Well, he’s bounced around the league since then, and has generally struggled this season after signing a one-year deal with the Kraken in early August. However, with Jaden Schwartz undergoing hand surgery and out for at least a month, Johansson finds himself on the top line, so has a real opportunity to provide some value. Johansson has speed and skill; now’s his chance to turn that into some production.

Jesperi Kotkaniemi, C, Carolina Hurricanes (ESPN: 6.3 per cent; CBS: 21 per cent): Right at the outset of his NHL career we recommended Kotkaniemi, and he did enjoy a strong rookie season. Unfortunately, he’s struggled to duplicate that, but now that he’s in Carolina, he’s getting back to that level — even if many believe Montreal was wise to not match the Hurricanes’ offer sheet. Still, Kotkaniemi has recorded a goal and seven assists over the last six games, and is just two minutes in penalties shy of his total from last season — in 24 fewer games. Breakout alert.

Brady Skjei, D, Carolina Hurricanes (ESPN: 3.9 per cent; CBS: 8 per cent): It’s been nearly five years since we last pimped Skjei, but he’s making the most of plenty of shorter shifts lately, scoring a goal and two assists on Friday (just his second career three-point showing), a game after a two-goal effort. Over the last four contests, he’s red hot (3-4-7), and yes, he’s benefited from some fortune (61 GF percentage vs. 49.99 xGF percentage), but he’s already topped last season’s total of secondary assists.

Martin Jones, G, Philadelphia Flyers (ESPN: 4.4 per cent; CBS: 15 per cent): Jones’ struggles in recent season have been well documented, but he’s played better since joining the Flyers and on Saturday has a chance to go up against his old team, the Sharks.

Dan Vladar, G, Calgary Flames (ESPN: 6.6 per cent; CBS: 20 per cent): Okay, Vladar’s numbers in starts on back-to-back nights this week were poor, but he actually was very sharp in Thursday’s game. He’s now been in back-to-back games twice this season, and has taken a big step forward since joining the Flames after his rough debut in Boston last season.

The Last Waltz — the album of The Band‘s farewell show on November 25, 1976 in San Francisco — remains one of the greatest live discs in musical history. It featured guest performances by a veritable who’s who of rock ‘n roll royalty, including Neil Young, seen below performing his classic “Helpless,” with backing vocals from Joni Mitchell.

By RotoRob
This entry was posted on Saturday, January 8th, 2022 at 12:27 pm and is filed under HOCKEY, RotoRob, The Wire Troll. You can follow any responses to this entry through the RSS 2.0 feed. Both comments and pings are currently closed.