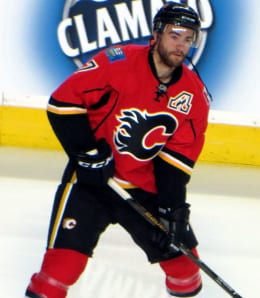 T.J. Brodie will be asked to do more for the Flames. (Wikipedia)

Welcome back to another week of Fantasy hockey. We’re into February now, so it’s time to get deadly serious about making your push. Milk that wire, peeps.

This week, Canada Sports Hall of Famer Brian Glennie passed away at the age of 73; Cody Cici (ankle) will be out at least a month; and Shea Weber has suffered an LBI that will cost him at least a week.

And now, let’s get to this week’s Fantasy hockey waiver wire recommendations, heavy on the blueline this time around…

T.J. Brodie, D, Calgary Flames (ESPN: 30.3 per cent; CBS: 25 per cent): Earlier this season, he dealt with his own health scare, but now that Brodie is healthy, he’s being counted on as one of the top pair defenseman in Calgary with Mark Giordano needing an MRI. As a solid right-handed shooting defenseman who’s contract expires after this season, Brodie was a potential trade chip, but Giordano’s injury almost assuredly scuttles that scenario. Brodie snapped a long drought with an assist on Thursday, ans his ice time is really spiking the last two games. This dude is a good puck mover (except when he’s not — see video below), so expect the points to start coming with more regularity now.

Guillaume Brisebois, D, Vancouver Canucks (ESPN: unowned; CBS: unowned): With Oscar Fantenberg (UBI) hitting the IR, the Canucks have brought up Brisebois. Strictly a deep league flier at this point, Brisebois was the Canucks’ third round pick in 2015. He played eight games with Vancouver last season, failing to register a point, but he’s stepped up in the AHL this season, potting 14 points with a lofty +21 ranking. Brisebois is capable of playing fairly big minutes and is a solid penalty killer.

Kailer Yamamoto, RW, Edmonton Oilers (ESPN: 40.8 per cent; CBS: 49 per cent): Yamamoto has recently joined Ryan Nugent-Hopkins and Leon Draisaitl on the Oilers’ second line, finding instant chemistry. With an assist on Thursday, Yamamoto now has points in five of his last six games (3-3-6) and a career high five goals and six assists in four fewer games than he played last season. He’s even playing a more physical game, with 25 hits through 13 games. Edmonton’s first round pick in 2017 looks like he’s in the NHL for good now.

Jack Campbell, G, Toronto Maple Leafs (ESPN: 14.5 per cent; CBS: 24 per cent): The Leafs finally addressed their putrid backup goalie situation, trading for Campbell this week. And with starter Frederik Andersen (neck) still out, Campbell has been thrust right into the fire and could start both games this weekend. The fact that Campbell is signed for another two seasons gives the Leafs some certainty in net going forward. He certainly wasn’t sharp in his Toronto debut, and has been inconsistent lately, but he was solid last month (2.86 GAA). Still, Campbell has struggled to find the form he had last season when he enjoyed a fine 2.30 GAA, but he’s going to get a chance to right the ship down the stretch.

Joel Eriksson Ek, C, Minnesota Wild (ESPN: 1.8 per cent; CBS: 4 per cent): Eriksson Ek played the hero Friday, potting a pair of goals for his first career multi-goal game. He’d been quiet this month, but enjoyed a solid January (9-1-5-6), so perhaps he’s ready to heat up again as he continues his career season. Eriksson Ek has now matched his career best with two game-winners this season.

Matt Niskanen, D, Philadelphia Flyers (ESPN: 39 per cent; CBS: 41 per cent): After putting up five points in three games, Niskanen was shut out on Thursday (then again, so was everyone on the Flyers). He still registered another three shots, giving him 10 blasts over the last three games. Saturday, he’ll return to Washington for the first time since getting dealt from the Caps, so should be motivated. Niskanen has been a real driving force in the Flyers’ quest to return to the playoffs this season.

Damon Severson, D, New Jersey Devils (ESPN: 21.3 per cent; CBS: 28 per cent): Playing on the Devils’ second D pairing, Severson has seriously found his offense lately, recording points in five straight games. He’s been getting more and more shots as the season has progressed, and although he’s still behind pace to match last season’s career best 39 points, he’s improved his plus-minus ranking and is seeing plenty of power play time now, which can only help his numbers down the stretch.

Nikita Zadorov, D, Colorado Avalanche (ESPN: 10.3 per cent; CBS: 19 per cent): Despite being on Colorado’s third D pairing, Zadorov has found ways to contribute lately — in a big way. Before getting shut out Thursday, he had put up points in four straight, including three consecutive multi-point efforts (2-5-7). Despite not shooting much last month, he managed a goal, and is now just a point shy of matching his season total from 2018-19. Zadorov has also improved his CF percentage to a career-best 49.7 with a GF percentage of 61.04.

The late, great Aretha Franklin was known as the Queen of Soul for a damn good reason. From 1956 until her death in 2018, she compiled a phenomenal discography. In 1968, she released her 12th studio album, Lady Soul, and from this effort comes “Since You’ve Been Gone (Sweet Sweet Baby),” the third single from the album.

By RotoRob
Tags: T.J. Brodie
This entry was posted on Saturday, February 8th, 2020 at 9:30 pm and is filed under HOCKEY, RotoRob, The Wire Troll. You can follow any responses to this entry through the RSS 2.0 feed. Both comments and pings are currently closed.