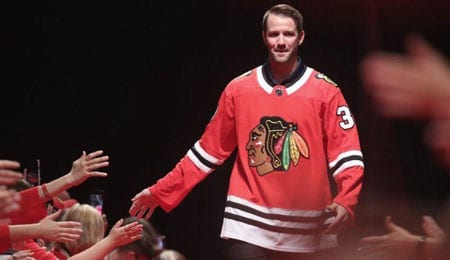 Welcome back for another season of Fantasy hockey waiver wire picks and analysis. Every other week, we’ll bring you a selection of widely available players on the rise, always available in a minimum of 50 per cent of ESPN and CBS leagues.

This week, Washington’s Tom Wilson has appealed his 20-game suspension for headhunting; San Jose forward Barclay Goodrow was rewarded for his career season with a two-year extension; and Ilya Kovalchuk has started the season on the Kings’ top line, beefing up chances he’ll enjoy a successful return to the NHL.

And now, let’s get to our first batch of Fantasy hockey waiver wire recommendations for the 2018-19 season, this week with a decidedly Hurricane heavy vibe to it…

Cam Ward, G, Chicago Blackhawks (ESPN: 13.4 per cent; CBS: 35 per cent): Ward’s first period with the Hawks wasn’t exactly a thing of beauty, but he settled in nicely after that and looks poised to start again on Saturday in St. Louis. While Corey Crawford (concussion) remains out, Ward will be a great addition, and we’re expecting him to improve on his save percentage going forward. After 13 years in Carolina (see video below for a montage of his Hurricane highlights), Ward signed with the Hawks, expecting to be in a backup role, but now he finds himself as a key figure early on as Chicago looks to bounce back after last season’s nightmare.

Curtis McElhinney, G, Carolina Hurricanes (ESPN: 2.5 per cent; CBS: 7 per cent): How good did McElhinney look in his Hurricane debut on Friday? He stopped 31 shots while giving up just one goal to lead Carolina to an upset win over Columbus. The 35-year-vet was waived by Toronto and sure landed on his feet. Right now, starter Ron Darling is hurt and backup Petr Mrazek is, well… Petr Mrazek. So over the next three weeks while Darling is out, McElhinney has his greatest chance yet to really challenge for a job, and we think he has the talent to seize it.

Micheal Ferland, LW, Carolina Hurricanes (ESPN: 6.2 per cent; CBS: 12 per cent): Ferland has shown steady improvement in each season he’s played and now that he’s in Carolina, he looks even better early on. He’s been one of the hottest forwards in the NHL through the first three days of play, scoring once, setting up another and recording a +2 with five hits. On Friday, Ferland led the team with six shots and pitched in with two hits and a block. Last season, he doubled his assist total to 20, and we could see him getting even more this season considering his boost in PT. Part of the huge draft day trade from Calgary, Ferland is about to enter his prime and should get a bigger opportunity with the Canes, so we’re expecting him to build on his breakout season.

David Savard, D, Columbus Blue Jackets (ESPN: 0.6 per cent; CBS: 5 per cent): Savard’s offensive production has dipped for three straight seasons, but he’s expected to play big minutes this season, so we can see that changing. He picked up his first assist of the season Friday and through two games is +1 with four shots on goal, one of which created a rebound. Savard is also off to a good start in blocks with four already. His CF percentage isn’t good (46.05), but should bounce back based on his historical numbers.

Jesperi Kotkaniemi, C, Montreal Canadiens (ESPN: 9.5 per cent; CBS: 30 per cent): Kotkaniemi, the third overall pick in the draft this year, is forcing his way onto the Fantasy radar. The 18-year-old Finn has started the season on Montreal’s second line with fellow Finn Joel Armia and the uber talented Jonathan Drouin. In his NHL debut, Kotkaniemi picked up an assist on the power play and recorded two shots with two hits in 15:05 of ice time. This kid’s going to be good, so grab him while you can.

Jordan Staal, C, Carolina Hurricanes (ESPN: 21.7 per cent; CBS: 16 per cent): Veteran centre Staal is off to a nice start, scoring once off seven shots in the debut, and then recording a +1 with another three shots on Friday. That shot total jumps out, and if it continues, he should easily get back to the 20-goal mark for the first time since 2015-16. Someone has to pick up the slack now that Jeff Skinner‘s gone, right?

Jordan Martinook, LW, Carolina Hurricanes (ESPN: unowned; CBS: unowned): After showing some promise in his first two full seasons in Arizona, Martinook really struggled to put up many points last season, and his PT slipped as a result. Apparently, he was playing the second half with a torn thumb ligament, so small wonder. Now Martinook has been given a fresh start in Carolina, and has already recorded a goal (on a sweet wrist shot past Sergei Bobrovsky) and four shots. Promisingly, Martinook saw much more ice time on Friday, and if that trend continues, he could be a sleeper for the Canes, so keep an eye on him. There still may be some upside for this 2012 second round pick.

Today we delve into one of the greatest movie albums of all time, specifically Pink Floyd‘s The Wall, with music taken directly from the film (with Italian subtitles, to boot!). Here’s “The Happiest Days of Our Lives” leading into “Another Brick in the Wall (Part Two).”

By RotoRob
Tags: Cam Ward
This entry was posted on Saturday, October 6th, 2018 at 2:13 pm and is filed under HOCKEY, RotoRob, The Wire Troll. You can follow any responses to this entry through the RSS 2.0 feed. Both comments and pings are currently closed.