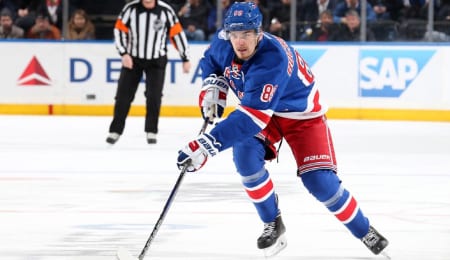 Could Pavel Buchnevich start achieving his potential at last? (NHL.com)

Welcome back to another week of Fantasy hockey. We’ve reached the All-Star break now, so while your league mates are busy watching the fastest skater competition, show them how fast you are on the waiver wire.

This week, Auston Matthews is out with a wrist injury and will miss the All-Star Game; Gritty apparently punched a kid, and now the police are investigating the Flyers’ fantastically psychotic mascot; and Rangers leading scorer Artemi Panarin missed Tuesday’s game with an UBI (more on this below).

And now, let’s get to this week’s Fantasy hockey waiver wire recommendations, with plenty of Eastern Conference wingers on tap in this installment…

Pavel Buchnevich, RW, New York Rangers (ESPN: 17.1 per cent; CBS: 45 per cent): Buchnevich is a dude that’s mostly been off our Fantasy radar, but the Rangers’ 2013 third round pick has turned into a solid top nine guy. With Panarin out with an upper body injury, Buchnevich was bumped up to second line, but with the Rangers off until January 31, it’s unclear how long the promotion will last. Still, Buchnevich paid immediate dividends with a goal Tuesday (see video below) in a season-high 24:18 of ice time, and he’s bounced back this month after slumping in December… which followed a really big start to the season. He’s on pace for a career-best 44 points, and as the subject of trade rumours, he could wind up in an even better situation depending on how things shake out at the deadline. Once upon a time, Buchnevich was a projected first rounder, so perhaps there is still upside here if he can tap into his potential.

Frank Vatrano, LW, Florida Panthers (ESPN: 30.3 per cent; CBS: 24 per cent): It’s been over four years now since we last recommended Vatrano, during his rookie season. He took a step up the following season before struggling with injuries in 2017-18. Since being dealt to the Panthers, however, Vatrano’s been on the upswing, enjoying a career season in 2018-19 and on pace to surpass that this season. He’s on fire right now, scoring three times on Tuesday (his second career hat trick, but first with Florida), giving him a five-game point streak (5-4-9, +6).

Cal Clutterbuck, RW, New York Islanders (ESPN: 2.3 per cent; CBS: 3 per cent): Clutterbuck has been dealing with a wrist injury, but he’s going to start skating when the Isles come off their bye week, which should mean he’ll return around mid-February. His modest offense was down further this season, but that’s not his chief allure (he hasn’t scored more than eight goals since 2015-16). Clutterbuck is the king of hits, regularly placing among the league leaders. In fact, he’s still 35th in the NHL despite missing the last 16 games.

Aaron Dell, G, San Jose Sharks (ESPN: 7.5 per cent; CBS: 18 per cent): With Martin Jones continuing to struggle, Dell has been seeing more action lately, but he hasn’t exactly been taking advantage of it. Still, Dell is a possible trade chip at the deadline given his low salary, and the fact is — notwithstanding his last couple of games — he’s been very sharp in January (four wins, 2.43 GAA, .924 save percentage), and he’s generally been improving as the season has progressed. He could be a nice play in the second half.

Justin Williams, RW, Carolina Hurricanes (ESPN: 49.7 per cent; CBS: 18 per cent): After signing a one-year deal to return to the Hurricanes, the veteran Cobourg, Ont.-native returned to action this week, wasting little time making an impact by firing two goals in his second game back. Williams has really rediscovered his offense in his second tour of duty in Carolina, recording back-to-back seasons of 50-plus points, and getting off to a great start in 2020. He should be well rested for a big finish.

Connor Brown, RW, Ottawa Senators (ESPN: 23.1 per cent; CBS: 21 per cent): In his first season in Canada’s capital, Brown is enjoying a career year, but he’s really taken his game to a new level recently, putting up a goal and an assist in each of the last three games. He had a solid showing in December, but is now averaging nearly a point per game in January while reaching double-digit goals for the first time since 2017-18. Brown looks like a top six player right now, but do note that he has a tendency to have stretches when he looks more like a depth player. So grab him while he’s hot, but be prepared to cut bait when he thaws.

Blake Coleman, LW, New Jersey Devils (ESPN: 45.3 per cent; CBS: 30 per cent): A star for Miami in college, Coleman just keeps getting better every season he’s been in the NHL. He recently potted five goals in a four-game stretch to pull within one of his second straight 20-goal season. Coleman looks like he’s going to top 30 for the first time, yet is still widely available on the wire.

Irish singer Andrew Strong is best known for his work from The Commitments, the classic 1991 film that helped bring soul music back in vogue. Here’s a cover of the Wilson Pickett classic “In the Midnight Hour” from the soundtrack.

By RotoRob
Tags: Pavel Buchnevich
This entry was posted on Saturday, January 25th, 2020 at 1:44 pm and is filed under HOCKEY, RotoRob, The Wire Troll. You can follow any responses to this entry through the RSS 2.0 feed. Both comments and pings are currently closed.