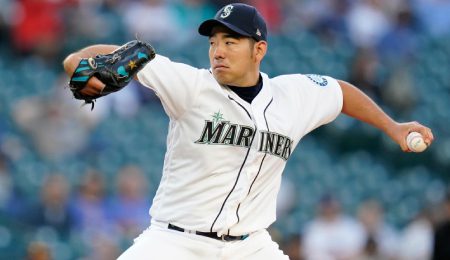 Yusei Kikuchi may have pitched his way out of the rotation. (Elaine Thompson, The Associated Press)

The Seattle Mariners have taken a massive leap forward this season, and continue to play well enough down the stretch that they’ve now tied the Toronto Blue Jays in the playoff chase. Without a doubt, 2021 has been an unqualified success.

What’s been most pleasant about Seattle’s surge in the standings is that came as a big surprise. Given the team’s youth movement, not many expected the Mariners to be a playoff contender this season. But here we are in late-September and they still have a good shot at a Wild Card spot.

With the rebuild more or less complete, this team seems legitimately capable of capturing a postseason spot next year. As a result, don’t be surprised to see the team invest more heavily in free agents — especially considering how little money they have tied up for 2022.

Both Yusei Kikuchi and Kyle Seager have 2022 options, so even if Seattle opts to bring them both back, its team salary should only be around $65 million — even after arbitration raises. That could give the team a lot of room to add reinforcements if it so desires… and rumours persist that the Mariners could be a big player this winter.

Seattle could definitely use some extra offense considering it’s near the bottom of the majors in scoring. Which position the Mariners will target for upgrade depends a lot on when Jarred Kelenic and Julio Rodriguez prove ready to be everyday players. It’s also possible Seattle adds a rotation piece, but this is not necessarily a major need.

Let’s take a look at Seattle’s internal free agents to be (listed in alphabetical order):

Tyler Anderson, SP: We really like how Anderson has looked since arriving in Seattle as evidenced by the fact he headlined our waiver wire recommendations earlier this month. Since then, two of his three starts have been solid, and honestly, his addition has helped the Mariners remain in contention. Anderson, taken 20th overall by Colorado in 2011, has been a “great fit” on the team, said Seattle Manager Scott Servais. We’ll see if that translates into another contract in Em City.

Matt Andriese, RP: The Mariners hold a $3.5 million option ($250,00 buyout) on Andriese, but it’s questionable if he’ll be re-signed considering you have to go back to 2017 (when he was still mostly starting) that he offered any Fantasy value. With Boston, his record wasn’t awful, but he was way too hittable and wound up getting released in mid-August. Seattle signed him, and he looked much better, hurling shutout ball in three of four appearances, until getting rocked in his last two appearances. Andriese’s unsightly ERA may relegate him to signing a minor league deal in 2022.

Sean Doolittle, RP: Doolittle was one of the top waiver wire picks back in 2017, and he consolidated that performance with a brilliant 2018 campaign. However, he hasn’t been the same pitcher since, and after proving too hittable in Cincy, he was waived and wound up being another reliever the Mariners claimed off the scrap heap. Unfortunately, Doolittle has done exactly as his name suggests since arriving in Seattle, and given that he’s really never looked worse, is seeing very little use. He’s likely going to have to work his way back to the bigs with a minor league deal next season.

Yusei Kikuchi, SP: Kikuchi holds a $13 million option for 2022, so the questions are how much he wants to stay in Seattle and whether he thinks he’s worth more than that. We recommended him as a waiver wire add last season and it was a decent pick as he enjoyed solid hit rates in August before pitching even better in September. Kikuchi has taken another step forward this season even though he’s been a tiny bit easier to hit. However, he’s been grossly inconsistent this year, and beyond a solid May and spectacular June, he hasn’t been great and is really scuffling this month. In fact, Seattle in thinking about having him skip a start after he was rocked again on Thursday. Clearly, the turtle in the video below is not impressed by the effect this is having on the value of Kikuchi’s baseball card.

James Paxton, SP: What else is new? Like many times before Paxton’s campaign ended early last year, and this year he managed to get four outs in his first start before needing Tommy John surgery. Someone will take a chance on him because his talent in undeniable, but it’s unlikely we’ll see him until July.

Kyle Seager, 3B: Seattle has another big decision to make regarding whether to pick up the $20 million option on Seager. On the one hand, he remains a great source of power (career bests 35 homer and 100 RBI) and is a respected leader on a young team. On the other hand, he’s clearly no longer a top six third baseman, and his rising strikeout rate has led to a career-worst .214 BA. At 34, Seager is unsurprisingly in offensive regression overall despite his power surge. It will be interesting to see how Seattle approaches this given the size of his contract option.

Joe Smith, RP: It’s been quite a while since we last recommended Smith as a Fantasy option, but he just keeps plugging away, often producing very fine results. He was dumpster fire in Houston this year, but the Astros somehow managed to move him to Seattle in the Kendall Graveman trade. Since Smith has come to Seattle, he’s looked like a different pitcher, managing to work his way into a setup role while surrendering just one earned run over his last eight outings. He’s getting long in the tooth, but if he can keep getting batters out, he’ll find work.

In 2004, DJ Stephane Pompougnac put together the compilation album Hotel Costes: Best Of… which includes the top tracks from the first seven volumes of Hotel Costes. From this release comes “No Communication, No Love (Devastating)” by Belgian House DJ Charles Schilling and Pompon F.

By RotoRob
This entry was posted on Saturday, September 25th, 2021 at 1:02 pm and is filed under BASEBALL, Free agents, RotoRob, Team report. You can follow any responses to this entry through the RSS 2.0 feed. Both comments and pings are currently closed.