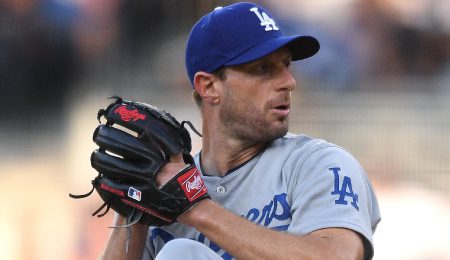 With the 2021 MLB season wrapping up this weekend, it’s time to look back at some of the bigger moves made at the trade deadline. Let’s review some of the hits… and some of the misses.

The day before the deadline, the Dodgers and Nationals pulled off a serious blockbuster deal, with L.A. nabbing Max Scherzer and Trea Turner for Keibert Ruiz, Josiah Gray, Gerardo Carrillo and Donovan Casey.

While it’s going to take some time to see how this trade pans out for Washington, it paid immediate dividends for the Dodgers — in a huge way.

Scherzer has been a completely different pitcher since heading west. While he was having a tremendous comeback season for the Nats, he’s been downright transcendental since donning Dodger blue. This showing likely consolidated his claim on another Cy Young award. Before getting rocked by the Padres on Wednesday, in 10 starts since the deal, Mad Max was a perfect 7-0 with a microscopic 1.43 ERA and otherworldly 0.71 WHIP. Oh, and there’s the 85 Ks in 63 IP — against just eight walks. Wow, talk about nailing a deal. Check out the video below for a hilarious Max mashup.

While Turner hadn’t been hitting quite as well with Washington as he did in 2020 (yet still having a fantastic season), he’s turned it up a notch in L.A. (.335 BA, 934 OPS) and his play is a big part of the reason the Dodgers are still in the mix for the NL West title.

Ruiz struggled to make contact in his brief action with the Dodgers, but after the deal he forced his way up to Washington thanks to a 12-game hit streak at Triple-A. He’s seeing tons of PT since the Nats recalled him, and he’s establishing himself as a full-time big league catcher with great promise (.291/.341/.405).

RHP Gray got roughed up in the very little action he saw in L.A. this year, and has been slightly better for the Nats, holding his own for a bad team. Still, there’s upside here, as we discussed in detail after the trade. We believe this rookie has a chance to be a very fine arm in time, so consider him a serious sleeper for 2022.

One addition that didn’t work out as well as hoped involved the Giants adding some offense for their playoff run. As part of the Cubs’ selloff, infielder Kris Bryant was sent west to San Francisco for two prospects, righty Caleb Kilian and outfielder Alexander Canario. Bryant was enjoying a nice bounce back effort in Chicago (130 OPS+), but with the Giants, his counting cats have been meh and his overall play not quite as good (111 OPS+). It will be interesting to see if the Giants try to re-sign the free agent to be; we wouldn’t be shocked if the Mets make a run at him (depending on how the Michael Conforto situation plays out).

The Yanks landed outfielder Joey Gallo for a boatload of prospects, including RHP Glenn Otto, 2B Ezequiel Duran, SS Josh Smith, 2B/OF Trevor Hauver. Gallo had been healthy and was enjoying a nice rebound for the Rangers, and while he’s remained mostly healthy as a Yankee (except for a few minor woes), he hasn’t been nearly as good, and his BA has been a major downer for Fantasy owners. Hell, since the trade even his usual Gold Glove defense has come into question.

The Rangers slotted Otto into their rotation at the end of August, and while he sparkled in his MLB debut, it’s been mostly downhill since as the 25-year-old went winless through a half dozen starts and was really shelled in his final outing on Thursday. The remaining players Texas received for Gallo are all minor leaguers.

In another deal, the Yankees also landed first baseman Anthony Rizzo in the Cubs’ fire sale, sending a pair of prospects in OF Kevin Alcantara and RHP Alexander Vizcaino to Chicago. After an off year in 2020, Rizzo was hitting better for the Cubs this season, but — he hasn’t been quite as productive since coming to New York, despite slightly raising his BA. He still flashes power from time to time, but it seems his 30-dinger days are done.

As part of the seemingly endless blow up of the Cubs, infielder Javier Baez and righty Trevor Williams were shipped to the Mets for OF prospect Pete Crow-Armstrong. Baez has been healthy this season, and he was enjoying a nice recovery for the Cubs, but since arriving in New York, he’s never hit better. However, we’re still waiting to again see the player that delivered first round value in 2018; in the end, Baez’s greatest contribution to the Mets have been provided a spark for Francisco Lindor.

In reducing his homer rate this season, Williams had looked better for the Cubs, but he’s been even stingier in that regard and has really excelled for the Mets, pitching mostly in long relief. However, despite the fact that he’s done so well, this is a role that limits his Fantasy appeal.

And still with the great Chicago fire sale, Craig Kimbrel was shipped across town to the White Sox for 2B Nick Madrigal and RHP Codi Heuer. After looking so shaky in his first two seasons with the Cubs, Kimbrel was lights out this year, but he’s suffered from some major gopheritis since joining the Pale Hose. Still, this is a dude that’s now just five saves shy of eighth place in MLB history. Not too shabby.

Madrigal’s power saw a nice spike, but his sophomore season ended in mid-June with a hamstring injury. He’ll be a nice building block for the Cubs given that he’s under team control for another five years, however, we’re still waiting to see what he can do over a full campaign.

Heuer showed great promise in 2020, but took a big step back with the White Sox this year despite seeing much more action. With the Cubs, he’s again been a workhorse and his bottom line results have improved (hell, he even bagged a couple of saves), but advanced stats suggest he’s slid even further (4.35 FIP compared to 3.68 with the Pale Hose).

Finally, Philadelphia acquired a familiar face in infielder Freddy Galvis, shipping minor league RHP Tyler Burch to Baltimore in return. Galvis was having a solid year for the O’s (720 OPS), but he’s regressed since returning to the Phillies as his counting cats have left something wanting — despite the fact he continues to see everyday PT.

Despite its association with jazz improviser Norman Connors, Aquarian Dream never really had a hit. This was the closest it came, with “You’re a Star,” from the 1976 album Fantasy.

By RotoRob
This entry was posted on Saturday, October 2nd, 2021 at 12:44 pm and is filed under BASEBALL, RotoRob, Trade Deadline. You can follow any responses to this entry through the RSS 2.0 feed. Both comments and pings are currently closed.