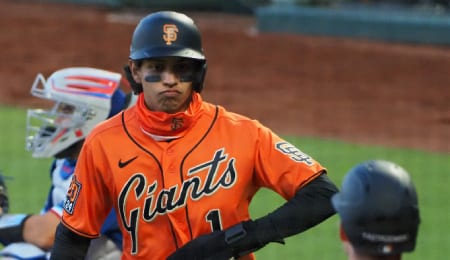 Welcome back to another week of Fantasy baseball. We’re now well into August and while it still feels early in the season, it really isn’t, given the magnification of every game. You can’t sit too long on a struggling player; use the wire, peeps.

This week, Oakland coach Ryan Christenson got in crap for forgetting that being a Nazi isn’t cool anymore; Yankee manager Aaron Boone was thrown off by Phillies fans blowing an air horn — outside of the stadium (yes, New York thinks Philly is too unruly); and Nick Markakis wasted no time in making an impact in his return to the game, spanking a walk-off dinger on Thursday.

Mauricio Dubon, 2B/SS/OF, San Francisco Giants (ESPN: 2.4 per cent; CBS: 11 per cent): Dubon smoked his first jack of the season on Thursday (see video below), a three-run bomb off Kyle Freeland (which caused some payback when Daniel Murphy went yard and then, as he rounded the bases, stared at Dubon). At any rate, Dubon has put up at least one hit and one run in each of the last three games he’s started, and his counting cat numbers look solid considering how much he’s played so far. He flashed at bit more extra-base sock last year, so that homer was nice to see, but with three multi-hit games so far, he’s maintained a solid BA as the super utility dude makes a case to see more regular PT. There’s upside here, so we recommend keeping an eye on Dubon. The former Brewer farmhand — and first Honduras born player to make the bigs — has come a long way since being drafted in the 26th round in 2013 by Boston.

Erick Fedde, SP/RP, Washington Nationals (ESPN: 0.7 per cent; CBS: 3 per cent): In May 2019, we suggested that Fedde could get rotation time because of an injury to Anibal Sanchez. Sure enough, Fedde was in the rotation from mid-May until September, posting mixed results. Well, with Max Scherzer hurting his hamstring this week, Fedde is the most likely arm to benefit again. Fedde looked good in his first start this season, but wasn’t sharp his second time around. He took over on Wednesday after Scherzer was hurt, and looked better, although he remains winless on the season. Still, while Fedde ranks third in ERA among Nationals’ starters, he’s going to need to pound the strike zone more to avoid having that number rise. Give him a look in NL-only leagues pending updates on Scherzer’s status this week.

Antonio Senzatela, SP, Colorado Rockies (ESPN: 27.2 per cent; CBS: 22 per cent): After becoming a full-time member of the rotation last season (earning a June Wire Troll recommendation along the way), Senzatela looks like he’s taking a big step forward this year. He’s now 3-0 with a 2.65 ERA after hurling another solid outing on Friday in Seattle. Improved hit rates and command have been the keys to Senzatela’s turnaround so far as it looks like he’s finally delivering on the promise he showed when he was NL Rookie of the Month in April 2017.

Yusei Kikuchi, SP, Seattle Mariners (ESPN: 15 per cent; CBS: 36 per cent): After May last season, Kikuchi was a real weak starting option as the Mariners fell apart after looking so good to begin the campaign. This season, his control was suspect early on, but there are some signs of promise as his velocity has increased significantly (up 3 mph from last season). He was touched up on Friday, so Kikuchi has now gone 22 outings without back-to-back quality starts, but given what we’ve seen early on, it may be time to jump back on his train.

Dylan Moore, 2B/3B/SS/OF, Seattle Mariners (ESPN: 14.9 per cent; CBS: 9 per cent): Moore enjoyed back-to-back multi-hit efforts this week before a stinker on Thursday. While he showed an impressive walk rate as a rookie last season, he has yet to draw a free pass through his first 34 plate appearances this year, but this more aggressive approach seems to be working. Moore’s emergence is a huge surprise, so it’s tough to say it’s sustainable, but you may as well give him a shot while he’s ripping it.

Jose Quintana, SP, Chicago Cubs (ESPN: 28.1 per cent; CBS: 49 per cent): Quintana (thumb) could be ready to return as soon as next week after throwing a 35-pitch simulated game on Thursday. Note that it’s not certain he’ll get a rotation spot, and he’s a risk given his fading performance in recent years, but this is probably your last shot to add him.

Jason Kipnis, 2B, Chicago Cubs (ESPN: 2.9 per cent; CBS: 7 per cent): Okay, so Kipnis will be hard pressed to steal PT away from Nico Hoerner, but the veteran is mashing in his limited chances, making him a nice NL-only league option. Kipnis can still produce.

Brad Keller, SP, Kansas City Royals (ESPN: 2.9 per cent; CBS: 18 per cent): Covid schmovid! Keller came off the IL on Thursday and looked superb with seven Ks over five shutout frames. He’s no stranger to fast starts; let’s see if this one can be sustained.

English rockers The Kinks got their start way back in 1964, and while they took a break of 20+ years, they are still at it today. Main songwriter Ray Davies really started to hit his stride in 1965 with the band’s single “A Well Respected Man.”

By RotoRob
Tags: Maurcio Dubon
This entry was posted on Saturday, August 8th, 2020 at 10:50 am and is filed under BASEBALL, RotoRob, The Wire Troll. You can follow any responses to this entry through the RSS 2.0 feed. Both comments and pings are currently closed.