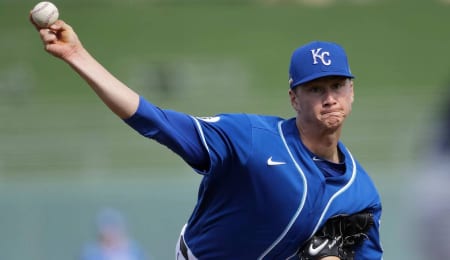 Brady Singer is on the cusp of greatness. (AP Photo/Charlie Riedel)

Welcome back to another week of Fantasy baseball. It’s already mid-September, and there’s just a couple of weeks remaining in the season. However, there’s still time to find a hidden gem on the wire that will help you secure victory.

This week, the Giants sent Pablo Sandoval packing as he failed to hit his weight (of course, if he did, he’d break a few records); Mookie Betts‘ Fantasy value got a boost as he may qualify at second base now depending on your league rules; and James Paxton (flexor tendon) suffered a setback in his recovery, likely ending his season.

Brady Singer, SP, Kansas City Royals (ESPN: 10.1 per cent; CBS: 29 per cent): Earlier this season, home runs were a bit of an issue for Singer, but he hasn’t served one up in either of his last two starts, including a brilliant effort on Thursday (eight shutout innings of one-hit ball with two walks and eight Ks). The rookie actually went 7 2/3 IP before he gave up a hit to the Indians as KC’s 2018 first rounder out of Florida gave us an indication of just how good he can be. Singer dodged some bullets in this one (see video below), but was generally fantastic. His ERA had ballooned over 5.50 with some rough outings over the last month, but this effort takes him down to a more serviceable 4.66 mark, and — ideally — positions him for a strong finish. The righty was a non-roster invitee this spring, but to its credit Kansas City has given its young pitchers a legitimate shot this season, and he’s generally rewarded the team’s confidence. Having just turned 24 last month, Singer’s best offering is his heater, but he also sports a solid slider and changeup in his arsenal. If he hadn’t struggled early in his junior season, he could have easily gone No. 1 overall two years ago.

Reynaldo Lopez, SP, Chicago White Sox (ESPN: 25.4 per cent; CBS: 14 per cent): A graduate of our 2017 Top Prospects Rankings, Lopez looked like a rising star in 2018 before hitting some tough times last season (despite 10 wins). This year has been a virtual writeoff with injuries and ineffectiveness keeping him winless through four forgettable starts. Banished to the alternate training site just over a week ago, Lopez will get another crack at the White Sox rotation thanks to Dallas Keuchel (back) landing on the IL. Now, major Fantasy value is probably a long shot for Lopez at this stage, but given the talent he’s flashed in the past and the promising reports from the alternate camp, he intrigues us.

Adam Duvall, OF, Atlanta Braves (ESPN: 44.3 per cent; CBS: 43 per cent): Heading into the season, Duvall seemed like an afterthought in the crowded Braves outfield. However, thanks to injuries and a variety of other factors, he has seen regular PT and has really shone — especially lately. Duvall started slowly, was decent in August, and is now absolutely scorching in September, putting up a pair of three-dinger explosions in just over a week. Atlanta faces some low-quality hurlers next week, making him a very enticing add to see if he can keep the party going. We always knew Duvall had power, but he’s added a career-best .271 BA to the mix this year, so it’s time to pay attention in all formats. You cannot ignore a player with a 135 OPS+.

Canadian hard rock band Santers formed in 1979 and is still at it today. In 1982, it released its second album, Racing Time, which included the tune “Road to Morocco.” We were fortunate enough to see Santers as part of United Way benefit concert at Maple Leaf Gardens that also included Toronto, Teenage Head and Kim Mitchell (making his debut as a solo artist). The ticket price was $5. Yup, we’re old.

By RotoRob
This entry was posted on Saturday, September 12th, 2020 at 9:55 am and is filed under BASEBALL, RotoRob, The Wire Troll. You can follow any responses to this entry through the RSS 2.0 feed. Both comments and pings are currently closed.