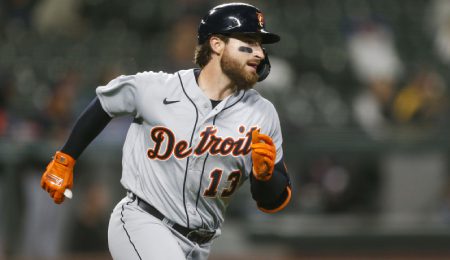 The 2021 Fantasy baseball season wraps up shortly, so here’s hoping you’re just finishing up a fantastic campaign and that our waiver wire recommendations helped you earn that success. This year, we got back to a normal baseball schedule, but the delays in the start of both the NHL and NBA seasons (and thereby extending well into the spring) made for a strange first couple of months for the sport.

Naturally, we had plenty of misses along the way, and because of the weekly nature of our column (and even less often to begin this particular season because of hockey and basketball coverage) it means that some hot free agents get scooped up days before we can tout them. But the fact is that if you managed to wind up with, say, three or four of these guys on your team, you were probably a pretty happy camper this season.

Without further ado, we present the 2021 MLB Wire Troll All-Star Team. Note that we only offered up one catcher worthy of recognition this season, but the rest of the positions are pretty well represented.

Dates in parentheses represent when we first recommended them.

Eric Haase, C/OF, Detroit Tigers (Week 13): Haase has more or less become a full-timer this year, spending plenty of time behind the plate (where he’s learned to handle his staff better) and also qualifying in the outfield in many formats. He really stepped up his extra-base pop (see video below for a taste), and enjoyed a very productive season while also improving his hit tool. Dynasty owners should note that Haase still has plenty of flaws in his game, so it wouldn’t surprise us if this is as good as it ever gets.

Frank Schwindel, Chicago Cubs (Week 19): How often does the waiver wire pick of the year not show up until very late in the season? Despite not being a factor until early August, Schwindel quickly became a must-own asset thanks to his seemingly “daily jogs.”

Frank Schwindel gets his daily jog in. pic.twitter.com/Xctq6PW6vF

His whiff rate is up a smidge, but is still excellent for someone with his power. Pitchers have been going at Schwindel with more — and harder — sliders, but it’s clearly not working so far.

Jazz Chisholm, 2B/SS, Miami Marlins (Week One): Compared to his first taste of the bigs, Chisholm took a step back from a fielding perspective this season, but he showed much more power than expected in his true rookie season. As a result, he didn’t see as many fastballs this year as pitchers employed more sinkers, changeups and sliders to attack him.

Willy Adames, Milwaukee Brewers (Week 10): Adames was really struggled for the Rays before they dealt him to Milwaukee in late-May. Since then, all he’s done is hit .294 with 17 home runs. Adames is currently out, but expected back on Monday to resume his fine campaign. Pitchers are using softer cutters against him, and that’s not working as he’s hitting this pitch much better this season.

Josh Harrison, 2B/3B/OF, Washington Nationals/Oakland Athletics (Week One): Harrison played exclusively at second base this year, but he qualifies at third, so we’re slotting him here. We recommended him at the beginning of the season, and he got tons of PT for the Nats before being moved at the deadline to Oakland, where he’s been very productive, quickly becoming a big part of the offense. All told, Harrison has already seen his most action since 2017, and should blow past that. He’s hitting sliders better than ever, and that’s been a big reason for his fine campaign.

Hunter Renfroe, Boston Red Sox (Week 12): Renfroe has spent most of his time batting sixth this season, but his fine play has recently seen him moved up to the two hole. And make no mistake, this has been his finest full season yet as his extra-base power has recovered somewhat, leading to his highest slugging percentage since 2018 — while he’s posting career bests in BA and OBP. Renfroe’s had more trouble with cutters and changeups this season, but has shown improvements against almost every other type of pitch.

Robbie Grossman, Detroit Tigers (Week Seven): Grossman’s walk rate bounced back big time this season, and while he couldn’t sustain the extra-base power he showed in 2020, he still enjoyed the most productive campaign of his career. The key? He never hit cutters and curves as well as he has in 2021.

Akil Baddoo, Detroit Tigers (Week 13): If you needed outfield help this year, there’s a good chance you looked to Motown for the answer. Baddoo has enjoyed a fine rookie season, putting up nice counting cat numbers, showing solid extra-base pop and a decent hit tool. He’s displayed better than average ability to not swing at stuff outside the strike zone, but has been slightly below average in terms of making contact when he swings at pitches inside the zone.

Cole Irvin, SP/RP, Oakland Athletics (Week Four): Irving turned in another solid start on Friday as he reached double-digit wins for the first time in his career. His record isn’t great, but his emergence has been a great Fantasy story. Batters are taking more often against him this year, yet his contact rate has recovered nicely.

Cal Quantrill, SP/RP, Cleveland Indians (Week 19): It’s been a tough year in Cleveland, but the emergence of Quantrill has definitely provided more hope for the future. For a dude that didn’t enter the rotation until the end of May, it’s pretty impressive that he wound up being one of the top starters off the wire. Quantrill set a career high in starts and he got some great results despite weaker command this season. He even showed improvements as a fielder, while doing a better job shutting down the running game.

Chris Flexen, SP/RP, Seattle Mariners (Week 13): Flexen has enjoyed a career year, really stepping it up since the start of August. He’s not much of a strikeout pitcher, but his control has been vastly better this season.

Luis Gil, New York Yankees (Week 12): Gil, who will make his sixth start of the season on Saturday, has looked pretty sharp so far in his rookie season. He’s undefeated despite his shaky control, so has produced a positive value in his short time in the bigs. If Gil can rein in those walks, look out!

Ranger Suarez, RP/SP, Philadelphia Phillies (Week 16): Suarez got moved into the rotation at the beginning of August, but has mostly pitched out of the pen, hence his inclusion on our list as a reliever. We hope you didn’t sell high on his dude, as he’s been a life saver for many Fantasy owners. Suarez has put together a nice record with an eye-popping ERA and has restricted long balls like never before. He’s also apparently a real fan fave.

Paul Sewald, Seattle Mariners (Week 14): Sewald has been so dependable at shutting down opposing rallies this season. He’s compiled a fantastic record with career bests pretty much across the board, including a sweet ERA. Sewald shows great command and has emerged as a very strong reliever this season.

Jonathan Loaisiga, RP/SP, New York Yankees (Week Seven): Loaisiga is making progress with a shoulder woe that knocked him out a couple of weeks ago, but whether he returns or not, he’s been lights out this season. Used exclusively as a reliever for the first time, he enjoyed by far his best year, racking up a WAR of 3.0 with a sweet ERA, improved control and a very fine hit rate. Loaisiga even bagged some saves to go along with all those holds. This short Nicaraguan righty has been a revelation for the Yanks.

English rock band Babe Ruth hails from Hatfield, Hertfordshire. In 1974, it released Amar Caballero and from that effort comes the medley “Amar Caballero (Sin Ton Ni Son),” featuring the mellotron work of Alan Shacklock, who later on performed with The Alarm.

By RotoRob
This entry was posted on Saturday, September 18th, 2021 at 6:00 pm and is filed under BASEBALL, RotoRob, The Wire Troll. You can follow any responses to this entry through the RSS 2.0 feed. Both comments and pings are currently closed.