The Wire Troll: Ryan Rua Running With Shot For Rangers 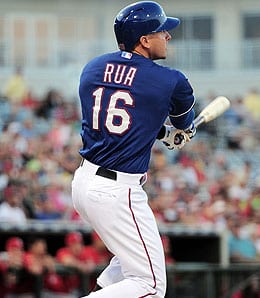 Ryan Rua is getting an extended look for the Rangers. (Lonestarball.com)

Welcome back to another week of Fantasy baseball. Well, April is nearly in the rear-view mirror now, so we’re almost at that time of year where you know whether your Fantasy team is a contender or a pretender. Use the wire to help ensure it’s the former.

This week, the Nats lost Adam Eaton for the season thanks to a torn ACL; similar, Shelby Miller will undergo Tommy John surgery and miss the remainder of the year; and Noah Syndergaard was scratched from his start Thursday because of biceps and shoulder discomfort, and then refused to get an MRI. Stay tuned!

Ryan Rua, OF, Texas Rangers (ESPN: 0.7 per cent; CBS: 2 per cent): Jurickson Profar got his shot, but struggled, so Texas has turned to Rua to man left field, and Manager Jeff Banister says Rua will get an extended look. No, Rua wasn’t exactly tearing it up early on either, but since moving into the starting lineup, he’s responded. He got a hit Tuesday, two more Wednesday (including a grand slam — see video below — and five RBI) and then recorded a double on Friday. A former top 10 prospect for the Rangers, Rua struggled to hold the left field job in 2015, but he saw a lot more action last year. If he keeps hitting and sticks in the lineup, he could prove to be a surprising asset this season, so this situation bears watching.

Henry Owens, SP, Boston Red Sox (ESPN: 0.2 per cent; CBS: 3 per cent): So, Boston’s rotation will be so much better this year, right? Um, ya… about that. BoSox starters continue to mostly scuffle, ranking 20th in ERA, so perhaps it’s time for some replacement options? Owens didn’t get much of a shot in the bigs last year, mostly because he was rocked in his few starts. But he’s racking up some dominant strikeout rates at Triple-A right now, suggesting that Boston’s compensation pick from 2011 is ready for another look in the Show. We’re predicting Owens could stick if he gets the chance.

Justin Wilson, RP, Detroit Tigers (ESPN: 15.9 per cent; CBS: 18 per cent): Wilson had tossed 9 2/3 IP without giving up a hit (while fanning 15) until Saturday when he was touched up for two hits, a walk and a solo homer by Melky Cabrera in suffering his first loss. Still, he whiffed another two batters and is racking up the holds while closer Francisco Rodriguez looks like a shell of himself. Could Wilson be earning saves in Detroit at some point? It’s worth thinking about.

Miguel Gonzalez, SP, Chicago White Sox (ESPN: 40.4 per cent; CBS: 39 per cent): One of the keys behind the White Sox’s surprisingly good start has been Gonzalez, who has looked shaky in one outing, solid in another, and downright dominant in his last two. His strikeout rate is up, he has yet to lose, and he’s sitting with a sparkling 2.00 ERA through four starts, with an outing in Detroit scheduled for Sunday afternoon. The big difference for Gonzalez recently has been getting strike one. His aggressive approach of attacking the strike zone is working right now. We’ll see if the league adjusts to his new tactic, but for now, you need to pick Gonzalez up in all formats.

Trevor Rosenthal, RP, St. Louis Cardinals (ESPN: 9.9 per cent; CBS: 22 per cent): Seeking another bullpen arm? Rosenthal looks very healthy this season as his velocity is up (only Aroldis Chapman is throwing harder), and you’ve got to love that control so far. With closer Seung-hwan Oh off to a rough start and Rosenthal bagging saves in his two of his last four appearances, this is a situation you need to watch closely if you’re trolling for saves.

Nick Pivetta, SP, Philadelphia Phillies (ESPN: 1.4 per cent; CBS: 3 per cent): With Aaron Nola (back) still hurting, Pivetta has been recalled to take the bump against the Dodgers on Sunday. Pivetta, a tall Canadian righty, was Washington’s fourth round pick in 2013, and sent to Philly in 2015 for Jonathan Papelbon. Pivetta was tougher to hit last year, pitching mostly at Double-A before five starts at Triple-A down the stretch. This year, he’s been otherworldly to begin the season at Triple-A, which is even more impressive when you consider that he usually struggles at the beginning of the season. In Pivetta’s most recent start, a week and a half ago, he whiffed a career-high 11 batters.

Derek Law, RP, San Francisco Giants (ESPN: 0.5 per cent; CBS: 2 per cent): The Giants’ undisputed eighth inning man has experienced the occasional issue this year, but has generally managed to maintain the leads he’s given. Somehow, he also ranks fifth in the league in wins, although that’s impossible to project going forward.

Rafael Bautista, OF, Washington Nationals (ESPN: 0.2 per cent; CBS: unowned): With Eaton done for the season (as we discussed in the intro), the Nats have recalled Bautista from Triple-A, where he was showing decent gap power. Will the relatively unknown Bautista emerge with value, or will Michael Taylor finally figure out how to hit big league pitching and run with this opportunity?

Jose Reyes, 3B, New York Mets (ESPN: 9.7 per cent; CBS: 31 per cent): Reyes may not have much pop anymore (although he’s spanked two dingers in the last three games), and he really struggled as the leadoff man, but he’s suddenly turning things around with hits in five straight, including three multi-hit efforts in a row in which he’s piled up five runs.

By RotoRob
Tags: Ryan Rua
This entry was posted on Sunday, April 30th, 2017 at 4:13 pm and is filed under BASEBALL, RotoRob, The Wire Troll. You can follow any responses to this entry through the RSS 2.0 feed. Both comments and pings are currently closed.