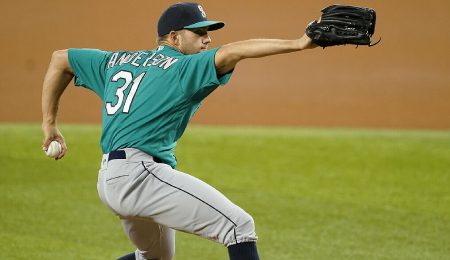 Tyler Anderson has put up lots of quality starts for the Mariners. (Tony Gutierrez/AP)

Welcome back to another week of Fantasy baseball. We’re now officially into September, and your league playoffs are likely beginning very soon. Last chance to milk the wire!

This week, Trevor Bauer‘s leave has been extended for an eighth time; Mets acting GM Zack Scott is on administrative leave after he apparently drove while drunk; and the Cubs have become the latest team to force their non-playing employees to get vaccinated.

Tyler Anderson, SP, Seattle Mariners (ESPN: 29.3 per cent; CBS: 39 per cent): Three years ago, Anderson was a candidate for the Wire Troll All-Star Team, but he barely pitched in the majors in 2019, and had control issues in 2020. This season the southpaw pitched a bit better and managed to win a few games in Pittsburgh, but since getting dealt to Seattle his season has really turned around as he’s yet to give up more than three earned runs in any of his seven starts. Hell, Anderson doesn’t even have a losing record in Em City, and that’s rare footage for him, so consider him a fine streaming option. Interestingly, he’s brought his slider back this year, a pitch that he would periodically pull out in the minors but shelved after his rookie season in 2016. The last couple of seasons, Anderson’s hit rates haven’t been bad, but he’s definitely benefited from a bit of BABIP luck, so beware long-term (especially if he has to face the fearsome Andy Ibanez — see video below).

Austin Hedges, C, Cleveland Indians (ESPN: 0.2 per cent; CBS: 1 per cent): As we expected, Hedges wound up losing steam in San Diego a couple of years ago thanks to top prospect Francisco Mejia. Hedges remained in a backup role for the Padres until getting dealt at the deadline last year to Cleveland, where he barely played down the stretch. This season, however, he’s had a more prominent role for the Tribe and is now the No. 1 man with Wilson Ramos done for the season. Hedges is actually hitting better since the All-Star break, but honestly, this is just a pick for those desperate for a healthy catcher in a deep AL-only league. We’ll give him this: he’s having the best baserunning season of his career.

Jonathan Arauz, 2B, Boston Red Sox (ESPN: 0.1 per cent; CBS: unowned): Arauz is really only an option in very deep AL-only leagues, but right now he’s getting a chance to play shortstop every day with Xander Bogaerts on the COVID list. And look at that! Arauz went yard on Friday to snap his skid, and he’s now scored three runs over the last two games after batting just .115 in August. For a middle infielder, he offers almost no speed, but at least he’s hitting the ball hard more often this season.

Joe Panik, 2B/3B/SS, Miami Marlins (ESPN: 0.4 per cent; CBS: 1 per cent): With Brian Anderson on the IL with a shoulder injury and probably done for the season, Panik will see plenty of time at third base down the stretch (with some Isan Diaz mixed in). Panik is no one’s idea of a great solution, but if he’s playing that much he has some value in deep NL-only leagues. He was released by the Giants late in the 2019 season, but did well for the Mets down the stretch that year. Last year Panik enjoyed a great walk rate in Toronto, and hit respectably to begin this season before getting traded to the Fish. In Miami, he hasn’t been very productive and hasn’t come close to his preseason projections for the year, but has a chance to do something now.

American musician Edgar Winter has been rocking since 1969. In 1972, he released his third album — and first as the Edgar Winter Group — entitled They Only Come Out at Night. From this effort comes one of his signature pieces, the classic instrumental hit “Frankenstein.”

By RotoRob
This entry was posted on Saturday, September 4th, 2021 at 1:02 pm and is filed under BASEBALL, RotoRob, The Wire Troll. You can follow any responses to this entry through the RSS 2.0 feed. Both comments and pings are currently closed.