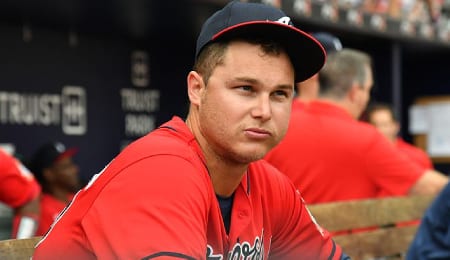 Welcome back to another week of Fantasy baseball. With the All-Star break done, we are now officially into the season’s second half, so keep your finger on the pulse of the waiver wire, people!

This week, the Yankees have a Covid-19 outbreak on their hands, with Aaron Judge among the ones that tested positive; the Braves added some power to their outfield by acquiring Joc Pederson from the Cubs (see below for more about this); and the 10-game suspension of Hector Santiago for sticky stuff has been upheld.

Joc Pederson, OF, Atlanta Braves (ESPN: 48.4 per cent; CBS: 40 per cent): Pederson really scuffled last season, and becoming a dad didn’t help matters. The Dodgers let him walk as a free agent, so he was signed by the Cubs, for whom he’s bounced back somewhat, putting up better counting cat numbers at the very least. But now Pederson is on the move again, getting traded to Atlanta, which has some serious holes in its outfield with Ronald Acuna Jr. done for the season, and Marcell Ozuna‘s immediate future up in the air. Pederson will benefit by going from one of the worst hitting home parks to one of the best, and he’s already been playing better lately with multi-hit efforts in three of the last four games after a slow start to July. No, he’s never going to hit for a high BA, but at least the Braves are making an effort to stay afloat in the NL East. Pederson does offer some upside given that his OPS against righties this season is about 150 points lower than usual and that his 2021 ZIPS projection had him topping 20 homers (see video below for a taste of his power) while flirting with an 800 OPS. Can he finally shake the perception of being a mere platoon player and put together a big second half for the Braves? It might be worth grabbing Pederson to find out.

Henry Davis, C, Pittsburgh Pirates (ESPN: NA; CBS: NA): For those of you in dynasty formats that find yourself out of the running after the first half, it’s time to look to the future. Enter Davis, the first overall pick in last weekend’s MLB Draft and the centrepiece of what was a superb draft by the Pirates. The 21-year-old Louisville product was considered the top college player in this year’s draft. He’s known for his arm, but isn’t the greatest runner. While few expected Davis to go No. 1 overall, he comes from a program that’s churned out some great catchers in recent years, such as the Dodgers’ Will Smith. Here’s a bit more about Davis.

Heath Hembree, RP, Cincinnati Reds (ESPN: 18.3 per cent; CBS: 32 per cent): It’s been several years since Hembree last popped up on the Fantasy radar, but right now, he’s been just about the only dependable arm in the Cincy bullpen thanks to a combination of ineffectiveness and injuries. He’s hurled shutout ball in seven of his last eight appearances, bagging a win and five saves along the way. Last month proved horrific for Hembree, but he’s bounced back big time in July, while racking up a goodly amount of Ks. His overall ERA has been skewed by a lousy June, but it’s still his best showing since 2019, and he’s managed to triple the number of saves he had accumulated over his first eight MLB seasons. Hembree has never been much a groundball pitcher, but this season he’s trending more into a flyball pitcher than ever, and it seems to be working for him.

Wily Peralta, SP/RP, Detroit Tigers (ESPN: 25.4 per cent; CBS: 26 per cent): It’s been over five years since Peralta was even a top 135 starting pitcher, but suddenly he’s enjoying a renaissance in Detroit. He’s really excelling through five starts, however, the metrics suggest he’s been extremely fortunate, so pick him up, but beware of the bubble bursting. Still, with two starts on deck next week, Peralta could be worth a shot.

Ranger Suarez, RP, Philadelphia Phillies (ESPN: 17.9 per cent; CBS: 30 per cent): Suarez has reduced his barrel percentage every season, and now finds himself earning saves for the Phillies. Obviously, his ERA is unsustainable, but that doesn’t mean he’s not worth picking up if you need bullpen help.

Matt Moore, SP/RP, Philadelphia Phillies (ESPN: 0.8 per cent; CBS: 6 per cent): Despite reduced velocity, Moore is going to his fastball more often this year and the results have not been great. However, he’s looked better over his last four starts, culminating in Friday’s showing in which he fanned nine over 4 1/3 IP and pounded the strike zone (throwing first pitch strikes to 16 of 19 batters he faced). As we speculated nearly two years ago, perhaps he has another comeback left.

Alex Cobb, SP, Los Angeles Angels (ESPN: 31.1 per cent; CBS: 39 per cent): Last month, we suggested that Cobb might be a replacement option for Max Scherzer owners. Now, we’re back to recommend Cobb again. He’s reduced his reliance on his sinker this season, bringing his fastball back into play a bit, and it’s worked, as his command has bounced back. Cobb’s looked sharp in three of his last four starts, so give him some consideration.

Trey Amburgey, OF, New York Yankees (ESPN: 0.8 per cent; CBS: 1 per cent): Right-handed hitting Amburgey is a short-term option in deep AL-only leagues after being recalled and taking over RF with Judge on the Covid list. As a left-handed bat, Tyler Wade is likely to factor in here as well.

By RotoRob
This entry was posted on Saturday, July 17th, 2021 at 11:38 am and is filed under BASEBALL, RotoRob, The Wire Troll. You can follow any responses to this entry through the RSS 2.0 feed. Both comments and pings are currently closed.