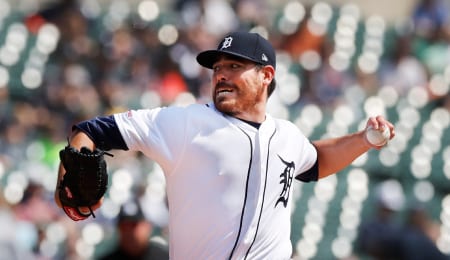 Just over two years ago, we wrote about the disintegration of Matt Moore, yet he’s still hanging around in the bigs.

In retrospect, the Giants must regret trading for him at the 2016 deadline. They gave up Matt Duffy to land Moore and since then, Duffy has posted a WAR of 2.5 for the Rays; Moore managed 0.6 in his season and a half in San Francisco. This is yet another example of how Tampa Bay competes with a shoestring budget

Sure, his FIP suggested he was unlucky, but at 5.25, it wasn’t exactly screaming “hey, I’m actually good” either. To top it off, Moore’s command worsened.

After the season, he became a free agent, signing a one-year contract with the Tigers, who actually went out and inked a few veterans this winter. Despite an inconsistent spring (see video below), Moore emerged from camp as the No. 5 starter.

Shockingly, he got off to an amazing start, pitching shutout ball in each of his first two starts and looking damn good doing so (10 IP, three hits, one walk, nine strikeouts).

Then, not so shockingly, Moore got hurt, suffering a knee injury that cost him the remainder of the season, part of a wave of injuries to the Tiger rotation that certainly helped facilitate such as an awful season in Detroit.

So what are we to make of two solid starts? Was this the start of a legitimate comeback or simply an aberration?

Hell, if Moore could have somehow maintained his early pace, he would have been a top 10 starter. But we’re pretty damn sure that he isn’t suddenly that good. For what it’s worth, in his season debut, Moore’s velocity was up from what it was at the end of 2018, but it dropped in his second outing before he had to come out with the knee injury.

After all, in looking at similar players on Baseball-Reference, we see that Moore compares quite favourably to Allen Watson, a first round pick of the Cardinals in 1991 who wound up winning 51 games over an eight-year career. Of course, Watson’s best season was in 1999 when he pitched exclusively out of the bullpen. So that’s not exactly the most promising portent for what will become of Moore.

Moore will be an unrestricted free agent again this fall, and it will be fascinating to see if anyone offers him a major league contract based on how he teased us this year. More fascinating yet will be seeing if he has yet another comeback in his left arm. Hell, he’s still only 30 years old.

So who knows? Perhaps Moore still has a bit of Fantasy value left in the tank.

We’ll be paying attention this winter to see if and where he signs, and how things look for him at Spring Training 2020.

Disco band Cloud One churned out a couple of pretty groovy albums in the mid- to late-seventies. From its first album, 1976’s Atmosphere Strut comes “Charleston Hopscotch,” co-written by three-time ASCAP Songwriter of the Year, Patrick Adams (who arranged Michael Jackson‘s “Beat it”).

Now it’s your turn. Let us know in the comments below how you think Matt Moore will fare in 2020.

By RotoRob
Tags: Matt Moore, San Francisco Giants
This entry was posted on Thursday, September 26th, 2019 at 2:54 pm and is filed under BASEBALL, Player profile, RotoRob. You can follow any responses to this entry through the RSS 2.0 feed. Both comments and pings are currently closed.