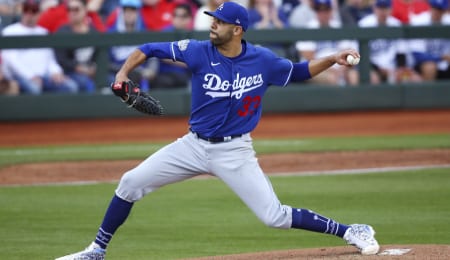 David Price limited damage in his return to the rotation. (AP)

Welcome back to another week of Fantasy baseball. We’re into mid-July and pretty much 55 per cent of the way through the 2021 season. Mine the wire!

This week, the Dodgers cancelled Trevor Bauer bobblehead night, which was scheduled for August 19; Adam Eaton was DFAed by the White Sox; and Eddie Rosario landed on the IL with an abdominal strain.

David Price, RP/SP, Los Angeles Dodgers (ESPN: 19.9 per cent; CBS: 21 per cent): Can you believe it’s been seven years since Price was dealt away from Tampa Bay? Now on his fourth team since that trade, he has mostly been pitching in relief for the Dodgers, but that changed Friday given: (a) the ongoing Bauer investigation; and (b) Clayton Kershaw‘s forearm issues. Price has twice been added as a gun for hire in a playoff chase; perhaps moving to the rotation for L.A. will give him a bigger opportunity to put his stamp on another pennant race. He’s looked sharp lately, hurling three straight scoreless outings (covering three innings) in relief, and certainly held his own in Friday’s start with three shutout frames (despite some battles), but has generally been inconsistent so far this season. Still, Price has a nice record this season despite some command regression. He has managed to lower his xERA to its best since 2016, but has already been torched for a harder hit ball than he gave up in all of 2019 when he last pitched (recall that Price opted out of the 2020 season). One caveat: we expect a tiny bit of performance regression from Price as a starter. Oh, and one other thing: keep this dude away from the virtual world (see video below).

American funk band Mandrill got its start in 1962, and other than a 10-year gap in the ’80s, has remained active since. In 1973, the band released its fourth album, Just Outside of Town, featuring the classic “Fat City Strut.”

By RotoRob
This entry was posted on Saturday, July 10th, 2021 at 10:58 am and is filed under BASEBALL, RotoRob, The Wire Troll. You can follow any responses to this entry through the RSS 2.0 feed. Both comments and pings are currently closed.