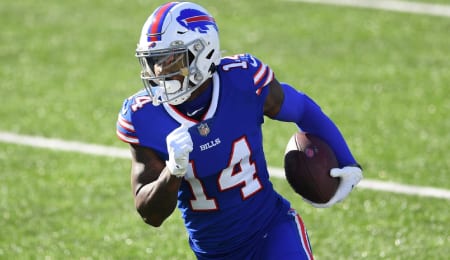 Welcome back to the 2021 RotoRob Fantasy Football Kit. It’s time for another cheat sheet as we check out the top 20 wide receivers for the 2021 Fantasy football season.

Last season was a special one for quarterbacks as four teams scored over 55 touchdowns. In league history, there has never been more than a single team accomplish this feat in any given season, so receivers were naturally inflated and likely to experience regression as a class.

1. Tyreek Hill, Kansas City Chiefs (4): This offseason, the Chiefs (a) retooled their O-line; (b) shipped out Sammy Watkins; and (c) returned a healthy Patrick Mahomes. We anticipate a lot more YAC-friendly touches for Hill in the short area of the field.

2. Stefon Diggs, Buffalo Bills (NR): A true alpha wide receiver with savant-like route running, Diggs is primed for another top-three performance in his second year with Josh Allen as part of Buffalo’s pass-happy offense. Hell, Diggs is even an accomplished motivational speaker (albeit, with colourful language… see video below).

3. Calvin Ridley, Atlanta Falcons (12): In the seven games Julio Jones missed last season, Ridley racked up 41 receptions on 68 targets for 699 yards and one touchdown. That’s WR1 material, and now Jones is gone. Even with Kyle Pitts aboard, Ridley has an immense target ceiling as some even think he could lead the lead in receiving.

4. DeAndre Hopkins, Arizona Cardinals (9): The addition of A.J. Green benefits All-Pro Hopkins, allowing him to mix up his route tree. The Arizona offense is once again poised to funnel through the dynamic duo of Kyler Murray and Hopkins.

5. Davante Adams, Green Bay Packers (2): Here is some context: in the year after Brett Favre moved on from Green Bay, Aaron Rodgers supported two 1,000-yard receivers (Donald Driver and Greg Jennings). Operating under the assumption that Rodgers is gone this year (as we have been all offseason), we question Jordan Love‘s efficiency — especially in the red zone where Adams made his money (18 touchdowns), but there is no doubts about who will be getting the lion’s share of targets.

6. Keenan Allen, Los Angeles Chargers (NR): The organization made huge O-line upgrades to “prioritize keeping Justin Herbert upright,” according to HC Brandon Staley. We expect the Chargers to compete as a top five offense, making Allen one of the best values for premium Fantasy options.

7. Michael Thomas, New Orleans Saints (1): Losing Drew Brees to retirement and the likely shift from the entrenched Saint offense will work to Thomas’ detriment. We expect New Orleans’ game script to be drastically different this year, throwing a lot more to catch up in points. But with defenses keying on him, Thomas isn’t likely to be the PPR machine he was two years ago.

8. A.J. Brown, Tennessee Titans (18): The addition of Jones may seem daunting for Brown owners, but Brown is poised haul in underneath YAC targets while Jones is more of the deep threat. Moreover, the offense is project to throw more on the heels of a bad defense.

9. DK Metcalf, Seattle Seahawks (NR): Metcalf is a physical freak of nature, finishing as WR6 in PPR leagues at just 22 years old. The departure of former OC Brian Schottenheimer will likely hurt team cohesion, but without a doubt Metcalf will be deployed again as he was in 2020.

10. Justin Jefferson, Minnesota Vikings (NR): Jefferson picked up 1,400 receiving yards in his rookie season in a hyper-concentrated offense. We expect him to command a target share of over 20 per cent in his sophomore year.

11. Terry McLaurin, Washington Redskins (NR): McLaurin now has the benefit of receiving passes from Ryan Fitzpatrick, a mint for WR1s. McLaurin should also benefit from playing alongside Curtis Samuel and Kelvin Harmon in place of the Sims brothers, who will be pushed down the depth chart.

12. Allen Robinson, Chicago Bears (7): The trade up for dual threat QB Justin Fields foreshadows a reduction in pass volume and a shift towards deep throw efficiency. Robinson is unlikely to maintain his previous target shares if Fields works his way into playing time.

13. Ja’Marr Chase, Cincinnati Bengals (NR): As a prodigious NCAA receiver now reunited with Joe Burrow, Chase is likely to fill the role for the Bengals that Amari Cooper has on the Cowboys. We expect Chase to really open eyes around the league, going over 1,000 yards on over 100 receptions with a high ADoT and around five-to-seven touchdowns.

14. Amari Cooper, Dallas Cowboys (14): In his first four games in the HC Mike McCarthy offense with Dak Prescott at the helm, Cooper had a line of 37-of-51 for 401 yards and a touchdown. The offense will be just as prolific, but we urge caution as injuries could catch up with Cooper this year.

15. Chris Godwin, Tampa Bay Buccaneers (16): Godwin put up an 81-1,072-8 line with Tom Brady, including the playoffs. We expect the team to continue playing fast, throwing more short passes, which will be a boon for Godwin. However, the re-signing of Antonio Brown could muddle Godwin’s Fantasy value.

17. D.J. Moore, Carolina Panthers (NR): We extensively discussed why Moore is likely to move back into the slot and how it positively affects his performance. Coming off 1,100+ yard seasons at age 22 and 23, Moore is poised for his best year yet, possibly even flirting with WR1-type numbers.

18. Adam Thielen, Minnesota Vikings (6): Underrated and overlooked, Thielen is once again a great value and a strong candidate to challenge WR1 status thanks to his red zone prowess (14 touchdowns). He may be getting on in years, but his red zone target share stands to benefit from Kyle Rudolph‘s departure. While Thielen is a great value at this slot, owners should be aware that his targets may be cannibalized by Jefferson.

19. Robert Woods, Los Angeles Rams (NR): Woods is a very solid and versatile receiver in a much-improved passing game environment. Stafford should rekindle Wood’s deep ball potential. Do note that while Woods is a great option, he remains the 1B to Kupp.

20. Ceedee Lamb, Dallas Cowboys (NR): McCarthy’s offenses have always been infatuated with the slot receiver and the fact that they kept feeding Lamb despite the trainwreck that was last year’s QB situation proved their dedication to Lamb. He is competing with Cooper for target supremacy, but it’s a fair question to wonder when Lamb will take over as the WR1 in Big D.

Tom Scott headed classic jazz fusion band L.A. Express, but also enjoyed a long solo career as well. Here’s another song from his 1977 album Blow It Out, which featured trumpeter Chuck Findley, who got his start with the Jimmy Dorsey Big Band. This is “You’ve Got the Feeling.”

By Lucas Chan
This entry was posted on Sunday, July 18th, 2021 at 6:27 pm and is filed under 2021 Fantasy Football Draft Kit, Cheat sheets, FOOTBALL, Lucas Chan. You can follow any responses to this entry through the RSS 2.0 feed. Both comments and pings are currently closed.