The Wire Troll: Ryan Spooner Boiling Up in Boston 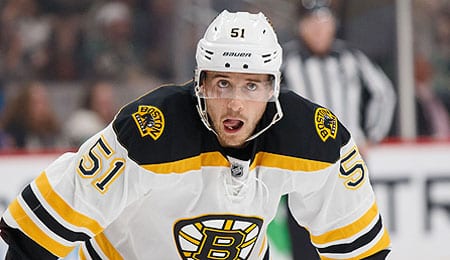 Ryan Spooner is finally healthy for the Bruins. (nbcsports.com)

Welcome back to another week of Fantasy hockey. We’re into February now, just a couple weeks shy of the trade deadline, so keep your ear to the ground and be ready to pounce on any opportunities that arise as a result of a deal.

This week, the Leafs dodged a bullet when Frederick Andersen came away unscathed after taking a skate to the head; Marc-Andre Fleury had an emotional return to Pittsburgh; and Nashville forward Filip Forsberg has been suspended for three games after a hitting Jimmy Vesey in the head.

Ryan Spooner, C, Boston Bruins (ESPN: 13.2 per cent; CBS: 24 per cent): Considering how well he’s playing lately, Spooner seems underowned. He was +2 on Wednesday, and has gone +4 over the last four games to raise his season figure to +11. Don’t look for penalty minutes from Spooner, but with 16 points in 20 games between December and January, he’s been producing for some time. He dealt with several injuries earlier this season, and that kind of kept him off the Fantasy radar, but we’re bullish on him now — especially since he’s starting to get more shots on goal compared to the first few months. Spooner is seeing consistent top six time and plenty of action on the top power play unit making him a sneaky pickup for those seeking offense down the stretch. Better yet, the playmaking abilities he showed the past couple of seasons are beginning the return (not that he can’t pot some goals, too, as you can see in the video below). We’d highly recommend grabbing Spooner while you can.

Jake Virtanen, RW, Vancouver Canucks (ESPN: 0.5 per cent; CBS: 4 per cent): This is a deep league special, but it’s worth noting that Virtanen has seen a nice boost in PT since Sam Gagner (ankle) got hurt. Virtanen hasn’t yet done anything with these extra minutes, but an increased role does represent an opportunity, and that’s worth tracking at the very least. For what it’s worth, he enjoyed his highest shooting percentage of the season last month and has had a decent bounce back effort after spending most of last season in the minors. Keep in mind, Virtanen was the sixth overall pick in 2014, but we’re going to need to see improvement in his +/- before he begins to be a real Fantasy asset. If he can remain healthy and start doing something with this opportunity, perhaps we’ll finally get a chance to see why he was picked so high. We’ll be monitoring this kid closely in the second half.

By RotoRob
Tags: Boston Bruins, Ryan Spooner
This entry was posted on Saturday, February 10th, 2018 at 2:35 pm and is filed under HOCKEY, RotoRob, The Wire Troll. You can follow any responses to this entry through the RSS 2.0 feed. Both comments and pings are currently closed.