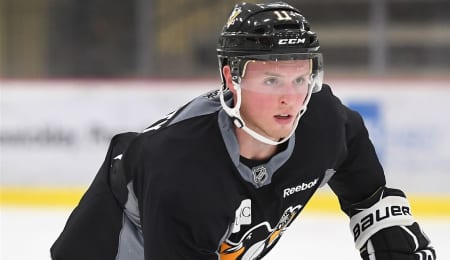 Sam Lafferty looks like the next budding star in Pittsburgh. (Peter Diana/Post-Gazette)

Welcome back to another week of Fantasy hockey. We’re just a week away from the Heritage Classic, so we’ve got a huge batch of recommendations in this installment.

This week, Toronto captain John Tavares suffered a broken finger that will sideline him at least two weeks; Vegas forward Valentin Zykov earned a 20-game suspension for testing positive for PEDs; and the Blues celebrated their Stanley Cup win with a visit to the White House to spend time with President Trump. Actually, that doesn’t sound like a celebration at all.

And now, let’s get to this week’s Fantasy hockey waiver wire picks, once again with plenty of Penguins…

Sam Lafferty, C, Pittsburgh Penguins (ESPN: 25.6 per cent; CBS: 11 per cent): Despite all the injuries for the Penguins (now Jared McCann is hurt), the team keeps rolling, and a big reason why is surprise contributions from players like Lafferty. Just recalled from the AHL, last weekend Lafferty had three goals and two assists in two games, scoring his first NHL goal as part of a three-point game (see video below). He’s already +5 through five games, and was just moved up to the second line, seeing a nice boost in PT last game. Pennsylvania native Lafferty was a big star in high school, and it seems like he’s ready to make an impact in the NHL, so grab the kid while you can.

Robin Lehner, G, Chicago Blackhawks (ESPN: 27.6 per cent; CBS: 44 per cent): Lehner made 30 saves in his season debut, and was even sharper in earning his first win on Friday. Last season, he won a career high 25 games for the Isles, and if starter Corey Crawford gets hurt again, Lehner will have a chance to provide major value. Lehner still holds the all-time Ottawa record with 53 saves in regular season game, so you know he’s capable of standing on his head from time to time. He could be one of the league’s more intriguing backups this season, with upside possibility in case of injuries.

Brandon Tanev, RW, Pittsburgh Penguins (ESPN: 11.1 per cent; CBS: 14 per cent): Tanev has been a real boon to the Pens’ special teams, killing penalties (even scoring a shorty) and drawing plenty of penalties as well. He’s recorded points in three straight games, and is well on pace to shatter his career season from 2018-19, when he put up 29 points in 80 games for the Jets. Tanev has yet to take a penalty, but his only goal was a game-winner. Check out how good this dude has been as a scoring threat on the penalty kill in recent seasons…

Brandon Tanev and the @penguins are looking for their fifth win against the Western Conference this season.

Their four wins against the West is tied with the Boston Bruins for most among all Eastern Conference teams. pic.twitter.com/xfXRIhGYdA

Jason Spezza, C, Toronto Maple Leafs (ESPN: 1.1 per cent; CBS: 4 per cent): Spezza has a chance to be a veteran leader for the Leafs, but only if he can get on the ice. Fortunately for him, he’s heading back into lineup with Tavares out, so could be a worth a look in deeper formats. Given his tremendous playmaking skills, Spezza did a good job on the power play with Dallas last season, so if he gets a chance to reprise that role with the Leafs, he could provide some value.

Jaroslav Halak, G, Boston Bruins (ESPN: 28.3 per cent; CBS: 44 per cent): Halak has been getting plenty of action with Boston mindful not to overload starter Tuukka Rask, and Halak will get his fourth start on Saturday. Halak didn’t see as much action last year as a backup, but he’s been filthy good early on, allowing just five goals through three games, good for a superb 1.69 GAA to go along with a stellar .951 save percentage.

Mikko Koskinen, G, Edmonton Oilers (ESPN: 13.5 per cent; CBS: 34 per cent): A behemoth (6’7″) of a goalie, Koskinen simply stoned the Flyers on Wednesday, saving 49 of 52 shots. In his return to the NHL last season, he won 25 games, and he’s already 3-0 this season with a sweet 2.60 GAA. He made his second straight start on Friday (and was even better) as the Oilers ride the hot hand.

Alex Stalock, G, Minnesota Wild (ESPN: 2.7 per cent; CBS: 5 per cent): Stalock has become a real leader on the Wild, but don’t blame him for the team’s struggles. Although he had a rough outing Thursday in suffering his first loss, he’s been superb to start the season, giving up just five goals through three games (two starts). He didn’t see as much action last season, but the way he’s playing now, he should get plenty this season.

Ilya Mikheyev, LW, Toronto Maple Leafs (ESPN: 25.3 per cent; CBS: 39 per cent): Mikheyev signed a one-year deal with the Leafs this season after four campaigns in the KHL and from what we gather, he has a chance to be a special player. With six points and a +5 rating already, he’s made a seamless transition to the NHL.

Adam Henrique, C, Anaheim Ducks (ESPN: 10.7 per cent; CBS: 18 per cent): Henrique has moved up to centre the Ducks’ top line, and responded with three goals and a helper over the last two, while posting a whopping +6.

Here’s another song from Bruce Springsteen, who’s had a tremendous career both as a solo act and as the front man for the E Street Band. His Essential compilation was a fine collection of his music up to the year 2003. From this comes “Living Proof,” originally released on the 1992 effort, Lucky Town.

By RotoRob
This entry was posted on Saturday, October 19th, 2019 at 11:20 am and is filed under HOCKEY, RotoRob, The Wire Troll. You can follow any responses to this entry through the RSS 2.0 feed. You can skip to the end and leave a response. Pinging is currently not allowed.