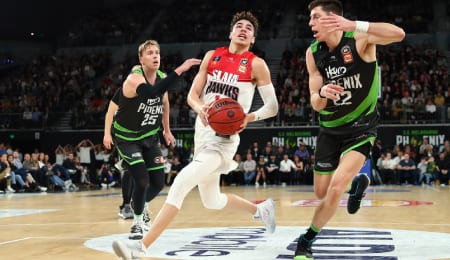 There seems to be a good feeling surrounding the Charlotte Hornets for the upcoming NBA season, but upon closer inspection, it’s not fully clear what this is based on.

Yes, the Hornets made some significant changes, but this squad really isn’t that much different (from a personnel perspective) than the team that has missed the playoffs for four straight seasons, returning players that accounted for 84 per cent of the total minutes played in 2019-20 (seventh highest in the NBA).

So, have the Hornets done enough to get back to the postseason or is another lottery pick in its future?

Draft: Last year’s first rounder, PJ Washington, certainly turned in a fine rookie campaign, but in recent years, Charlotte hasn’t exactly excelled in the draft. However, this year the team lucked out in landing the No. 3 pick in the lottery and by default may have wound up with the draft’s most talented player in Ball. Hitting it out of the park this year was a welcome sight, and the Hornets also managed to add much-needed depth at centre in Carey Jr., coming off a big season for Duke, and Richards, a mobile big from Kentucky who may profile more as a power forward in the pros.

Where We Left Off: To begin the post Kemba Walker era, the Hornets finished 23-42 last season, once again missing out on the playoffs for the fifth time in six years. However, after being limited for several seasons, they finally got some cap space, but whether they made the best use of that flexibility is up for debate (more on that later). Charlotte was in the bottom five in both boards and blocks last season, but in drafting a pair of centres, hopefully this deficiency has been addressed. Scoring was also a big issue, something that Hayward and Ball should help with (see video below).

What to Expect: This offseason brought several changes designed to address weaknesses, likely enough to put the Hornets in the race for one of the final playoff spots in the East. They scored a great coup in the draft in Ball, who could become a franchise player going forward, and added some nice positional depth with their three second round picks. Trading for and then signing Hayward is a major risk, but he gives Charlotte more offense and along with Ball could be a difference maker for this team. Still, the money spent on the Hayward contract may prove to be an albatross in time. In the end, this team improved enough to be mediocre, but certainly not great, so let’s hope this Hayward signing turns out better than a move for the sake of making a move.

Stud: Questionable contract aside, Hayward will likely become the go-to scorer on this team and should see a significant boost in Fantasy value. The former All-Star again had some injury issues last season, but when healthy, he was able to log his heaviest load of minutes since landing in Boston and he enjoyed the best shooting season of his career while becoming a more integral part of the offense. Hayward also set new personal bests in FT shooting and rebounding in a very fine comeback effort. As long as he can avoid the injury bug (which hasn’t been easy in recent years), he’s set to flourish in Charlotte.

Dud: Didn’t Terry Rozier leave Boston so he could become a starter? Now, with the arrival of uber rookie Ball, he’s likely to be pushed to reserve role again. Rozier is coming off a career season, but is unlikely to approach these numbers again, unless somehow the Hornets can divest themselves of his ill-advised contract and he winds up somewhere else with a role that gives him 30 minutes or more per game.

Sleeper: Malik Monk, if he can continue to improve his shooting, would be an ideal two-guard to play with Ball in the backcourt, leaving Graham — who needs the ball in his hands more — to possibly run the offense on the second unit. Unfortunately, Monk is currently sidelined after testing positive for Covid-19, so he may begin the season a little behind from a preparation standpoint. He showed signs of progress last season, and if he can stay healthy and get back to the three-point accuracy he displayed as a rookie, he could be a breakout candidate.

Rookie: Obviously, Ball is the key freshman here, and possibly in the entire NBA this season. Head Coach James Borrego has already lauded the rookie’s desire to soak up knowledge and improve. Given Ball’s creativity on offense and the matchup nightmare he’ll bring as a 6’7″ point guard, the Hornets are definitely going to have a new look this season.

Folk/pop/rock artist Cat Stevens has enjoyed a tremendous career. In 1975, he released his Greatest Hits, and from this effort comes “Oh Very Young,” which was originally from his 1974 album Buddha and the Chocolate Box.

By RotoRob
This entry was posted on Monday, December 7th, 2020 at 1:29 pm and is filed under BASKETBALL, RotoRob, Team report. You can follow any responses to this entry through the RSS 2.0 feed. Both comments and pings are currently closed.