The Wire Troll: Landry Shamet Shaking Things Up in L.A. 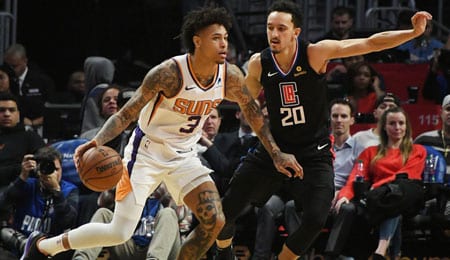 Landry Shamet (right) has taken off since getting dealt to the Clippers. (Richard Mackson-USA Today Sports)

Welcome back to another week of Fantasy basketball. We’re into March now, so this is pretty much your last chance to improve your team with some wire pickups as we head towards Fantasy playoffs. Do it!

This week, with the playoffs slipping away, the Lakers announced they will ease off on LeBron James‘s PT; Vince Carter wants to play again next season before hanging ’em up; and Portland centre Jusuf Nurkic got ejected in a heated match against OKC on Thursday.

Landry Shamet, PG/SF, Los Angeles Clippers (ESPN: 2.3 per cent; CBS: 16 per cent): The trade from Philly to the Clippers has done wonders for Shamet. He was seeing decent minutes for the 76ers, but not consistent enough to be Fantasy worthy. Now, he’s mostly starting and is showing what a force he is from downtown. Shamet’s PT is way up over the last two weeks and we’re starting to see why he was a first rounder last year. His seven three-pointers on Sunday set a new record for a Clipper rookie, and it’s clear he can really knock down open looks (see video below). Shamet has great size at the PG position (6’5″), but is not an elite athlete, which can hurt him defensively. As long as he’s starting, however, he needs to be owned.

Rodions Kurucs, SF, Brooklyn Nets (ESPN: 0.7 per cent; CBS: 10 per cent): Having recently returned to the starting lineup, Kurucs has been going off with three straight double-digit scoring efforts with at least six boards, seven combined treys and a career-high three swats on Wednesday. His touches are actually down a smidge lately, but he’s doing a much better job of getting to the line to supplement his scoring. Consider the rookie in deeper leagues.

Marvin Williams, PF, Charlotte Hornets (ESPN: 7.3 per cent; CBS: 42 per cent): Former Tar Heel Williams came through with a season-high 30 points on Friday, reminding us that every now and then, he looks like the No. 2 overall pick from 2005. The veteran has been sinking more buckets lately and is averaging a career-best two treys this season, but his turnovers have been a bit of an issue lately. It’s hard to know when Williams will go off, but he’s delivered top 35 value over the last week, and that’s worth a shout out — especially if you need a deep threat.

Luke Kennard, SG, Detroit Pistons (ESPN: 12.4 per cent; CBS: 28 per cent): Kennard scored 14 points Friday — his fourth straight game with at least that many. He’s been on fire from beyond the arc over the last week and a half and has shown good progress overall this season as he’s been given more of a chance to start now and then. Kennard seems to have settled in as the sixth man in Detroit.

Damyean Dotson, SG/SF, New York Knicks (ESPN: 3.6 per cent; CBS: 22 per cent): Heading into action Saturday, Dotson had put up three straight double-digit scoring efforts and a couple of weeks ago, he went off for 27 points (including eight treys). The sophomore is doing a better job of getting points at the line this season, and looks like a nice play down the stretch.

Alex Len, C, Atlanta Hawks (ESPN: 5.7 per cent; CBS: 27 per cent): Len has seen a huge hike in PT over the last week or so and he’s responded with three games of 11 points or more and a double-double. If you can suck up his FT shooting, he’s an interesting pickup in standard leagues and a great play in DFS right now.

Allonzo Trier, PG/SG, New York Knicks (ESPN: 6.6 per cent; CBS: 23 per cent): This rookie is starting to gain some Fantasy traction with six straight double-digit scoring games and some better rebounding work lately. Trier was a natural scorer in high school and college, and that skill is starting to manifest itself in the NBA.

Austin Rivers, SG, Houston Rockets (ESPN: 1.4 per cent; CBS: 8 per cent): James Harden dodged an injury scare on Friday, and Rivers would have been the main beneficiary if The Beard missed any time. Even so, Rivers sees enough PT and has been sinking enough buckets lately to be a deep league option.

British rocker/bluesman Eric Clapton is widely considered among the greatest guitarists ever. Since 1962, he’s been churning out the classics, either with one of his many bands or as a solo act. In 1991, he released 24 Nights, his fifth live album. From that disc comes “Running on Faith,” one of his blues classics, penned by the late Jerry Lynn Williams, who wrote a few of Clapton’s gems over the years.

By RotoRob
This entry was posted on Saturday, March 9th, 2019 at 7:23 pm and is filed under BASKETBALL, RotoRob, The Wire Troll. You can follow any responses to this entry through the RSS 2.0 feed. You can skip to the end and leave a response. Pinging is currently not allowed.