Studs and Duds: Divisional Round Edition 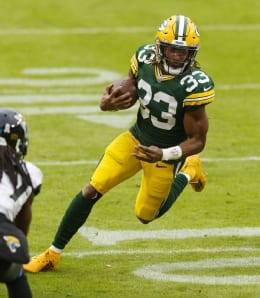 There is nothing quite like Pittsburgh losing to Cleveland in a landslide (and then moaning about it on TikTok), marking the first playoff win for the Browns since Bill Belichick was Cleveland’s head coach. And for those playing DFS, we’re back like the renegade master to give you all the hits (and misses) for the upcoming Divisional round of the playoffs.

Aaron Jones, RB, Green Bay Packers: We were bang on when we told you to sit Jones in Week 17, as — other than his TD — he was ineffective despite getting 11 totes. Well, now we’re going to switch gears and suggest you start him. Overall in 14 games this season, he rushed 201 times for 1,104 yards and nine touchdowns, adding 63 catches for 335 yards and two touchdowns through the air. Ranking fourth in DYAR (Defense-adjusted Yards above Replacement), Jones consistently gains positive yards while mixing in explosive plays, as evidenced by him finishing fifth in DVOA. The Rams are a tough challenger, ranked fourth in run defense DVOA, but it’s never easy to play in Green Bay and we expect HC Matt LaFleur to reorganize his heavy personnel to exploit Los Angeles’ effective, but smaller defense. Speaking of easy, look at how Jones bounces off virtual tackles (see video below).

Josh Allen, QB, Buffalo Bills: We suggested last week that Ryan Tannehill would be a monster in Wild Card weekend… and he was. The difference in early down EPA between Derrick Henry and Tannehill was 0.72 (three quarters of a whole point lost per play by handing the ball to Henry!). Allen and the city of Buffalo will thrive where Tennessee failed. The Bills’ organization absolutely trusts him to put on his cape and win games. We expect dominance from Allen both in the air and on the ground against an overrated defense ranked 10th and 12th, respectively, in pass and rush defense DVOA.

Tyreek Hill, WR, Kansas City Chiefs: After resting for two weeks, domestic abuse star Hill is all but guaranteed to play in the Divisional round, and we’re expecting big things. Cleveland ranks just 25th in pass defense DVOA, and simply doesn’t have any viable DBs with enough speed to cover him. With an ADoT of 13.2 yards, Hill is expected to light up the Browns’ secondary with help from Patrick Mahomes.

Tom Brady, QB, Tampa Bay Buccaneers: Let’s give credit where it’s due, Brady played a heck of a game against the second-ranked pass defense in the league. While his personal heroics shone through, let’s not forget Tampa Bay barely squeaked by with a 31-23 win over Washington and now draws the Saints. It has not been pretty for Brady against New Orleans; on 74 pass attempts over two games, he’s completed 45 passes for 448 yards with two touchdowns and five interceptions. HC Sean Payton has both Brady’s and HC Bruce Arian‘s numbers and we believe the Saints will roll on Brady once again.

Baker Mayfield, QB, Cleveland Browns: Mayfield doesn’t have to win games, he just has to not lose them. That’s exactly what happened against Pittsburgh. Cleveland will not be afforded the same luxury from Kansas City as Mayfield will need to use his arm to keep stride with the Kansas City’s offensive machine. The Chiefs, ranked 16th in pass defense DVOA, will deploy their classic bend don’t break defense. We forecast Mayfield to go over 300 yards, but with multiple turnovers.

Alvin Kamara, RB, New Orleans Saints: Saints’ fans should be worried by Kamara’s performance on Sunday. Out of practice since Christmas, he rushed 23 times for just 99 yards, tacking on two catches for 19 yards and a fumble, to boot. Kamara’s normal receiving production was pushed to Deonte Harris which he turned into 7-83-0. The lingering hamstring injury, lack of practice and the loss of the first round bye will take their toll on Kamara, making us wonder if he’ll be effective against a vaunted Buccaneers’ run defense.

Canadian surf rockers Shadowy Men on a Shadowy Planet launched in 1984, remaining active until 1996 before reforming in 2012 and continuing to perform today. In 1985, they released their first EP, Love Without Words, and from this comes “Having an Average Weekend,” which is the group’s most famous tune, mostly because it was the Kids in the Hall theme song.

By Lucas Chan
This entry was posted on Tuesday, January 12th, 2021 at 11:15 am and is filed under FOOTBALL, Lucas Chan, Studs 'n Duds. You can follow any responses to this entry through the RSS 2.0 feed. Both comments and pings are currently closed.