The Wire Troll: Cameron Johnson Could Thrive Down the Stretch 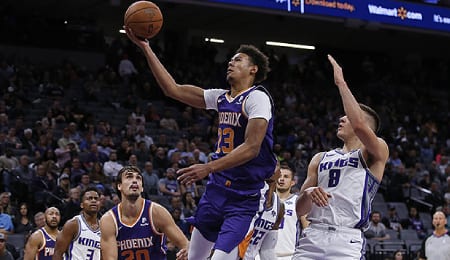 Welcome back to another week of Fantasy basketball. It’s leap day (February 29), so what more ideal time is there to milk the wire and leap over some of your opponents?

This week, Joel Embiid suffered a shoulder injury that will sideline him at least a week; after getting teched up twice and ejected on Thursday, Draymond Green is now just two technical fouls shy of an automatic suspension; for the first time since clarifying the player resting policy, the NBA has doled out a fine, charging Minnesota $25,000 for keeping a healthy D’Angelo Russell out on Sunday.

Cameron Johnson, SF, Phoenix Suns (ESPN: 1.8 per cent; CBS: 6 per cent): Just before Christmas, we recommended Johnson, and while he did see a bump in PT in December, he lost it all and more in January. However, this month has proved better for the rookie as his touches are up, and he’s likely going to benefit from a possible season-ending knee injury to Kelly Oubre Jr. (including perhaps getting some starts). Johnson’s minutes have inched up lately, and he played 27 on Wednesday, responding with 11 points, three boards and a steal. He’s only a deep league or possible DFS play at this point, but we can’t help but believe a strong finish is in the offing here. Johnson’s height and ability to space the floor could prove useful to Phoenix as the Suns play out the string and prepare for 2020-21. Just keep him away from Derrick Rose (see video below).

Cedi Osman, SF, Cleveland Cavaliers (ESPN: 7.4 per cent; CBS: 27 per cent): No, Osman hasn’t lit the world on fire, but he has been starting at the three for the Cavs, and while his offense has slowed a bit, he’s done better on the boards this month. The PT has been there, but we think he’s going to step up down the stretch as Kevin Love will likely sit one game in back-to-backs going forward and possibly get shut down altogether, opening the door for Osman to produce more.

Cam Reddish, SG/SF, Atlanta Hawks (ESPN: 15.4 per cent; CBS: 45 per cent): Reddish’s PT is heading in the right direction, and if Trae Young has to miss any time, it will only go higher so you also want to consider Reddish in DFS play. Since January, Reddish has been getting more touches, and even though he returned to the bench this week, we love what the former top five high school recruit has been doing lately as he’s emerged as Atlanta’s sixth man.

Shake Milton, PG/SG, Philadelphia 76ers (ESPN: 15.9 per cent; CBS: 21 per cent): Milton has been providing some key contributions to the Sixers lately, scoring 17 or more in three of the last four and on Thursday adding four assists, three boards, two blocks and a steal. He’s perfect from the line this month (not that he gets there that often, mind you), but most impressive is that he’s been playing at a top 30 level over the last week, so grab Milton while you can.

Harry Giles III, PF/C, Sacramento Kings (ESPN: 16.5 per cent; CBS: 27 per cent): Injuries have opened the door for Giles to finally get a real chance to show what he can do, and it’s impressive. With big expectations, he showed promise as a rookie, but had been unable to build on that this season — until recently. Grab Giles now, as he’s going to be flying off the wire this week.

Lonnie Walker IV, SG, San Antonio Spurs (ESPN: 0.8 per cent; CBS: 5 per cent): How do you top a third? How about a fourth, as in Lonnie Walker the fourth? LaMarcus Aldridge (shoulder) remains out and Walker got the most recent start and impressed with a dozen points. If Walker can get to the line more often, he will really begin to take off.

Damion Lee, SG, Golden State Warriors (ESPN: 23.9 per cent; CBS: 46 per cent): Lee began the season on a two-way deal, and on Thursday he led the Warriors in FG attempts, putting up 15 shots for the third time in just over three weeks. Despite the shit show in Golden State, this dude has been productive, making him a nice redraft and DFS option.

E’Twaun Moore, SG/SF, New Orleans Pelicans (ESPN: 0.8 per cent; CBS: 1 per cent): Moore had done next to nothing since returning from injury last month, but the former Celtic stepped up for 10 points off the bench on Friday after JJ Redick (hamstring) got hurt. If the injury is serious, Moore will be worth a look in deep formats.

Gorgui Dieng, C, Memphis Grizzlies (ESPN: 18.3 per cent; CBS: 35 per cent): Although he’s been used exclusively as a bench player since getting traded to Memphis, Dieng has seen a boost in minutes and has generally played very well.

Pau Gasol, C/PF, Portland Trail Blazers (ESPN: 0.1 per cent; CBS: 1 per cent): This is a keeper league only option as it’s clear that Gasol (foot) won’t play this season. But he hopes to compete in the Olympics this summer and return to play another NBA campaign next season.

Solomon Burke was one of the key figures that helped link R&B and soul. Here’s another track from his soundtrack to the 1972 blaxploitation movie, Cool Breeze. This is “Get Up and Do Something For Yourself,” a tune that reached No. 49 on the U.S. R&B charts.

By RotoRob
This entry was posted on Saturday, February 29th, 2020 at 3:28 pm and is filed under BASKETBALL, RotoRob, The Wire Troll. You can follow any responses to this entry through the RSS 2.0 feed. You can skip to the end and leave a response. Pinging is currently not allowed.