The Wire Troll: Naz Reid Takes the Reins in Minnesota 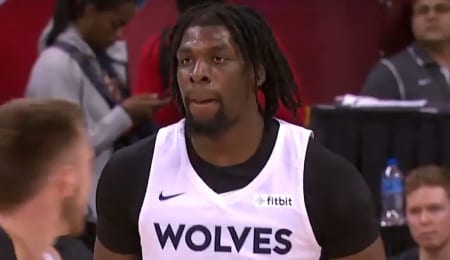 Naz Reid is getting his chance to shine. (NBA TV)

Welcome back to another week of Fantasy basketball. Given the delayed start to the season, we’re already into the 2021 portion of the 2020-21 season. Crazy, but true. So while we await the James Harden trade, let’s mine the waiver wire!

This week, the NBA announced that it will soon force its players and team staff to wear contact sensors to help avoid Covid-19 exposure; Kris Dunn (ankle) will be sidelined for another two weeks following surgery, so Cam Reddish should continue to cook; and Lauri Markkanen, already dealing with a calf woe, is now sidelined because of the NBA’s health protocol (which we assume is semantics for testing positive).

Naz Reid, C/PF, Minnesota Timberwolves (ESPN: 4.9 per cent; CBS: 42 per cent): Reid has been off the Fantasy radar so far in his career, but he’s getting his chance to shine now with Karl-Anthony Towns (wrist) expected to miss several games. Even if Reid has limited appeal in a redraft format, he makes a superb DFS play at the moment, having averaged 11 points, five boards, 1.6 assists and a combined 1.7 blocks/steals in games that KAT has missed since the beginning of 2019-20. Reid has scored double figures in each of the last three games, and his bucket count is up a smidge over his rookie season — with the upside to rise even more. On Friday, he really stepped up offensively and defensively… with a thunderous block — see video below. When he came out of LSU, Reid showed strength and a solid jump shot, plus was considered a leader. However, he wasn’t the most athletic player and didn’t necessarily have the size or defensive skill to be a starting centre in the NBA.

Cameron Johnson, SF/PF, Phoenix Suns (ESPN: 13.2 per cent; CBS: 40 per cent): In late-February, we tabbed Johnson as a player that could help for the stretch drive. It’s hard to quantify that pick as bad as the kid went off in his only game in March before a knee injury ended his season just before the pause. In the bubble, Johnson continued to excel, and so far he’s been a pleasant surprise this season, averaging 14.4 points to really help provide frontcourt scoring depth. Healthy so far, he’s been playing exclusively off the bench (thanks to the addition of Jae Crowder), but it’s a role that has not limited him in the least as he looks like he can be a primary scoring option in the second unit. Given the youngster’s upside, don’t overlook the idea that Johnson could ultimately earn the lion’s share of the minutes in this position battle.

One of our personal faves, The Brand New Heavies were instrumental in us getting big into acid jazz back in the day. The band formed in 1985 and is still at it today. In 1997, BNH released one of its biggest hits, “You Are the Universe,” which peaked at No. 4 on the U.K. R&B charts.

By RotoRob
This entry was posted on Saturday, January 2nd, 2021 at 12:15 pm and is filed under BASKETBALL, RotoRob, The Wire Troll. You can follow any responses to this entry through the RSS 2.0 feed. Both comments and pings are currently closed.