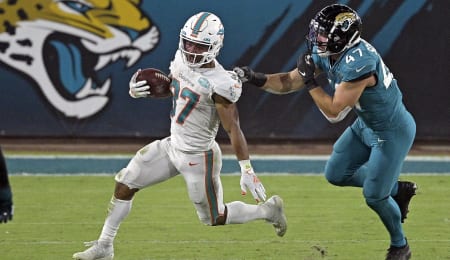 Myles Gaskin (left) is clearly the No. 1 RB for the Fins. (Phelan M. Ebenhack, AP)

Myles Gaskin, RB, Miami Dolphins: In his return after a long on-and-off IR stint, Gaskin tallied 14 carries for 87 yards on the ground, adding five receptions for 82 yards and two touchdowns in the air. He showed no rust, shaking off tackles like they were small children (see video below). Immediately assuming a 76 per cent snap rate, Gaskin will continue to be rolled out as a featured back under HC Brian Flores. Buffalo’s D is more daunting on paper than it is in reality (ranked 13th in total defense DVOA). We project positive gamescript for Gaskin regardless if Miami is trailing or not.

Russell Gage, WR, Atlanta Falcons: Since Julio Jones‘ exit in Week 13, Gage has seen seven targets per game, converting them into an average of five catches for 57 yards and 0.3 touchdowns. As a cherry on top, Gage will face the Tampa Bay Buccaneers… who he torched for 5-68-1 in Week 15. Those anticipating sitting Tyreek Hill or other Week 17 mulligans should look no further than Gage.

Cole Beasley, WR, Buffalo Bills: The last time we recommended this dude, he went off for nine receptions, 130 yards and a score. Beasley, believe it or not, is ranked third in targets from the slot. Playing 84.6 per cent of the time from this position, Beasley has seen double digit targets three of the last four weeks in matchups in which interior pass defense is weak (San Francisco, Pittsburgh and Denver) and now draws the Miami Dolphins. A classic middle-of-the-field-open defense, Miami will leak heavily to the dink and dunk from Josh Allen to Beasley.

Corey Davis, WR, Tennessee Titans: Our favourite low-round value receiver makes his fourth appearance in our column, and for good reason. After goose-egging in snowy Green Bay, he will arguably be at his cheapest in DFS and offers incredibly high upside for low cost. Ranked 29th in pass DVOA, Houston’s defense is as stiff as wet toilet paper and doesn’t have personnel to throw the kitchen sink at both A.J. Brown and Davis.

Mecole Hardman, WR, Kansas City Chiefs: The cheetah knock-off lands himself on the list because HC Andy Reid has already announced that Patrick Mahomes will sit. It is likely that both Travis Kelce and Hill will not finish (or even dress for) the game, making Chad Henne and Hardman relevant. While this all might hold, Hardman still is an unpolished product and holds his own risks and rewards, but we’re expecting more boom than bust.

JuJu Smith-Schuster, WR, Pittsburgh Steelers: The Steelers’ comeback featured Smith-Schuster catching nine balls for 96 yards and a touchdown. Although he has a positive matchup against the ailing Cleveland secondary, we argue that Ben Roethlisberger and the Steelers will get high off their win against the Colts and play the worst football of the season. If you’re betting on their must-win situation, you’re on your own.

Aaron Jones, RB, Green Bay Packers: With the playoff picture firmly in Green Bay’s control, we are warning Fantasy owners that are still playing in Week 17 to consider whether or not HC Matt LaFleur will pull Jones for A.J. Dillon in a similar fashion to Week 16. Moreover, the Bears’ defense is no slouch (fourth in rush DVOA, seventh in pass DVOA) and will be looking to play upset against their division rival.

Patrick Mahomes, QB, Tyreek Hill, WR, and Travis Kelce, TE, Kansas City Chiefs: Reid has already revealed he’s sitting Mahomes, so the risk of pulling Hill and Kelce is high. While we see Reid as the type of coach to let Kelce secure the lead on receiving yards, we don’t expect any starters to last past halftime, so Week 17 buyers beware.

Mike Davis, RB, Carolina Panthers: Take away all his touchdowns and the husk of Davis’ low-end RB2 value will show through. Despite taking the lion’s share of the backfield touches, he’s been generally ineffective both on the ground and in the air. In an already lost season, Davis gets a heavy draw against New Orleans’ fourth-ranked pass defense and second-ranked run defense in DVOA. On top of that, the Saints are fighting for the number one seed.

Kyler Murray, QB, Arizona Cardinals: Murray lit up HC Sean McVay‘s defense in their last outing, but has not looked great since. Since sustaining a lower leg injury three weeks ago, Murray’s numbers have taken a dip. Combine this with what we project to be a sludgy game with a lot of punting, and you should avoid him.

Before Cat Stevens changed his name and started making Islamic music, he churned out a hell of a lot of classics, like “Peace Train,” one of his bigger hits that made it onto his 1975 Greatest Hits collection.

By Lucas Chan
This entry was posted on Wednesday, December 30th, 2020 at 6:31 pm and is filed under FOOTBALL, Lucas Chan, Start 'em Sit 'em. You can follow any responses to this entry through the RSS 2.0 feed. Both comments and pings are currently closed.