The Wire Troll: Trevor Ariza Turns Back the Clock 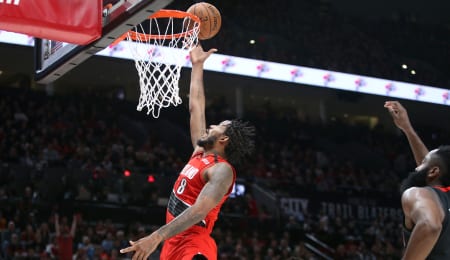 Trevor Ariza has experienced a renaissance with the Blazers. (Sean Meagher/The Oregonian)

Welcome back to another week of Fantasy basketball. We’re now officially in February, meaning there’s only about two-fifths of the season remaining. Don’t let your foot off the pedal now.

This week, news of Kobe Bryant‘s untimely death rocked the league, causing a wave of emotion and in some cases, missed games (Chris Paul missed his first game of the season Monday because he was mourning); Grayson Allen (hip) is out indefinitely, prompting the Grizz to recall Josh Jackson, the fourth overall pick in 2017; and the Cavs finally stopped the bleeding by beating Detroit on Monday night.

And now, let’s get to this week’s Fantasy basketball waiver wire picks of the week…

Trevor Ariza, SF, Portland Trail Blazers (ESPN: 12.3 per cent; CBS: 42 per cent): Ariza, who had been struggling as a bench player in Sacramento, was dealt to Portland last week and paid immediate dividends. Shifted into the starting lineup, the veteran went off for a season-high 21 points, seven boards, two steals and two assists in his Trail Blazer debut, before trailing off in his second game, yet still seeing nice minutes. Ariza’s three-point shooting has been much better this month, and as long as he keeps getting the PT he’s seen so far in Portland, he looks like a very nice pickup. He’s always been able to fill the stat sheet when healthy (which has been a bit less often in recent seasons), so he could be a second-half steal for your team. Just keep Ariza away from LeBron James‘ crossover (see video below).

Although Canadian musician Burton Cummings is best known for his work with The Guess Who, he’s had a pretty good solo career too. In 1980, he released a greatest hits package, The Best of Burton Cummings, and from this effort comes “I Will Play a Rhapsody,” originally released on 1978’s Dream of a Child.

By RotoRob
This entry was posted on Saturday, February 1st, 2020 at 1:07 pm and is filed under BASKETBALL, RotoRob, The Wire Troll. You can follow any responses to this entry through the RSS 2.0 feed. You can skip to the end and leave a response. Pinging is currently not allowed.