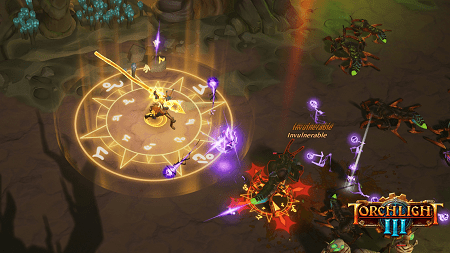 While console gamers didn’t get to experience Torchlight II until last autumn, the game originally launched all the way back in 2012. That’s why some may be feeling a sense of deja vu with the release of Torchlight III across PC and consoles, but rest assured it’s a new game. In fact, it’s been several games during its development lifecycle, and the remnants of some of those earlier iterations can be spotted in the final product.

Simplicity is the name of the game in Torchlight III as most fights involve wading into monsters (if you’re a melee class) or staying away from them (if you’re a ranged class) and holding down the basic attack button. As you level up you’ll unlock new abilities that you can mix in as well, all of which run on some version of a cooldown timer. The left trigger acts as a modifier to switch the set of abilities you’re using, allowing you to actively equip up to nine skills.

A year ago, we wrote off the decision to use the right analog stick to zoom in and out as a relic of a game that took nearly a decade to reach consoles. Since it remains the same here, however, it’s clearly an ongoing choice, and one that we don’t fully understand. Why in an action RPG in which you’re often asked to face dozens of monsters at once would you not use the right stick to aim your attacks/projectiles? The inability to attack and move simultaneously slows down combat, and it’s especially noticeable in boss fights. It feels outdated.

Like its predecessors, Torchlight III delivers a lively, colourful world that places an emphasis on whimsy over any sort of realism. Characters and monsters alike are mostly cartoonish, though even on a 70-inch television you won’t discern a lot of detail without zooming in (and you’re unlikely to do that very often because the tighter the camera is the less you’re able to see threats around you). We could’ve done with a little more variety both in terms of areas and enemies.

There isn’t a lot going on with the audio side of things as much of the game seems to exist with scarcely a hint of music. Sound effects are alright, though there were times when we had almost no idea what we were supposed to be hearing — for example, one pet’s attacks sounded like popcorn popping. The voice acting is decent.

Set a century after the events of its predecessor, Torchlight III has its world being invaded once again by the Netherim, a race of demon-like creatures that want to take over. Outside of the occasional exposition dump leading to your next mission and even more infrequent cut scenes, there’s no level of importance assigned to the story. It can be comfortably broken down to bad things are happening and it’s up to you to stop them.

With the narrative moved to the background, the gameplay and loot gathering are left to carry the load. While there’s undoubtedly a mindless charm to wading through dozens of enemies, neither the challenge nor the amount of interesting loot are as compelling as we would’ve liked. Leveling up feels like it takes too long, which becomes an issue later on when suggested levels ramp up and force you to grind, and battles take on a repetitive quality.

As such, we found our time with Torchlight III to be more enjoyable in smaller bites where its simplicity and light-hearted nature were more endearing. Longer sessions didn’t hold up as well. Boss fights and legendary enemies serve to mix things up, and their appearance is always welcome because it means your best chance at getting worthwhile loot.

There are four classes to choose from: sharpshooter, dusk mage, railmaster and forged. They represent some distinctive takes on traditional classes, particularly the last two, but there’s nothing too out of the ordinary here. Beyond selecting your class, you’ll also choose a relic (such as ice or lightning) that opens up another skill tree, along with a pet that serves as your companion — you’ll be able to find new pets as you progress, but class and relic choices are permanent.

Each time you level up you’ll gain a skill point to be applied to unlocking or upgrading a skill, and various tiers will open as you hit pre-determined levels (e.g., a tier will open up at Level Five, another at Level 10, and so on). The question then becomes whether to spread those points among many skills or invest heavily in a handful.

Why Torchlight III struggles within that framework is by making it difficult to experiment by being stingy with respec options, forcing you to either wait to use your skill points or work with builds that potentially don’t maximize your character’s potential.

Beyond the single-player campaign you can also play online with others, though you’re unable to bring your “offline character” (you’ll need to create an online-only hero). While we understand the logic behind it, it’s still frustrating to not be able to continue leveling your character with others when the campaign can be so grind heavy at times.

Torchlight III is something of a mixed bag. On one hand, it packs a lot of content, unique classes and straightforward combat into an experience that gains steam in the later stages. On the other, the enemies are often excessively spongy, loot drops aren’t as exciting as they should be and the fighting never adds much depth. If you’re interested in a simplistic ARPG, though, this checks a lot of boxes.

By HC Green
Tags: Torchlight III, Video Game Review
This entry was posted on Friday, October 30th, 2020 at 2:22 pm and is filed under Herija Green, Video Game Reviews. You can follow any responses to this entry through the RSS 2.0 feed. Both comments and pings are currently closed.