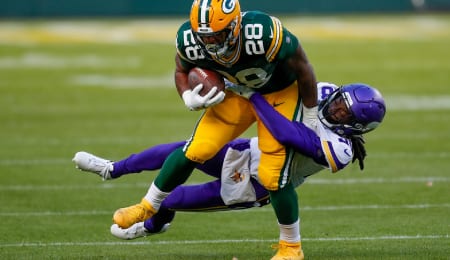 After being sidelined last week, we’re back with our roundup of all the games to help Fantasy football owners prepare for Week Nine. Note that Thursday’s matchup between Green Bay and San Francisco has a heightened chance of being postponed after Packers running backs AJ Dillon and Jamaal Williams both tested -positive for Covid-19 and were on the field with the team.

Covid-stricken, the Packers will travel to San Francisco without Williams and Dillon, while Aaron Jones is unlikely to play either. It’s unfortunate for Dillon, who has started to see more carries in recent games and had his first career reception on Sunday (and made a nice move for extra yards, to boot — see video below). San Francisco has suffered a litany of injuries this year including losing Kittle and Jimmy Garoppolo last week. The 49ers are suddenly a tough team to pick, but if you’re feeling lucky, go for it (and perhaps while you’re at it, try your luck at a one deposit online casino).

Love: Brandon Aiyuk is the lone standing pass catcher from HC Kyle Shanahan‘s envisioned offense. With Deebo Samuels sidelined, Aiyuk had eight receptions on 11 targets for 91 yards and a score. UPDATE: Now Aiyuk is out with Covid-19 as well. By default, Trent Taylor looks like he’s in line for a big game.

Hate: Nick Mullens is in store for a bad day against a pass defense that will bring pressure. Expect Shanahan to minimize Mullen’s influence on the game.

The rumours that Will Fuller V could get dealt weren’t surprising as the Texans have one of the most expensive offenses and nothing to show for it. Jacksonville will likely be without QB Gardner Minshew because of a thumb injury.

Love: James Robinson is the engine that fuels whatever nightmare offense the Jaguars are running. He is officially solidified as an RB1.

Hate: D.J. Chark, coming off nagging injuries, will quickly need to get on the same page with a different quarterback. Consider him a hard sit.

Daniel Jones did his best Eli Manning impression (not a good thing, by the way) on Monday and now faces one of the NFL’s most pressure hungry defenses. It would be prudent to run more against Washington’s defense.

Love: Washington RB Antonio Gibson has the green light this week against a middling run defense and can make his money on dump-offs alone.

Hate: Terry McLaurin is a stud. But sometimes studs can have bad days. He will be covered by James Bradberry and is a touchdown dependent WR2 this week.

Lamar Jackson isn’t a good thrower and benefited from one of the easiest schedules last year. It is showing. The Colts offense will need to play perfectly to pull off an upset.

Love: J.K. Dobbins flashed the speed needed to advance the ball in between the 20-yard lines. His number will be called again, though he holds PPR risks.

Hate: Mark Andrews actually has a smash matchup against the zone heavy Colts D but the Ravens lack an ancillary tight end to effectively pull off the 13 formation.

It is time to officially ask if Detroit Head Coach Matt Patricia is even competent. The Vikings sport one of the most concentrated distributions of Fantasy points on a team.

Love: T.J. Hockenson exploded last week when Golladay exited with a hip injury; expect more of the same this week.

Hate: The entire Detroit backfield is a Jekyll and Hyde situation. Starting a running back from Detroit is more likely to give you an ulcer than Fantasy points.

Rumblings of HC Matt Nagy calling ineffective and even dead plays to Nick Foles circulated through the Fantasy community this week. The Titans will lean on Derrick Henry more than the passing game but A.J. Brown will remain the X-factor.

Love: Allen Robinson is due for a bounce back from last week’s anemic game planning.

Hate: Jimmy Graham was the invisible man last week against the Saints and can’t be counted on until he clears four catches for 60+ yards.

Carolina Panthers have had the right theories implemented in their offense, but have suffered from piss-poor execution come game day. Patrick Mahomes will have a surprisingly difficult day against a stingy zone defense.

Love: Clyde Edwards-Helaire is up against the worst run defense in the league. Even with Le’Veon Bell stealing some of his touches, expect CEH to touch the ball north of 20 times, average over five yards per tote and likely hit pay dirt as well.

Hate: Tyreek Hill might be in for a tough day, especially if Head Coach Andy Reid thinks it’s sufficient to just run the ball.

Seattle is letting Russell Wilson cook, and he is a damn good chef. Josh Allen and the back-sliding Buffalo Bills now have a chance to fire on all cylinders against Seattle’s NFL-worst pass D.

Love: John Brown (AKA Smokey) will leave Seattle’s dusty CBs in the dirt.

Hate: Devin Singletary is losing a lot of ground to Zack Moss and is up against a tough run defense.

Fresh off pulling out a W in a game Amazon gave them a four per cent chance of winning, the Broncos and Drew Lock travel to Atlanta for a very friendly date with league’s second softest defense. Atlanta will be without Calvin Ridley and can’t rely on its defense.

Love: Tim Patrick, not Jerry Jeudy, is the guy you want in Denver for smash spots.

Hate: Todd Gurley will smash helmets against a surprisingly soft run defense, but is unlikely to score against the NFL’s third-ranked red zone defense.

The Raiders are quietly putting some separation between them and the AFC cellar, and now have a chance to add to that lead against a demoralized Chargers team. Hopefully the Chargers play into the anger narrative and come out blazing for a game that could surprising be the highest-scoring slate of the week.

An inauspicious start to Tua Tagovailoa‘s career was overshadowed by Miami’s stellar defensive performance last week, but now the Dolphins will face a stiffer test in the Cardinals. Without Kenyan Drake, Head Coach Kliff Kingsbury is likely to lean on Chase Edmonds against Miami’s iffy run defense.

Love: Edmonds legitimately is an RB1 this week against Miami’s vulnerable run defense.

Hate: Christian Kirk had three great games in a row, but now is the time to trade or sit him.

We apologize to anyone who developed cancer watching the Dallas-Philadelphia game. Andy Dalton (Covid-19) might be sidelined for another week against the best defense in the league. On the flip side, Pittsburgh is poised to crush the Cowboys’ defense.

Love: The Pittsburgh defense against Ben DiNucci? Sign us up.

New Orleans will hopefully get both Michael Thomas and Emmanuel Sanders back because Drew Brees’ ADoT is abysmal. Tom Brady will get his shower partner in Antonio Brown on the field, immediately replacing Scotty Miller.

Love: Brown does everything Miller does, but does it better. We are certain Brady kisses AB on the lips.

Hate: Jared Cook has been a great fill-in when MT and Sanders were out, but now faces a defense that’s tough on tight ends.

Might we see a tank-for-Trevor Lawrence from HC Bill Belichick for this game? New York Jets are what we thought they were: bad.

Love: The New England defense will have a better time against the Jets. Anyone would.

Hate: Cam Newton looked a bit better last week, but might be in for a sneaky bad day against a good pass defense.

Originally a ska vocal group known as the Wailers, Bob Marley and Wailers quickly emerged to become reggae legends. Here’s one of the band’s classics, “Lively Up Yourself,” performed live at London’s Rainbow Theatre in 1977.

By Lucas Chan
This entry was posted on Wednesday, November 4th, 2020 at 6:08 pm and is filed under FOOTBALL, Lucas Chan, Worksheet. You can follow any responses to this entry through the RSS 2.0 feed. Both comments and pings are currently closed.