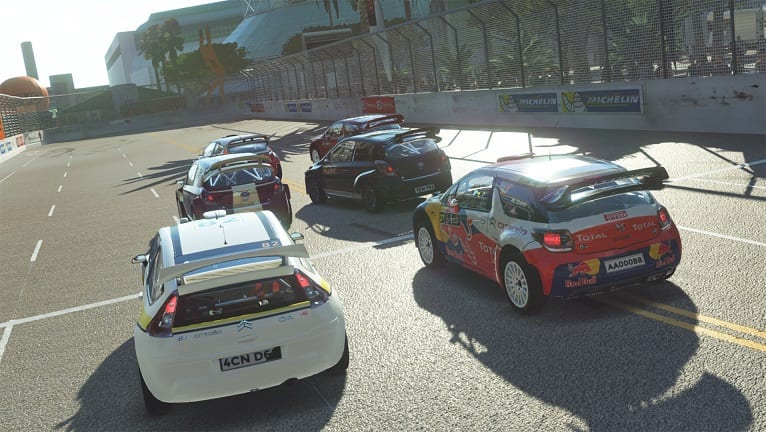 Red Bull not only provides wings, but tires and spoilers, too.

Controls are well done. Just as in real life, the faster you go the more focus it will take to control your vehicle. But that’s fine. All you need is convenient and well placed, so the driving is pretty intuitive. There’s no need to re-map (and you can’t anyway).

Two of our favourite features were the free-camera mode and the ability to rewind the action. The free-camera mode lets you pause the action so you can step back and get a 360-degree view of your car and driver. You can take screenshots, too, so we got a few nice shots of our Fallout 4-themed vehicle lurching off a cliff.

When you rewind the action, you can reverse out of a mistake, which is a nice feature. The bummer is that you can only rewind in timed sessions, not during races or free drive.

On first impression, this is a great game. There are tons of cars to choose from (over 50 vehicles) and all are well done. Some of these cars are truly iconic in the world of rally racing, so it’s fun to see them and learn all their quirks.

Graphics are clean and sharp. A number of nice background details (clouds in the sky, leaves on trees) add to the depth of field and make the courses appealing. Other details, such as gravel, dirt, ice, mud and snow are equally impressive.

On the downside, graphically, crowds standing beside the race course don’t hold up as well. Figures of people seem to blend into hills or trees occasionally, which is a bit odd.

In addition, gameplay can get a little glitchy when you get stuck in gravel, on rocks, or in the snow – basically any time your car gets stuck. When you’re not in a timed session, you won’t be able to rewind to fix your mistake, so you will have to re-start.

In the introductory narrative, the voiceover is assured and professional. This makes you feel like you are in good hands. This doesn’t last long, however, as a different narrator leads you through the actual gameplay. This second announcer can’t seem to muster enough enthusiasm to read the script with real passion, so he’s more likely to put you to sleep.

In terms of sound, the music is original, but it doesn’t make much of an impact. It’s just background filler. Engine sounds are crisp, true-to-life and authentic, which is very enjoyable.

Content is quick to load, which is sweet. There are different modes, so you can try out different cars, different off-road venues, or even follow different eras in Loeb’s legendary career.

Free drive, which takes place on different tracks or in timed sessions, is a great way to explore the variety of cars at your disposal. Each car has a unique response to the road’s surface, curvature, grade, or weather, so each vehicle has an enjoyable learning curve for the player.

This fun learning curve doesn’t translate to the actually rally races, however, which is disappointing. With no local or online co-op, it’s hard to muster the enthusiasm that such a supposedly adrenaline-pumping game should bring.

For a game that is supposed to give players a vicarious thrill of rally-racing with a true superstar, Sebastien Loeb Rally Evo is surprisingly unexciting. Between the glitchy action of repeatedly getting stuck (sometimes on nothing at all), the drab narrator, the repetitive and uninspiring music, and the option of only racing solo, there’s something lost in the translation of real-life rally racing to the world onscreen.