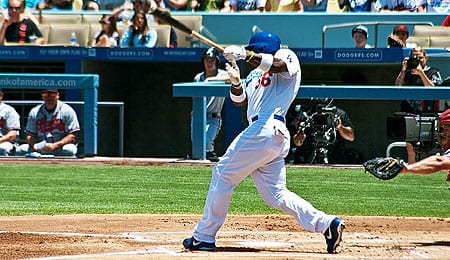 This team is full of notable names. Our angle was to get players with a proven power history or that are peaking. We met the home run cap (220) on the nose.

With this team, our only restriction was taking players that struck out less than 100 times. We created this team to see how fewer negative points could effect overall team performance.

This team is comprised of players that we believe will not only exceed their homer total from 2013, but set career highs in the process.

This team is a gaggle of veterans that we believe can put last year behind them. We have seen them do better in the past and we are so confident in them that as a whole, this team was 34 homers under the cap.

Now it’s your turn. Let us know in the comments below how you think Josh did in drafting his teams.

By Josh Johnson
Tags: RotoDerby
This entry was posted on Monday, March 24th, 2014 at 5:08 pm and is filed under BASEBALL, Fantasy Leagues, Josh Johnson. You can follow any responses to this entry through the RSS 2.0 feed. Both comments and pings are currently closed.